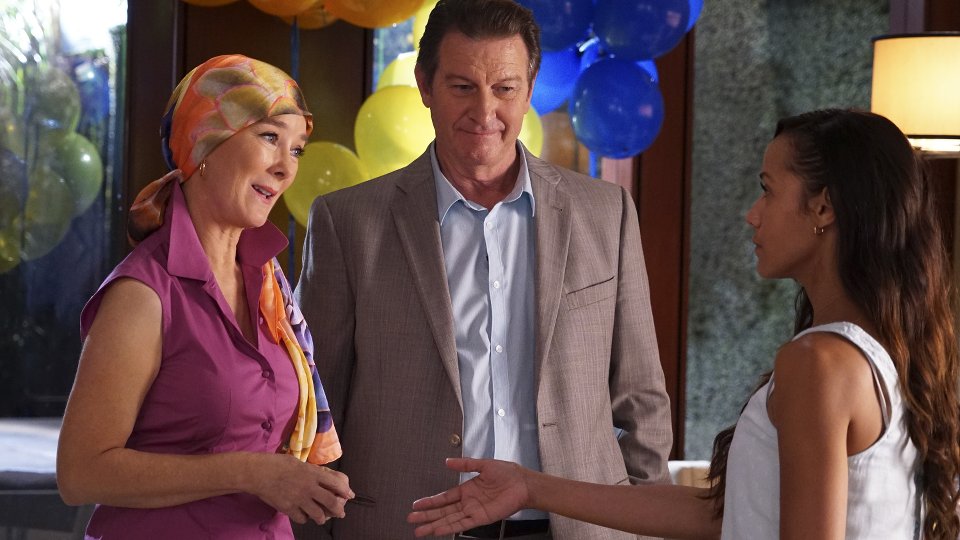 Spence (Grant Show) made his intentions towards Rosie (Dania Ramirez) clear as he helped her prepare for Miguel’s (Alejandro Vera) birthday party at the Stappord house. The two flirted with one another and began to kiss when the doorbell went marking the return of Ernesto (Cristian de la Fuente) from Mexico. Spence made his presence known and Ernesto told him that his help would no longer be needed now he’s back. Ernesto wasn’t happy that Rosie had been spending time with Spence and he warned her that Spence was tying to work him way back into her life.

Rosie asked Spence not to go to Miguel’s party because Ernesto didn’t want him there and he told her he was going. While Rosie was out, Ernesto met with Hector and they started to plot kidnapping Katy (Grecia Merino). At the party Hector arrived dressed as a clown so he could snoop around the house and find out some information about Katy while she was away with Taylor (Brianna Brown). Spence caught Hector taking pictures in Katy’s room and the two got into a fight in the middle of Miguel’s birthday party, which Ernesto joined in with. Rosie broke down and told Spence it was over and told him to stop fighting for her. Spence said he would stop fighting once he’d won her back.

Ernesto argued with Hector telling him that he’d jeopardised the plan. Hector told him that Spence saw him taking photos and offered to ‘take care’ of him. Ernesto told him to leave Spence alone and assured him he would handle it. Rosie and Ernesto started cleaning up the Stappord house and Rosie found the blood-stained cushion when she took the cover off to wash it. Spence, who was back at his apartment, was visited by Hector who punched him in the face.

I need some discipline tonight

Carmen (Roselyn Sanchez) wasn’t happy to wake up to Deion (Isaac Ryan Brown) going through her things. He’d also drawn a moustache on her face, which she didn’t notice until it was pointed out by Evelyn (Rebecca Wisocky) who wasn’t prepared to discipline him. Instead Evelyn took him to Disneyland and when she returned they were both full of stories about how much fun they’d had. Carmen exploded and told Evelyn she was turning Deion into a spoiled brat. Evelyn agreed he needed discipline and told Carmen that she was in charge of punishing Deion.

After he misbehaved, Carmen punished Deion by making him clean the house while she did nothing. Evelyn was alarmed when she found Deion cleaning the floors and confronted Carmen about it. She told her that her behaviour was unacceptable and told her she would be docking her wages. Carmen stormed over to see Marisol and asked her to do something about the way that Evelyn was treating her. Marisol explained Evelyn’s behaviour by telling her about the Powells’ dead son.

Later that day Evelyn heard Deion cursing whilst playing games and asked Carmen to deal with it. Carmen refused and started speaking about Evelyn’s late son to find out if that’s why she didn’t want to punish Deion. Evelyn spoke to Deion and took him to see Carmen so he could apologise to her for his behaviour. It was then revealed that Carmen had a baby when she pulled out a picture from a box she kept in her room.

Keep your nose out!

Marisol had coffee with Michael and they two got into a fight when she quizzed him about why he’d gone back to Olivia. She said she thought Olivia was up to something causing Michael to get angry before he stormed out. Not giving up, Marisol went to Olivia’s house under the ruse that she was going to see Jesse (Nathan Owens) but actually she was snooping. Jesse guessed what she was up to and the two got into a row when Marisol suggested that Olivia killed Blanca (Naya Rivera). He told Marisol that Olivia was battling cancer and there was no way she could have killed anyone.

At coffee with the other maids, Marisol discussed Jesse’s revelation and they all thought she was being unfair to Olivia. Michael went to meet Olivia for lunch who had used her cancer to get a table in a busy restaurant. Olivia told Michael that she didn’t have much time left and that her treatment wasn’t working. She asked him to move in with her and he agreed. Olivia returned home and asked Jesse to make up the guest room for Michael. Jesse then found a burger wrapper in the bin and started to get suspicious.

Olivia went to the Stappord house with Michael and told Rosie that she had designed the house. She was furious when the original coffee table was no longer in place and started raging about Taylor. Meanwhile Jesse went to see Marisol and told her that he’d been snooping in Olivia’s house. He didn’t find any medication for cancer but found proof that she’s faking having cancer to win Michael back. Marisol called Michael and told him that Olivia was faking her illness.

Michael confronted Olivia and she admitted that she was faking her cancer. He told her that he didn’t love her and would never come back to her before storming out of the house. Olivia went to see Marisol and went crazy pulling out a knife and lunging for her. Marisol asked if she murdered Blanca and she denied she did. Jesse ran into the house and was slashed by Olivia but Marisol managed to stop her by smashing a lamp on her head. Marisol took Jesse to the hospital and he told her that he was moving away because he wanted a quieter life.

Joy (Joy Osmanski) set Dr. Neff’s (John O’Hurley) plan into action to get rid of Zoila (Judy Reyes) this week. She asked Zoila if she could borrow some money from her and explained that Dr. Neff is broke. Joy also told her that he was using Genevieve (Susan Lucci) for her money and that Dr. Neff hadn’t paid her wages. Zoila told her friends about Dr. Neff’s financial situation and they advised her to tell Genevieve what was going on but Zoila said she didn’t want to get stuck in the middle.

When she arrived back to Genevieve’s house, Zoila interrupted Dr. Neff’s marriage proposal by pretending to be in labour. When they arrived at the hospital Zoila explained to Genevieve that she wasn’t in labour and needed to tell her that Dr. Neff was broke. She told her employer that she was being used for her money and Genevieve started to notice that Dr. Neff kept asking her for money. Dr. Neff tried to propose again and Genevieve stopped him to ask if he was poor. The doctor denied it and pushed Genevieve to tell him that it was Zoila who had been spreading lies about him. He asked Genevieve to sack Zoila or he would leave her.

Dr. Neff paid Joy for her help and Genevieve spoke with Zoila to sack her.