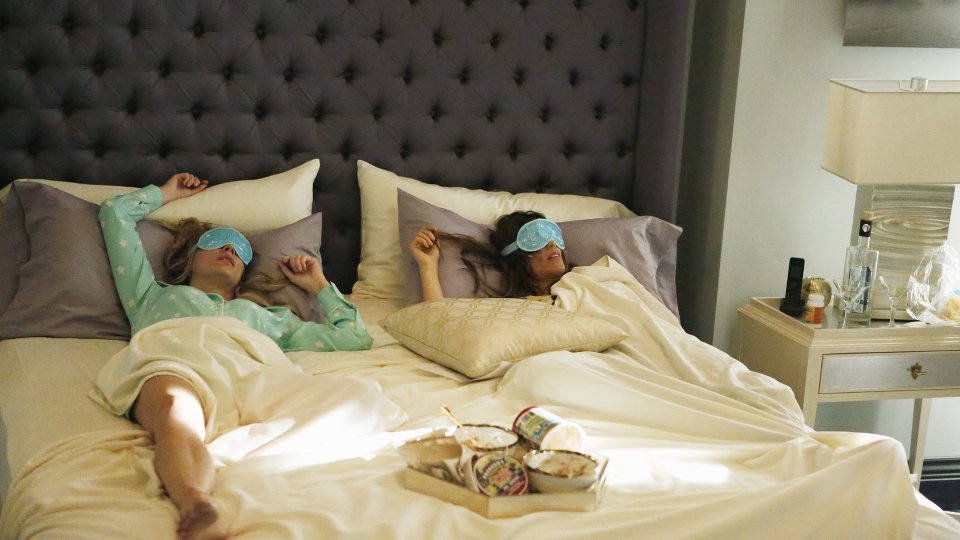 Karen started mingling and realised that she was feeling like a guest in Alec and Vivian’s relationship rather than an equal part. She suggested they leave and Alec and Vivian agreed with her. The next morning Karen told her lovers that Alec was right and explained her fears about being left with nothing if they break up. Alec surprised Karen by giving her a key to the house so that she could come and go as she wanted. Vivian added that they wanted her to live with them.

April (Rochelle Aytes) was delighted to discover that Lucy’s (Corinne Massiah) grades were improving but wasn’t all that happy when she found an essay talking about how her grandmother was her hero. April tried to talk to Lucy about her grades and she got shouted at for going through her backpack. Blair greeted them when April arrived at the school to drop Lucy off and he suggested that she invite her mother over as Lucy is identifying with her.

Turning to Joss (Jes Macallan), April debated whether or not to follow Blair’s advice. Still unsure what to do, April turned to Mark (Rob Mayes) and asked his thoughts pointing out that like him her mother is an alcoholic. He said it would be fine but asked more about her. April told him some stories about the way her mother was when she was younger and Mark told her that she had to do what she thought was right, not what Blair advised her. April admitted that she didn’t want her mother in the house and thanked Mark for his help.

Blair came over for dinner and she opened up to him about her relationship with her mother. Mark was left with the responsibility of looking after Lucy and Scotty and he took them to see some graffiti that April had done as a youngster. It was in a dodgy part of town and he ended up getting arrested when he tried to take them into a strip club so they could go to the toilet.

April and Blair were just getting cosy when her phone called and she had to go and pick Mark and the kids up from the police station. Mark tried to explain what had happened and Blair was condescending towards him. The next morning Mark was grumpy and even more disappointed when April’s mother arrived.

Joss and Calista (Jennifer Esposito) had a girls night and woke up with hangovers after drowning their sorrows following the latest hurdles in both of their love lives. Calista was still furious with herself for not reading the papers that Luca (Noam Jenkins) gave her to sign. She was most angry because he had betrayed her in business by stealing an accessories line. Joss tried to calm her down and refocus her on the plan to divorce Luca once she’s proven he’s cheated on her.

Calista returned the favour to Joss by telling her to have some fun now that she’s single again. She assured her that Joss would find her back to Harry (Brett Tucker) if they were meant to be together. Later that morning Luca told Calista that he wanted a divorce and told her that he was in love with someone else…the model that humiliated Calista during her fashion show. He rubbed salt in the wound by telling her the accessories line was his lover’s idea not his.

Joss bumped into old flame Brad (Marcus Rosner) during a chat with April. She was interrupted by a call from Calista who asked her to come right over. Calista talked to her lawyer to find out what the options were and Joss suggested that she tank the line. They hatched a plan to throw a press launch for Luca’s new line and Joss set about trying to organise the event. Luca was suspicious but Joss gave nothing away.

Brad called Joss as she was talking to Calista, and Calista told her to bring him to the party. Joss decided to bring Brad and once the party got under full swing, Joss wasn’t sure what Calista had planned for the evening. Brad tried to get hot and heavy with Joss but she told him that she didn’t want to get intimate with him because of Harry.

Luca made a speech during the party and Calista took over. She embarrassed him in front of the press by telling them that the factory her range used was employing underage children. The revelation meant that Luca couldn’t move forward with the line. Calista wasn’t as happy after the deed as she’d expected to be and Joss tried to assure her she’d done the right thing.

Mark went over to see Harry who was wallowing in self-pity following his break-up with Joss. He started to box up Joss’ things to try and help Harry move on. Harry then agreed to catch some waves with Mark, freshen up and return to work. On his return to work Harry was stopped by Ellis (Kavan Smith) who wanted to know how he was feeling. Niko (Emmanuelle Vaugier) was happy to see Harry and admitted she’d told Mark a lie to get Harry to return to work. She told him that the staff were hanging out after work and invited him along.

After work Harry tried to leave but Neko convinced him to stay. Harry was persuaded to stay after he saw a photo of Joss with Brad and became jealous. Harry stayed for drinks and a singsong and woke up the next morning with Niko in his bed. As if things couldn’t be more complicated, Neko told Harry that she was Ellis’ mistress.