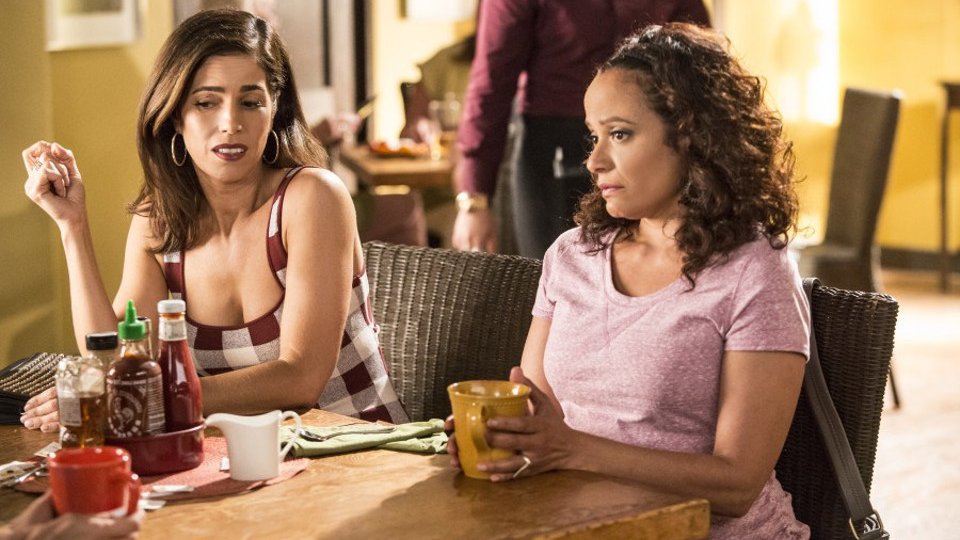 Rumours began to circulate about Taylor (Brianna Brown) in this week’s episode of Devious Maids.

Adrian (Tom Irwin) returned home from the hospital following his incident with Carmen (Roselyn Sanchez) and found Evelyn (Rebecca Wisocky) being much more caring that he’s used to. As she settled him down she introduced him to Deion (Isaac Ryan Brown), the child she adopted without agreeing it with him first. Suffice to say Adrian was pretty shocked by the revelation. Once the news sunk in, Adrian and Evelyn had a heated discussion and Adrian found out that Evelyn had bribed the adoption agency to get Deion so quickly.

Adrian set a plan into motion to get rid of Deion and used Sebastien (Gilles Marini) to do it. Sebastien told him that people were put off with the house’s history, which inspired Adrian to tell Deion all the grisly things that had happened there to scare him. Evelyn found Deion hiding in the cupboard the next morning and he told her he wanted to leave because of Adrian’s stories. In a last ditch move, Evelyn appealed to Adrian using their dead son to get him on side. When Adrian saw that Evelyn had already bonded with Deion, he called his P.I. to ask him to find the boy’s birth parents.

The kiss heard around the world

Carmen told Zoila (Judy Reyes) and Rosie (Dania Ramirez) what had happened with Jacklyn (Michelle Hurd) and told them she thought her new boss was in love with her. Zoila asked Carmen to show her how Jacklyn kissed her so she showed her using Rosie as a Jacklyn stand-in. The maids suggest that Carmen tackle the situation head on to find out what it meant.

For once Carmen actually did tackle things head on after nearly wimping out when she saw Jacklyn passionately kissing one of her employees. Eventually she came out with and asked Jacklyn if she was gay and things got even more awkward when Jacklyn misunderstood Carmen’s intentions and thought that she felt the same way about her. Following their awkward meeting Carmen spoke to Sebastien and he convinced her to set Jacklyn up so that he could catch her making a move on Carmen. That would mean that he could finally leave her and not lose any money.

Carmen went to Jacklyn’s for their ‘date’ and acted visibly nervous. During their chat, Jacklyn told Carmen that she knew Sebastien was having an affair. When Jacklyn went in to kiss her, Carmen admitted she couldn’t go through with it. She told Jacklyn to stop living a lie and end her marriage to Sebastien. Unfortunately for Carmen she also left her phone between the sofa cushions and when Sebastien returned home he called her and Jacklyn found the phone.

Marisol (Ana Ortiz) tried to get to the bottom of Taylor’s troubles but she didn’t get very far. Taylor asked her to stop asking questions and refused to give her anything. When she hit a brick wall with Taylor, Marisol turned her attention to Jesse (Nathan Owens) and tried to push him into getting a move on with his job applications. She also managed to steal a copy of his resume so she could do some job hunting on his behalf, without his knowledge.

Marisol met with a friend at the country club and was shocked to find out that Jesse was sacked from the club after violating the club rules. It turned out that he had an altercation with Louie Becker (Eddie Mills) leading Marisol to jump to conclusions very quickly. Trying to process the information, Marisol spoke to the other maids and they began to speculate about Jesse’s part in Louie’s death.

As she continued her investigation/snooping Marisol turned up unannounced at Jesse’s apartment. She found a reason to get him out of the apartment so she could search it and she found a gun in a case under his bed. Jesse arrived home as Marisol made the discovery and she pointed the gun at him. Jesse was furious that Marisol had been snooping and didn’t like what she was accusing him of. He explained that he bought a gun following all of the gruesome things that had been going on recently before asking her to leave.

Michael (Brett Cullen) visited Marisol to ask her if she would keep an eye on Taylor. He told her that he thought Taylor was in over her head but he refused to go into many details. He did however tell Marisol that Taylor was having an affair with someone but he didn’t know who.

Zoila wasn’t impressed when she discovered that Dr. Neff (John O’Hurley) had been rearranging her kitchen. She tackled him about it but he refused to apologise or agree to stop moving things around. He made it very clear that Zoila now works for him as well as Genevieve (Susan Lucci). Zoila tried to speak to Genevieve about Dr. Neff and was surprised when her employer took her new lover’s side rather than hers.

Realising she could do with a hand, Zoila wasn’t happy when she found out Dr. Neff had brought his own maid Joy (Joy Osmanski) to work at the house alongside her. Zoila confronted Dr. Neff and Genevieve and discovered that Genevieve was in on bringing Joy in to help. Upset Zoila had a row in private with Genevieve but her employer wouldn’t budge on her decision. Zoila tried to work with Joy but became irritated when she was going over the cleaning she’d already done.

Rosie was surprised this week to find a stash of porn magazines hidden under Miguel’s (Alejandro Vera) pillow when she cleaned his room. Not sure what to do she appealed to Spence (Grant Show) for help as Ernesto (Cristian de la Fuente) was out of town. Spence agreed to have a chat with Miguel to help Rosie out but that backfired when he inadvertently advised Miguel to make a move on a girl he liked not realising that girl was Katy (Grecia Merino). Miguel tried to kiss her and Katy pushed him away shouting a very violent sentence about dancing in his blood. Rosie confronted Taylor about Katy’s behaviour and found out that Katy had witnessed the murder of her father and the sentence she’d spoken was said in front of her at the time. Taylor told Rosie men were looking for Katy and asked Rosie to keep it a secret.

Angry, Rosie went to see Spence and lay into him. He was annoyed with her as he’d tried to help her out even after everything she’d done to him. Spence told Rosie how he felt about what she’d done and how angry he was over the way he’d been treated. When Rosie left it was revealed that Taylor was in his bedroom. Could they really be having an affair?