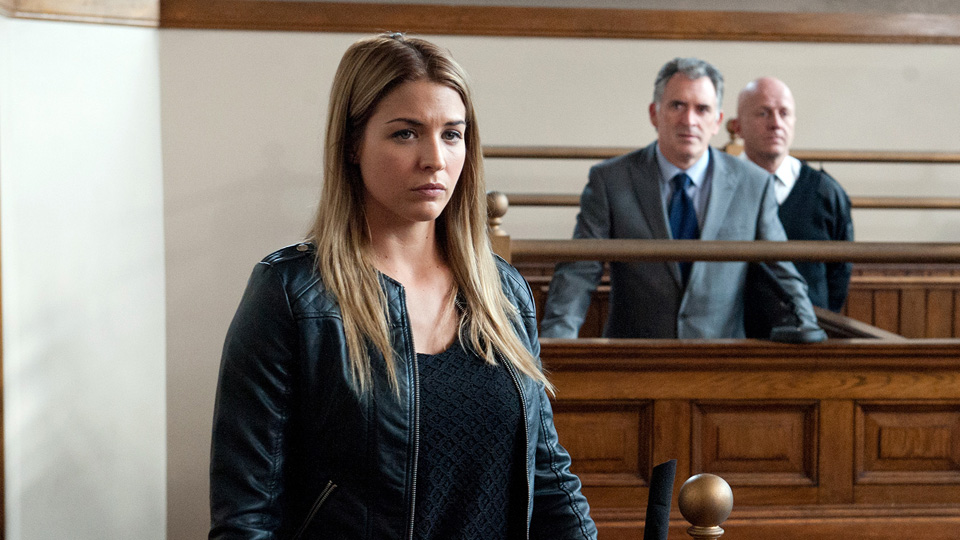 What’s in store for our favourite villagers this week?  Read on…

Will Carly come through for Bob?

A petrified Bob is led into court where a stressed out Brenda and Harriet await.  It’s not looking too good for Bob, but after a lunch recess, Carly surprises everyone by turning up.  Harriet urges her to make a statement and appeals to her conscience, leaving Carly in a quandary, but she obviously turned up for a reason and eventually tells the judge about her involvement in the fraud.

Harriet is still concerned about Ged and his threats and when Sandy falls asleep with the gas on, Harriet can’t help but worry this was no accident.  Bob tells Harriet they need to let their friends and family know so they can be vigilant.  After a sleepless night, Bob bargains with Ged to cease from harassing them but what deal has he made?

Belle sets her sights on Kirin, but is he interested?

Belle is excited by the prospect of going to a networking event with Kirin and when she asks permission from Zak and Lisa, is amazed to hear that Kirin has already approached them.  She lies to Joanie that her and Kirin are a couple and confides that she can’t talk to Lisa about sex.  Joanie gives Belle some advice, telling her to just be confident.  Could her advice backfire when later, Belle goes in for a kiss with Kirin?

It seems Kirin doesn’t feel the same way about Belle and she is soon left embarrassed.  Back at home, Lisa and Joanie end up telling her all their shameful stories about boys to make her feel better.

As Kirin prepares for the launch he’s impressed by how Belle is handling herself and there is no awkwardness.  He’s also excited that Vanessa has come along to support him.  Things kick off however, when Kirin walks in on Jai snorting coke.  Jai creates a scene in front of everyone gathered for the launch and Vanessa gets pushed to the floor in the furore.

Later, Vanessa has a twinge of pain and ends up at the hospital with Kirin there for support.  They are both shocked when the doctor tells them that Vanessa has gone in to premature labour and they are going to let it progress naturally.  As emotions run high at the hospital, Adam and Victoria arrive home to see all the missed calls.

Pete confides in James that he’s going to the doctors about his depression and is surprised by his support.

Kerry draws eyebrows on Dan as he frantically tries to get ready for his presentation.  He later decides that maybe he’d like to be a paramedic instead.

Alicia is keen to go to Portugal.  David wants to buy back the shop.  With the two on different paths could this be the end of the golden couple?  Meanwhile Pollard is still struggling with losing Val.

Rishi asks Megan to help out with a presentation only for Jai to refuse her help.

Marlon throws anniversary cards in the bin and worries how Laurel is coping, only to be put out that she appears to be handling the separation very well.