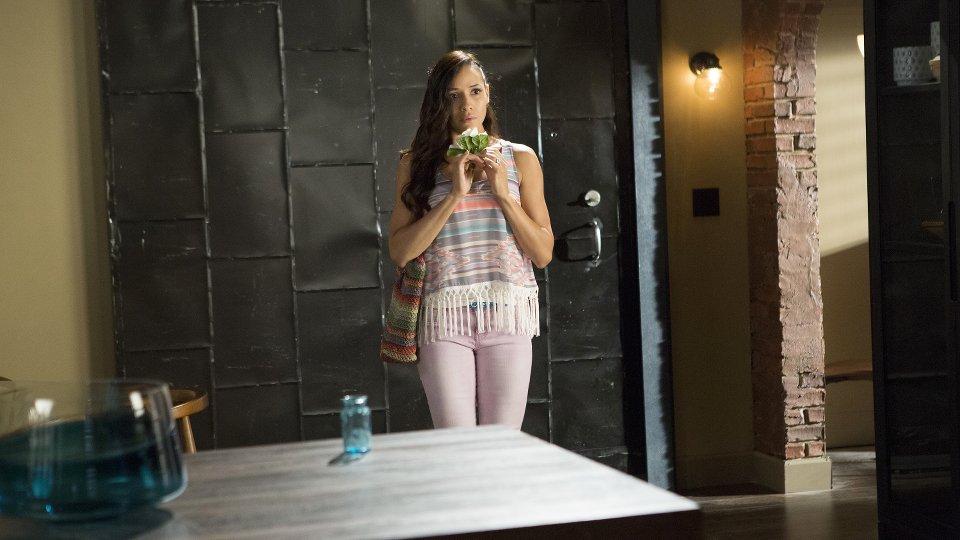 Rosie (Dania Ramirez) made a difficult decision and Carmen (Roselyn Sanchez) just about got away with her part in Adrian’s (Tom Irwin) S&M habit on tonight’s Devious Maids.

If you haven’t seen the latest episode of Devious Maids and want to avoid spoilers we suggest you stop reading now. If you have seen it and want to relive all of the action keep reading.

Evelyn (Rebecca Wisocky) arrived home and Carmen told her that Adrian had had a seizure. As she dug herself into a hole of lies, Carmen was thanked by Evelyn who embraced her and showered her with praise. After he recovered, Adrian was visited by Evelyn and his doctor, who wanted to know about some unusual injuries he’d found on his body. Adrian was forced to admit that he’s into S&M and his doctor warned him that he had to stop what he was doing or risk life-threatening health issues.

Carmen came clean to Evelyn about her part in Adrian’s accident with Marisol by her side. When Evelyn tried to sack Carmen, Marisol resorted to dirty tactics to make sure that Carmen kept her job. Evelyn agreed fearing that Carmen could sue her for Adrian’s behaviour. After finding out she still had a job Carmen saw Sebastien who revealed he had a plan to leave his wife.

Evelyn meanwhile confronted Adrian saying that she was ‘resolved’ about his behaviour. She told him if he agreed to give her a child then she would continue to turn a blind eye.

Marisol (Ana Ortiz) rushed to the hospital with Taylor and told Michael (Brett Cullen) that it looked like she had tried to commit suicide. Michael asked Marisol to look after Katy (Grecia Merino) whilst he sorted things out and Marisol told him she would find him another maid to take over from Blanca (Naya Rivera).

Back at the Stappord house Marisol tried to connect with Katy and questioned her about Blanca’s whereabouts. She didn’t get very far before Jesse (Nathan Owens) called her asking if she was avoiding him. Marisol arrived home and was surprised to find Jesse waiting for her. He had made her a nice dinner and Marisol started to let her guard down as the wine flowed.

During conversation Marisol admitted that she found Katy creepy and Jesse suggested that maybe Katy had seen some awful things before she ended up with the Stappords. That led to a lot of flirting and Marisol kissed Jesse. He pulled away and quickly left, leaving Marisol embarrassed. The next day Marisol told Carmen what happened and explained that she thought she’d misread the situation.

Marisol apologised to Jesse for the kiss and he revealed that he was worried about taking advantage of her because she was drunk. The two then wasted no time in continuing their rendezvous from the previous night.

Michael found the pills hidden in Katy’s room and confronted her about them. She admitted she had given them to Taylor because she thought they would make her happy. Michael lost his temper and Katy ran off. The next morning Evelyn found Katy sat on her doorstep and tried to find out why the little girl was at her house. Katy explained that she ran away and Evelyn took her back to Michael. As the episode drew to a close Michael explained to Katy that bad people were looking for her and that he and Taylor were doing what they could to keep her safe.

A tale of two husbands

Rosie dropped Miguel (Alejandro Vera) at Ernesto’s (Cristian de la Fuente) and was surprised when Ernesto took her on a trip down memory lane by celebrating their anniversary. During a coffee catch-up with Zola (Judy Reyes), Rosie asked if it’s possible that God could be angry with her for having two husbands. Zoila told her that it was up to Rosie whom she wanted to be with and she chose to stay with Spence (Grant Show).

When Spence returned home he found Rosie was in the mood for seduction…until lightning struck and then she feared it was a sign from God that she was sinning. The next day Rosie went to see Ernesto and asked for a divorce but he refused to sign it. Ernesto then made a move on Rosie, which she reciprocated leaving her even more confused.

Rosie returned home and in tears she told Spence that she had to leave him because she didn’t want to hurt him. She admitted that she still had feelings for Ernesto and that she was confused about what to do. As she figured out her next move, Rosie agreed to be the Stappord’s new maid.

Zoila received a surprise visitor when her outrageous sister Reina (Justina Machado) showed up at Genevieve’s (Susan Lucci) house. The tension was obvious from the outset but Zoila was too polite to ask her to leave. Reina told her that she was going to stay with her whilst Genevieve was on holiday. It didn’t take long for Zoila to realise that her sister was going to be a nightmare and she asked her when she was going home. Reina broke down and told her that she was divorcing her husband. Zoila went to visit Reina’s estranged husband and found out that her sister had been enjoying flings with a variety of men including Zoila’s late husband Pablo (Alex Fernandez).

Later Zoila confronted Reina and threw her clothes at her from the balcony. As she stormed down the stairs asking Reina to leave, the women got into a fight and Zoila fell down the stairs. Reina took her to the hospital and promised to stay with Zoila once they found out that the baby was unharmed in the fall.