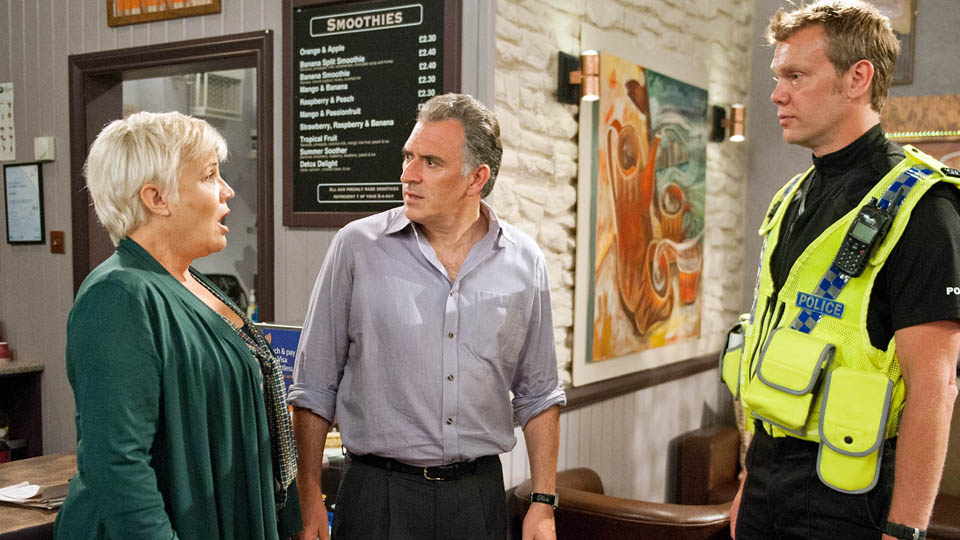 Have you recovered from the explosions, confessions and deaths of last week?  At EF we’re still gutted that Val and Ross are no more – two of our favourite characters!  Life goes on however and the villagers are still in shock after last week’s events and this week one person’s confession causes a split in the village.  Could a resident find themselves facing the wrath of an angry crowd?

Read on to see what else is in store…

Good old Bob sets up a ‘clear up committee’ to help get the village back in order.  He even speaks to a journalist about it but it seems the article isn’t in his favour.  Brenda is outraged at the negativity towards him and after an altercation, Bob is shocked to be arrested for breaking his bail conditions meaning he might be sent straight to prison and not see Brenda in years.

Pollard is incredulous, when Brenda asks him to write a letter in Bob’s defence to send to the court asking for leniency.  Harriet offers to help by trying to track down Carly so they can use her as a character witness, unwittingly setting up Bob for painful consequences when he finds himself at the mercy of Ged; a nasty piece of work that Harriet helped send down when she was in the police force and now Bob’s cell mate!

When Brenda gets word that Bob has had an ‘accident’ and has been transferred to the hospital, it doesn’t take Harriet long to realise it must be Ged’s work.  She forms a plan to track down Carly.  Meanwhile, Ged makes it clear to Bob that he wants to exploit his relationship with Harriet and won’t take no for an answer.

Megan plans her revenge on Jai

Leyla is disheartened to hear that Jai won’t be leaving Megan just yet.  Meanwhile, Megan is planning her revenge on Jai and promises Rachel that she will have Archie back soon with Jai getting his comeuppance.  However, Megan has another situation to deal with first when she takes a pregnancy test.

Megan’s plan is put into action as she hides cocaine in Jai’s car, but he almost catches her in the act and makes a call to his drug dealer and realises her plan to frame him.  Soon he’s managed to turn the tables on her and as she’s just phoned the police to tip them off, she is forced to tell Jai her big news leaving him with a quick decision to make.

As the custody hearing approaches, Sam has spent the night in a van after Rachel punched him in the ribs, leaving her to fear she’s lost him for good this time, but luckily he tells her that he will be there at court.  Jai is surprised when Megan asks him to do something.  Later, Megan says she’s not feeling great and will meet Jai at the court.  Soon after Leyla confronts Megan and the pair hurl abuse at each other, neither expecting what happens next.  Jai is none the wiser as he anxiously awaits Megan at court knowing that he needs her beside him at the hearing.

When Belle Dingle offers Kirin some of her Granny’s cordial, his business brain kicks into gear and he soon has an idea.  Vanessa sees green when she finds Kirin and Belle doing a taste test in the Woolpack and Rakesh is disappointed that his son still doesn’t want to go to University.  Does Vanessa have anything to worry about?

Alicia and Priya tease Bernice when the find out she’s cooking for Lawrence in an attempt to kick start a romance.

April is confused by Marlon and Laurel’s situation.

Paddy tells Marlon that he wants to set him up with an online dating profile to help him move on.