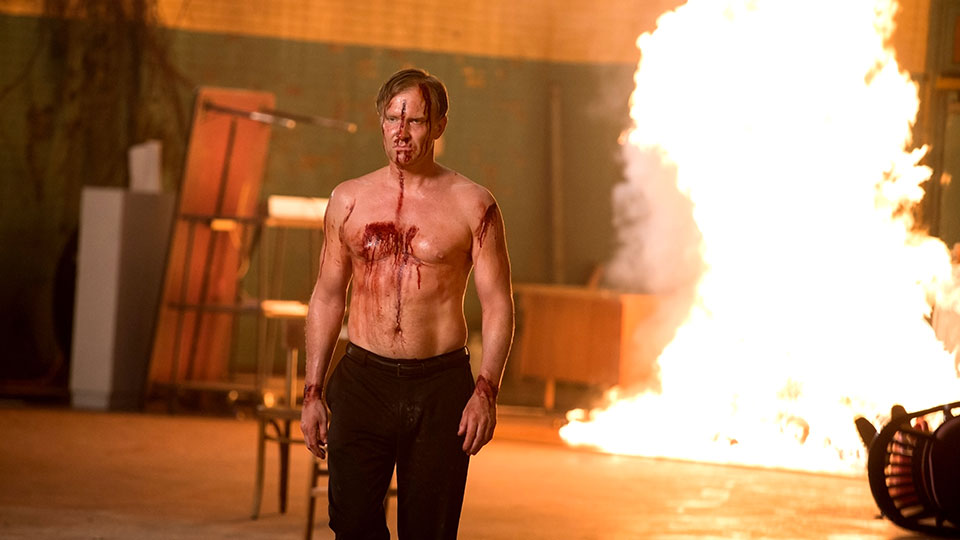 The stage is set for an epic showdown as Banshee aired the penultimate episode of its third season tonight in the UK.

We got a bit of backstory on Hood (Antony Starr) and Job’s (Hoon Lee) relationship in this episode. The two met when Hood was sent to kill Job by his employer Mr. Dalton. Job managed to talk his way out of it by convincing Hood that they both had targets on their back. That paved the way for a long and fruitful friendship and we almost found out what Hood’s real name was.

In the present Job decided to distance himself from Hood after nearly being killed because of his friend’s distraction. Hood tried to make amends in his own way but Job wasn’t interested.

Proctor (Ulrich Thomsen) and Emily (Tanya Clarke) came face-to-face with Frazier (Ron C. Jones) this week. As Proctor was beaten to within an inch of his life, Emily watched on helplessly. Proctor got his own back on one of his torturers by biting off part of their nose and things looked very bleak for both Proctor and Emily.

Rebecca (Lili Simmons) tried to get Hood to rescue Proctor but he wasn’t interested. She then appealed to Brock (Matt Servitto) by telling him that Emily had been taken too. Brock then twisted Hood’s arm and the two went to find Proctor. Upon arriving, Hood made it clear that they weren’t interested in saving Proctor and Frazier agreed to let Emily go. Brock dragged his ex-wife away from the scene as she fought to try and save Proctor too.

As Hood and Brock were leaving, Rebecca and Burton (Matthew Rauch) were arriving. As they made their way into the building and started breaking down the door that kept them from Proctor, Frazier left and Proctor managed to put up a good fight as Frazier’s men tried to douse him in petrol. He broke free from the chair he was tied to and shot his attackers. As Rebecca and Burton broke through the door, Proctor set fire to Frazier’s men.

Burton drove Proctor to Emily’s house where he broke off their fledgling relationship before telling her that she should be scared of him.

Deva (Ryann Shane) continued her descent into teen angst this week when she was caught doing drugs in a park by Billy (Chaske Spencer). After attempting to flee, Deva was caught by Billy and hauled to the Sheriff’s Department. He contacted Gordon (Rus Blackwell) who decided that his daughter should spend the night in jail. Hood had other ideas though and set Deva free.

In what we’re sure is going to prove to be a terrible decision, Bunker paid a visit to his former Neo-Nazi friends and picked a fight. It almost ended with Bunker killing one of them but he stopped himself as it was revealed that his brother Calvin was the leader of the pack.

Colonel Stowe (Langley Kirkwood) put the next part of his plan into action as he kidnapped Sugar (Frankie Faison), Job and Carrie (Ivana Milicevic). The three were taken to Camp Genoa were they were held separately. Carrie was tortured in a bid to get her to reveal the fourth member of their heist team but she refused to give up Hood’s name.

Meanwhile at Sugar’s bar, Hood arrived to find bullets in the walls and on the floor. As he investigated Gordon walked through the door furious that Hood had taken Deva home. With more pressing matters on his mind, Hood asked Gordon where Carrie was and it soon sunk in that Stowe was getting payback.

It’s also worth noting that Carrie and Gordon shared a scene earlier in the episode where they discussed whether or not to go through with their divorce. Can they rebuild their relationship? We guess the season finale will tell us next week…

Banshee continues Thursday at 10pm on Sky Atlantic HD. Preview the season finale We All Pay Eventually below: