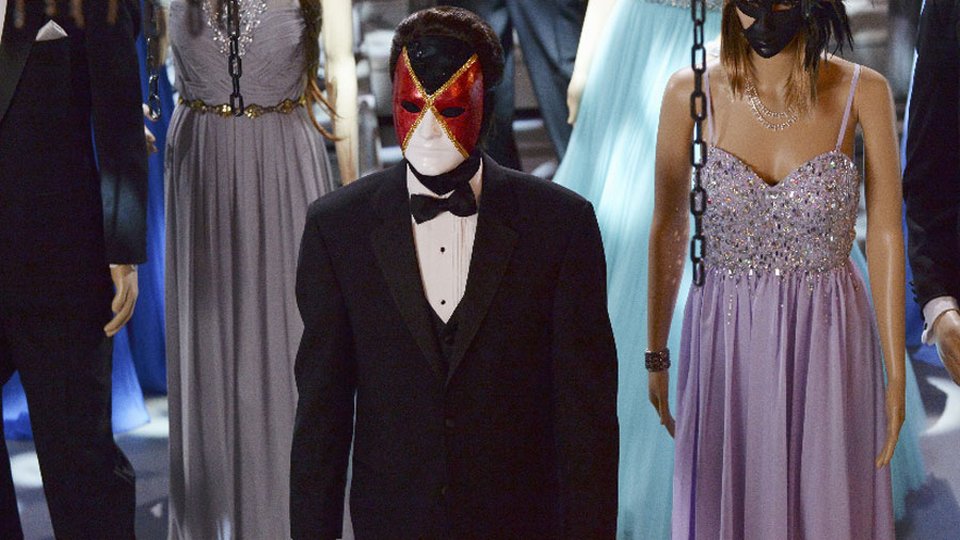 Pretty Little Liars is promising to unmask A in just under two weeks time and fans have been speculating wildly about who it could be.

If you want to avoid spoilers and speculation about Pretty Little Liars we suggest you stop reading now. If you want to find out our thoughts then keep reading.

At the end of season 5 it was revealed that A is called Charles DiLaurentis. Since that revelation Aria (Lucy Hale), Spencer (Troian Bellisario), Hanna (Ashley Benson), Emily (Shay Mitchell) and Alison (Sasha Pieterse) have been trying to figure out exactly who Charles is and what happened to him when he was a child. Kenneth DiLaurentis (Jim Abele) claimed that Charles died in Radley as a child but Mona (Janel Parrish) has since found proof that he is actually still alive and well. Not only that, but he escaped from Radley the same night as Bethany Young, the girl who was found in Ali’s grave.

In the last couple of weeks the liars have come close to unmasking A / Charles and in the latest episode Red Coat was shown to be back working with him. The episode also threw in new character Rhys Matthews (Caleb Lane) who looked very like Jason DiLaurentis (Drew Van Acker) and was involved with the mysterious Carissimi Group.

Another curveball came our way when it was revealed that Ali and Jason had known Charles when they were kid but thought he was a cousin of theirs called Freddie! Show creator I. Marlene King has assured fans that Charles is someone who was in the very first episode of the show and that clues have been dropped throughout the show’s run.

As we scratch our heads and look at all of the evidence, we’ve revisited the first ever episode of Pretty Little Liars to see who Charles DiLaurentis could possibly be. We’ve also got some theories on red coat so keep reading to find out…

We highly doubt that Charles / A or Red Coat will turn out to be one of the liars. Aria, Spencer, Emily and Hanna have really been through the mill since season 1 and we just can’t see any of them being responsible for the torture they’ve all been put through. The same goes for Alison. Sure the girl knows how to spin a good yarn and she’s behaved terribly (faking her own death was pretty cruel) but we don’t think she’s anything to do with Charles either. A lot of fan theories are quick to jump on Aria claiming that she is really A but we don’t think there’s any truth to that.

Mona is one of the more slippery characters in the show and she was already revealed as A once before. As always we’re sure she knows much more than she’s letting on but we don’t think that she’s really Big A.

Both Ezra Fitz (Ian Harding) and Toby Cavanaugh (Keegan Allen) have been used as red herrings in past seasons. The likelihood of either of them being A / Charles is pretty slim. Similarly Emily’s ex-girlfriend Maya (Bianca Lawson) was killed in the first season so we’ve no idea how she could turn out to be A. We know that characters come back from the dead all the time but we’re not sold on the idea that Maya could come back.

Byron (Chad Lowe) and Ella Montgomery (Holly Marie Combs), Pam Fields (Nia Peeples), Ashley Marin (Laura Leighton) and Jessica DiLaurentis (Andrea Parker) were all in the first episode of PLL. The only person in this group that we can see having anything to do with the girls’ torment is Jessica but last time we saw her she was definitely dead.

The family and extended family

Now this is a more likely bunch of suspects. Melissa is definitely heavily involved with the A / Charles thing and she’s currently supposed to be living in England with Wren. Do we think she’s Big A? No but she could definitely be a contender for Red Coat and if she was working with Wren maybe, just maybe he is A / Charles?

Of the other suspects in this category we don’t think it’s Mike and Ian was pretty dead last time we checked.

Well firstly Detective Wilden is dead (we think) so that would discount him. Jenna is vindictive but we don’t think she’s capable of masterminding an operation as big as A’s. As for Meredith, we barely even remember who she was so we doubt she’s anything to do with it.

And what about Red Coat?

We already speculated that Melissa could well be Red Coat. Over the show’s run so far the most likely candidate is CeCe Drake (Vanessa Ray) but it could conceivably be Sara (Dre Davis) too, especially as Red Coat reappeared after she moved out of Emily’s house.

If I. Marlene King is telling us the truth and A / Charles is someone who appeared in the show’s very first episode, then we can’t see it being anyone other than Wren. If A / Charles does turn out to be Wren then we wouldn’t be surprised if Melissa was Red Coat but our gut tells us that is still CeCe.

What do you think PLL fans? Do you have an alternate theory as to who A and Red Coat could be? Leave your comments in the usual place.