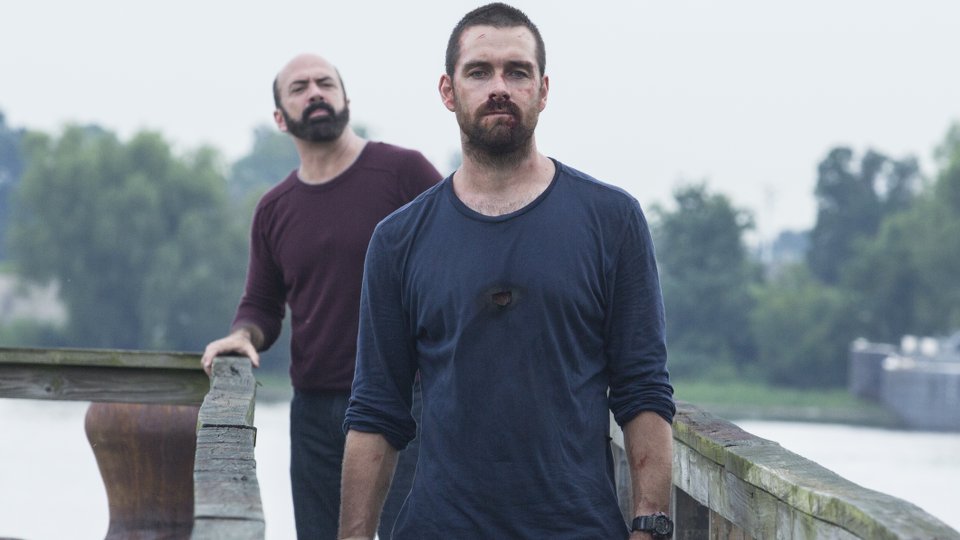 A long-running feud came to a bloody end in the latest episode of Banshee.

An eye for an eye

Hood (Antony Starr) and Brock (Matt Servitto) tracked Chayton (Geno Segers) down to New Orleans this week. After a false start, they found him in an underground fight club and Hood unwisely decided to try and take him on publicly. That of course backfired and when Brock pulled a gun to try and stop the fight, they were both escorted out. Knowing that Chayton would come after them, Hood and Brock sat tight at a hotel and shared a few beers.

After falling asleep briefly, Hood woke up to find Chayton stood over him and ready to fight to the death. A knife fight broke off and Chayton once again for the upper-hand, despite Hood seriously wounding him. When Brock came to Hood’s rescue, Chayton escaped but Hood gave chase and followed him to a graveyard and then to the docks. Chayton goaded Hood and he finally exacted his revenge by blowing a whole in his stomach then blowing half of his face off.

Brock helped Hood dispose of the body and the two talked about returning to Banshee with Hood explaining that he didn’t have anything to go back for. In a rare moment of bonding, Brock told him he didn’t care who he really was or what his past was and dangled the carrot of taking down Proctor as a reason to return.

You can’t con a con man

Sugar (Frankie Faison) proved to be a soft touch when he gave his money from the heist to the son of a former boxing competitor. Feeling bad for a fight gone wrong years earlier, Sugar handed over a huge wad of cash to the man’s son but Job (Hoon Lee), quite rightly, smelled a rat. It turned out that the boy’s father had died years earlier and his son had turned into quite the convincing con artist. Job confronted the boy and beat him down before taking the money back and returning (most of it) to Sugar.

Rebecca (Lili Simmons) took no notice of Burton’s (Matthew Rauch) warning and continued to operate behind Proctor’s (Ulrich Thomsen) back. Burton noticed there was more profit in the business than there should have been but Proctor didn’t seem to care too much about it. Burton immediately sought out Rebecca and caught her in the act of violating Proctor’s deal with Mr. Fraser. Worried that Burton would rat her out, Rebecca tried to use her sexuality to appease Burton but got a surprise when she reached into his pants only to discover he wouldn’t be able to reciprocate even if he wanted to. She then turned mean girl and warned that he would likely get rid of him, and not her, if he found out the truth.

Burton informed Rebecca that he wouldn’t tell Proctor and we learned a bit more about how Burton and Proctor came to know each other. When they met Burton was being held captive and it was Proctor, and a whole bunch of violent murders, that set him free. By the episode’s end Burton’s decision not to tell Proctor what Rebecca was up to backfired when Proctor was hauled off, along with Emily (Tanya Clarke) by Mr. Fraser’s men whilst his family – with whom he recently reconciled – looked on. Rebecca tried to stop them by shooting after the car but she failed and her family watched on in horror.

Putting the pieces together

Colonel Stowe (Langley Kirkwood) was still smarting from the Camp Genoa heist and it seems he’s on to Carrie’s (Ivana Milicevic) trail. Turning up at the diner while she was working, Stowe sat there making pleasant conversation with his ex-lover but little did she know that he was going over the aftermath of the heist in his head. He knows how the heist was pulled off but he’s not 100% certain of who was involved. It does seem though that he knows Carrie was a part of it. Uh oh!

Banshee continues Thursday at 10pm on Sky Atlantic HD. Preview the next episode Even God Doesn’t Know What To Make Of You below: