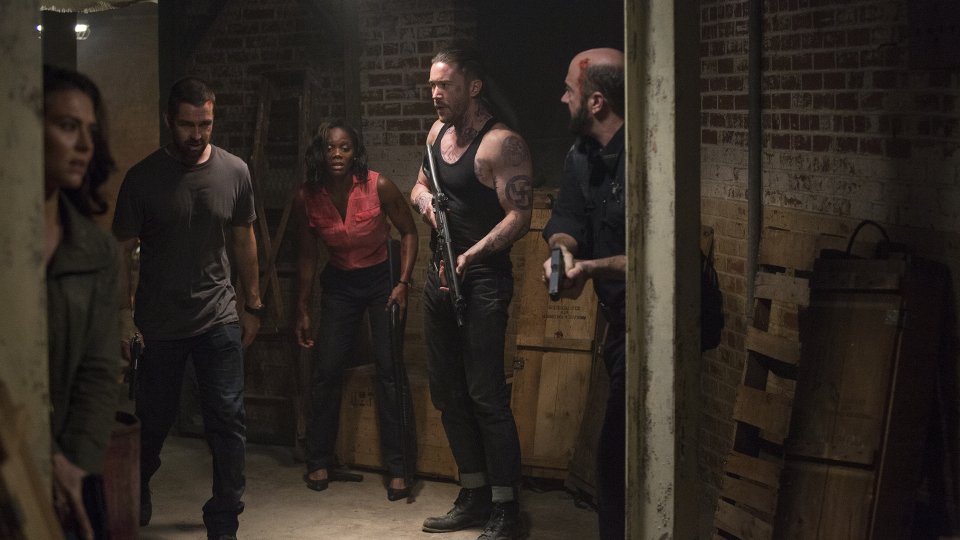 Chayton (Geno Segers) escalated his war to shocking new extremes on the latest episode of Banshee.

If you haven’t seen the latest episode of Banshee and want to avoid spoilers we suggest you stop reading now. If you have seen it and want to relive all of the action then keep reading.

Picking up exactly where things left off, Hood (Antony Starr) and co were trapped in the Banshee Sheriff’s Department as Chayton and the Redbones opened fire. Just before Chayton and his army managed to storm the building, Hood hit the emergency button, which brought bullet-proof gates down over all of the windows. It bought Hood some time as he considered his next move whilst an infuriated Chayton quickly escalated outside. Inside everyone realised the phones were down and their cells jammed so they couldn’t call anyone for help.

The next play from Chayton was to kill the power so the building was plunged into darkness but Hood and Siobhan (Trieste Kelly Dunn) managed to get it back on with the back-up generator. Siobhan took the opportunity to get a few more angry pop shots at Hood about him not being a real police officer and telling him she doesn’t need to listen to him anymore.

Chayton’s next move was to blow a huge hole in the gates by using a more powerful gun. Hood and co managed to block the hole using filing cabinets to try and keep Chayton and his men out of the building. Chayton asked for Raven (Chaske Spencer) and Proctor (Ulrich Thomsen) to be handed over to him but Hood refused.

No one was particularly pleased to see Kurt Bunker (Tom Pelphrey) trapped inside the building and when he took his top off to reveal his Nazi tattoos, Alison (Afton Williamson) warned that she may have an accident with her gun and shoot him. Nice! Bunker was told to escort all of the civilians down to the basement, after Hood told him he was hired, and guard the door down there to prevent the Redbones from infiltrating the building that way.

It was a good call by Hood as the Redbones wasted no time in blasting their way through the door. Before they did break through, Bunker explained about his abusive father to Alison but she told him it was no excuse. Once the Redbones came through the door Bunker held them off as long as he could but one of them injured him. In a surprise move, Alison came to the rescue and killed the Redbone allowing Bunker to recover and continue to defend the building.

Proctor pleaded to be let out of his cell but Hood refused. His lawyer tried to get him out but was shot in the head during his efforts. He eventually managed to get his hands on the keys to his cell as Alison was being strangled by a criminal in the next cell. Proctor walked past but decided to help her by shooting the man attacking her so he let go of her neck. Teaming up with Hood, Proctor took a gun and they guarded the entrance to the building, which Chayton and the Redbones were prising open using a truck. The gate came up and Hood and Proctor killed several men before taking one of their grenades and throwing it at the truck. The explosion caused the gate to fall back down giving them extra protection.

Proctor went down to the basement where Hood let him leave on the condition that he called for help. His decision didn’t go down well with Brock (Matt Servitto) or Siobhan and Proctor warned that if he made it out alive there was unfinished business between him and Hood.

Deciding that the only way to stop the war was to hand himself over, Raven removed the filing cabinets and appealed to Chayton who told him it was too late for negotiation. Instead Chayton shot him with an arrow and Siobhan dived at him to save his life. She moved him out of harm’s way and took the arrow out of his shoulder before giving him a gun and hiding him.

Shortly after Siobhan and Hood reconciled and he told her his real name (we didn’t get to know what it was!), Siobhan found herself attacked by one of the inmates after saving Raven’s life. A bloody fight ensued and Siobhan killed the man with a machete. As she caught her breath, she didn’t see Chayton enter the building behind her. When Hood went to find her, he saw Chayton holding her in a headlock threatening to snap her neck. Hood was attacked from behind and as he lay dazed on the floor, Chayton snapped Siobhan’s next and let her limp body drop to the floor.

After that backup arrived so Chayton and his remaining Redbones left leaving Hood furious and out for revenge.

Whilst the war was going on at the Sheriff’s Department, Proctor’s mother was hanging on to life as she waited for him to return to her bedside. Rebecca (Lili Simmons) was on hand but Proctor only arrived once his mother had died. We reckon that’s even more unfinished business with Hood then…

Banshee continues Thursday at 10pm on Sky Atlantic HD. Watch the promo for next episode We Were All Someone Else Yesterday below: