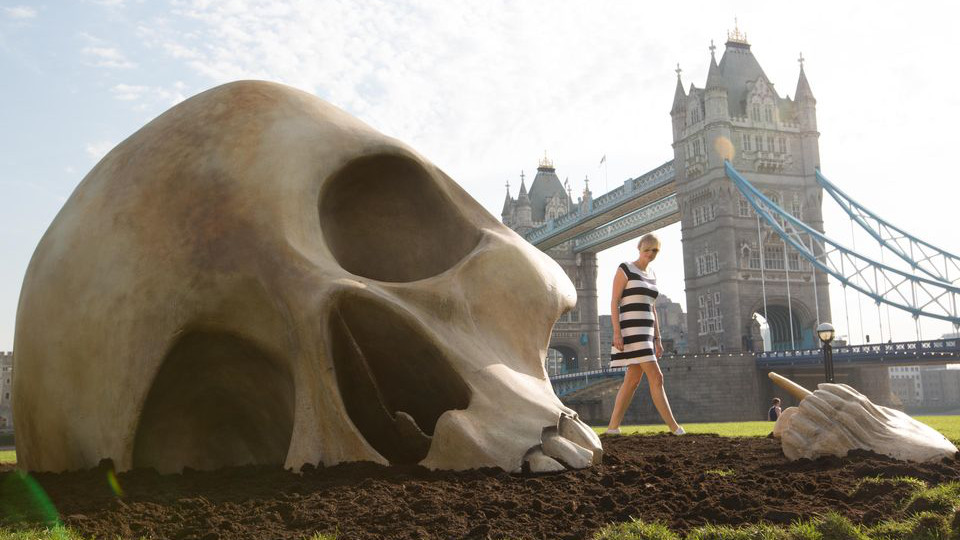 A two-metre high installation of a human skull mysteriously appeared on London’s South Bank this morning complete with forensic investigators and cordoned off by police tape.

The magnified crime scene was specially created by TV channel Alibi to celebrate their summer season of crime drama.

[quote by=”Adrian Wills, General Manager of Alibi”]Our dramatic installation pays homage to the moment that features in many thrilling crime dramas; the unexpected discovery of human remains that triggers an investigation into how and why it came to be there. And because the channel celebrates the biggest crime dramas on TV, we decided to super-size this crime scene and really get people talking.[/quote]

The unique build took a design team four weeks to create. The centrepiece skull was carved from high density polystyrene with a polyurea hard coat finish. Scenic carving skills were used to finish the texture and create depth, and techniques such as sponging and stippling as well as colour washes were used to create shadowing effects. One tonne of earth dressed the scene, making it appear as though the huge skull had just been discovered from the earth.

Fans of crime drama should check out Alibi for premieres of hit US series like Castle and Rizzoli & Isles and brand new US shows including Reckless and Crossing Lines. The channel also features shows such as Sherlock, Inspector George Gently, Luther and Death in Paradise as well as old favourites that include Dalziel & Pascoe, Diagnosis Murder and Miss Marple.

Have you been to check out the crime scene? Let us know in the comments or tweet your pics with #AlibiSkull

Advertisement. Scroll to continue reading.
In this article:Alibi, Crime Drama