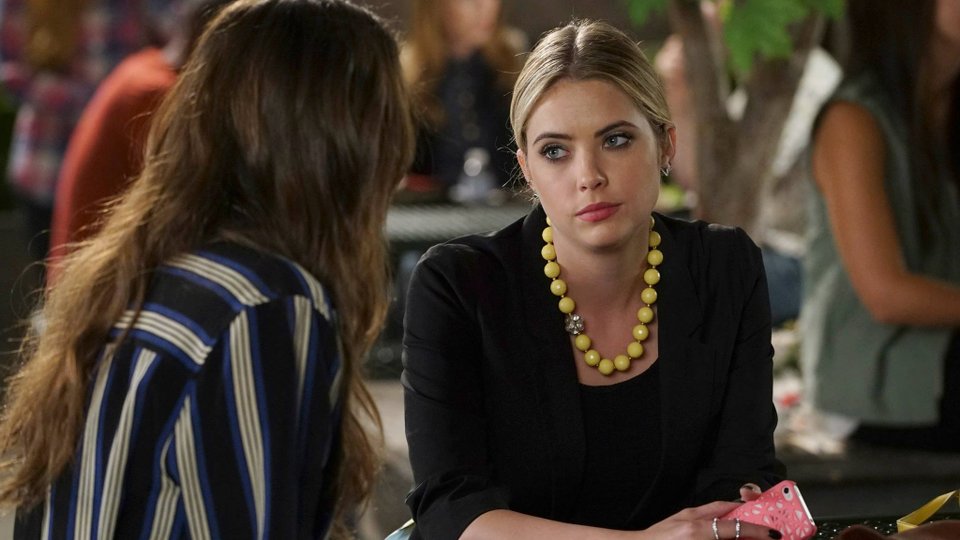 The mystery of who ‘A’ is continued to deepen this week and took a surprising twist.

If you haven’t seen the latest episode of Pretty Little Liars and don’t want any spoilers, we suggest you stop reading now. If you have seen it and want to relive the action then keep reading.

Coming down from a nightmare

Spencer (Troian Bellisario) had a nightmare about a decrepit room that featured a creepy dancing girl (Maddie Ziegler) and shortly before the dream ended, she saw ‘A’ approaching her. The next morning she recalled the nightmare to Hanna (Ashley Benson) whilst chomping away on pot brownies. At school Hanna noticed that Spencer seemed different and asked if she was high but Spencer denied it quickly moving the subject along. Later on Spencer attended a meeting where she tucked into the free refreshments and spotted her old sponsor Dean (Nathan Buzolic). She tried to sneak out of the meeting but got caught and Dean gave her a lift home. When Spencer tried to defend her drug use, Dean told her it was all or nothing when it came to addiction and Spencer handed the pot brownies over.

Mona (Janel Parrish) returned to Rosewood this week and was first seen hiding behind giant shades in Hanna’s kitchen. She revealed that she was back in town as the police wanted to investigate her and may press charges against her for faking her death (that seems a bit harsh doesn’t it considering her fake death attempt was trumped by a kidnapping?). Hanna decided to get Mona out of the house and they went to the Brew where they bumped into Mona’s old friend Lesli Stone (Elizabeth McLaughlin). It’s safe to say that Lesli wasn’t at all pleased to see Mona and she tore a strip off her old friend for tricking her into perjury. Like Mona, Lesli was also due to speak to the police and could be charged.

Angry at how Lesli had treated Mona, Hanna contacted her and the two met once again in the Brew. Hanna pleaded with Lesli to try and forgive Mona but she was having none of it. Lesli also tried to dissuade Hanna from going rogue and investigating Radley without the help of the police.

Aria (Lucy Hale) continued to distract herself with photography and her new friend Clark (Titus Makin Jr.). When Clark said he needed to retake his photographs as he feared his previous work wasn’t up to scratch, Aria jumped at the chance to go with him. During their shoot, Aria lined up lots of creepy dolls for pictures and was surprised when she caught Clark photographing her. During the setup for one shot Aria saw a hooded figure in the mirror but when she turned round it was gone. Later in the dark room, Aria helped Clark hang up his reels and noticed that he’d caught a picture of the hooded figure, which he assumed was ‘A’. She stole Clark’s reels and took them home for further investigation and discovered that the outline of the figure was female. Could ‘A’ be female?

The emancipation of Sara

Sara (Dre Davis) had a tense conversation with her (presumably drunk?) mother and told Emily (Shay Mitchell) that she was going home. Emily quickly pointed out all of the reasons that wouldn’t be a good idea and took Sara to see Caleb (Tyler Blackburn) for advice about legal emancipation, something he had already been through. Caleb gave Sara a grilling and also a job to help her with her documentation. After filing the paperwork, Sara celebrated her impending freedom by getting a tattoo of a bird flying out of its cage. She convinced Emily to get a Chinese symbol that meant ‘courage’ tattooed on her midriff despite a few limp protestations. As Emily was having her tattoo done, Aria’s text came through and Sara got spooked. When they were finished Sara confronted Emily who tried to explain that they were protecting her. She tried to do a runner but Emily caught up with her and the two girls fled together when they thought ‘A’ was nearby.

Alison (Sasha Pieterse) decided that the best way to deal with her situation was to stay at home. She was upset after she heard a police officer making fun of her and turned down Kenneth’s (Jim Abele) offer to go to work with him to get out of the house. Instead Ali used her home time to get closer to Lorenzo (Travis Winfrey), which went down like a lead balloon with her father especially when he arrived home to find them kissing on the porch. After receiving a text from Hanna asking her to come over, Ali was told by Kenneth she couldn’t leave the house and he threatened to move her away from Rosewood. Ali retorted by asking if he was going to bury her in Aunt Carol’s garden like Charles before leaving her father speechless and heading out.

Spencer and Hanna arranged to meet Mona at Radley to do some investigation and see if they could find anything more about Charles. Mona was nowhere to be found and Spencer freaked out when she saw a poster featuring the girl from her nightmare and found the room she’d dreamed of. The girls searched the room and Hanna was spooked when she thought she’d found a body only to realise it was a CPR doll. They worked their way through some boxes and found confirmation that Charles’ organs had been donated seemingly giving further credence to the assertion that he is dead.

After hearing noises, the girls went to leave Radley and were startled to find Mona who was clutching a file. Spencer snatched the file from Mona’s hands and they discovered that it was a file on Lesli who had been in Radley too. Turns out Mona knew Lesli through their time together at Radley.

Putting the pieces together

Aria, Emily, Spencer and Hanna grouped at Hanna’s house where they looked at the photo of ‘A’ and discussed the file on Lesli. They found out that Lesli was the room-mate of Bethany Young and that she had been in Radley at the same time as Charles. Convinced that Lesli is ‘A’ the girls decided to try and catch her in the act. What they didn’t know is that Mona had called Lesli to tell them that the girls had her file and knew she’d been at Radley. Lesli got aggressive with Mona and voiced her anger that her friend hadn’t followed through with her promise to protect her.

Pretty Little Liars continues Tuesday 14th July 2015 on ABC Family in the US and Wednesday 15th July 2015 on Netflix in the UK. Watch the promo for the next episode No Stone Unturned below: