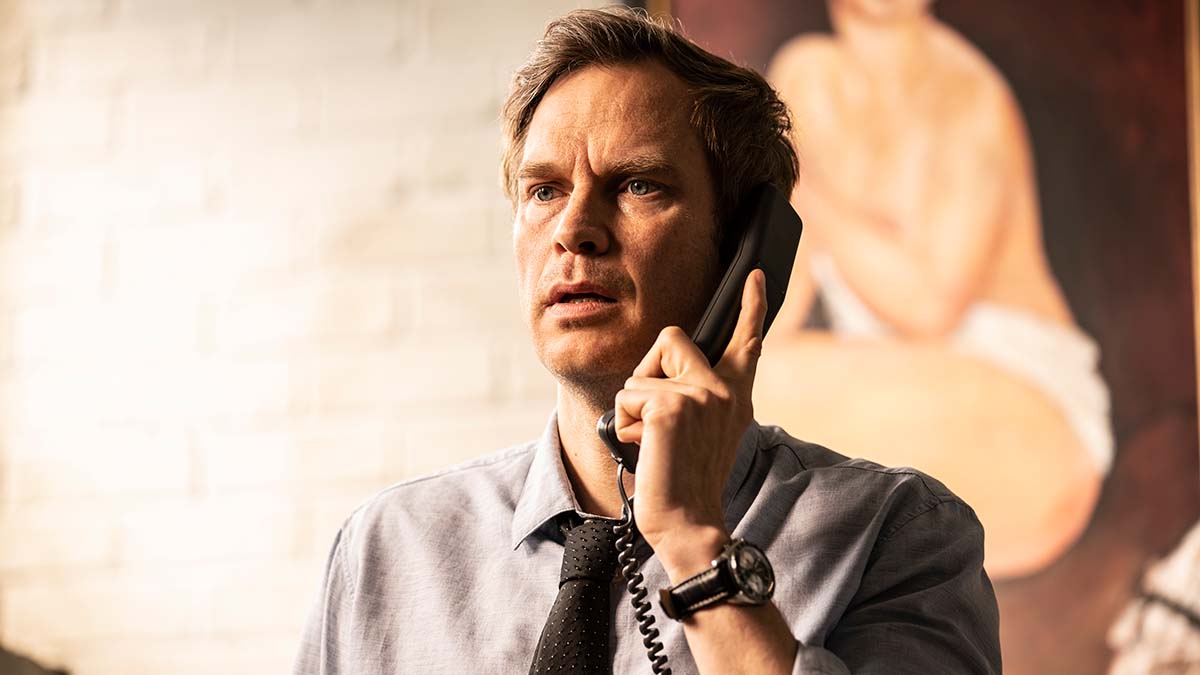 With the nights getting colder, you’ll no doubt be on the lookout for a gripping new crime thriller to get you through December.

Next week ‘Ragdoll‘, based on the best-selling book by Daniel Cole, arrives on Alibi in the UK. Starring Lucy Hale, Henry Lloyd-Hughes, Thalissa Teixeira, Michael Smiley and Ali Cook, the series is a gripping dark psychological thriller told over six parts.

Ahead of the show arriving in the UK I spoke to Ali Cook, who plays DCI Terrence Simmons, to find out what viewers can expect, discuss the show’s gruesome content and to find out what it was like to work with ‘Pretty Little Liars’ star Lucy Hale…

‘Ragdoll’ is based on the book by Daniel Cole. What can people expect going into the series?

It’s made by Sid Gentle, who famously made ‘Killing Eve’ and I think what they’re very good at is mixing genres. They’ve taken a very dark thriller and they actually hired a very famous comedy writer from ‘Killing Eve’, a guy called Freddy Syborn, who works a lot with Jack Whitehall, and they basically added a lot of dark humor and a little bit of social commentary to what is otherwise basically a very dark thriller.

I noticed there is a fair amount of comedy in there and given who is behind it, it’s something I probably should have expected…

I think it makes it quite unique. I think it’s one of those things where it’ll take people a little bit of time to understand that, once it beds in after the first couple of episodes. It’s not like a ‘True Detective’ or something, there are loads of little jokes hidden around. One of my favorite jokes was when someone said, ‘how bad is the body?’ and he says, ‘Oh, they’re going to be making a podcast about this one’. There’s just loads of really clever (jokes) and they’re very under the radar. Because it’s not a sitcom they’re just said very matter of factly. There’s loads of great little lines like that.

Your character is DCI Terrence Simmons. Where does he fit into the picture?

I love the name Terrence by the way (laughs), it’s perfect! He’s the ultimate in middle management and he is the boss detective. He’s in charge of the three leads, played by Thalissa (Teixeira), Lucy (Hale) and Henry (Lloyd-Hughes) and one other detective played by Michael Smiley. They’re the team of four and I’m their boss, but I’m the worst boss in the world. I’ve got no management ability. I’m much worse than them but I’m desperate for a result. In many ways, I’m a little bit of a comedic relief to the darker drama that’s going on.

Yeah. It’s a bit of a heightened series because he knows that the lead detective has got deep psychological problems. He feels that the way to control that is by basically micro managing the team but of course that doesn’t really work. They just go and do what they want anyway.

This show is quite gruesome and visually there’s a lot to take in. What’s it like to film those kinds of scenes because it looks very realistic when you’re watching it so does it feel realistic to you?

Yes and no, because these weird things happen. One of the things people don’t always understand unless they’ve been on a set is you only obviously shoot the scenes you’re in. I had never seen the Ragdoll body until one day, we were doing another scene where they had a huge photo of it and it scared the hell out of me. Kudos to the prop makers. It looks absolutely terrifying. One of the scenes that I did do is where somebody, and I’m not going to say who, spontaneously combusts into flames in a very sort of theatrical death. When we were filming that, that was really terrifying but then the next day, the body double, the charred body, was just sat in the kitchen where everyone got their coffee in the morning (laughs). It was this weird, very uncomfortable feeling. On the first day it was terrifying and the next day I’m just chatting away having an apple and there’s this charred body next to me. (It’s a) very weird set of feelings.

When you’re making a show that’s as dark and psychological as this one, is it hard to switch off once you leave set?

I can switch off once I’ve finished filming the scenes as it were but the pace is relentless. As soon as you’ve finished two or three scenes one day, you’re literally trying to really learn the lines for the next three days ahead. You’re usually up at five or six in the morning. It’s a real endurance game so you don’t really let up at all. I didn’t see anyone for three months, except for a little bit on the weekend but on the weekend I’m learning the stuff for the next week. You don’t get much of a break at all.

Were you familiar with Daniel Cole’s book before you got the part?

I wasn’t because I tend to read more psychology books than thrillers. I tend to read a lot of non-fiction. I auditioned for the role and when when I landed the role, the first thing I did was I ordered the book but then I had that thought of, ‘oh god, I actually don’t want to know who the killer is going in’. There’s always that danger as an actor that if you know too much you could always give a slightly informed performance when certain clues are given away. I started to read the book but I actually stopped on purpose. It’s the first time I’ve done a crime thriller. You’ve got to piece together what Terrence Simmons knows versus what you know, and the more that they can be aligned, the easier it is to act, I think.

This show really does demand your attention and there’s a lot going on in those first two episodes with split narratives. Does that get a little easier for the viewer the further we get into the series?

Yes, I think so. In the first episode, they really establish that Mark Rose, the lead detective, has got deep psychological issues because he convicted the Cremation Killer who got let off because Mark Rose had fudged some evidence. Since then, he’s had a lot of troubles. That very first episode is very trippy but I think once that’s established, when it goes into episode two, it’s much more about who are these six dead people and how do we catch the killer?

The cast for this show is incredible and Lucy Hale, who is best-known for ‘Pretty Little Liars’ is part of it. What was she like to work with?

Lucy for me was like proper showbiz. I’ve never really met anyone quite like Lucy, but I absolutely loved her. She’s an absolute sweetheart. Super humble and super talented. But the thing that terrified me is, like proper LA, she was always doing yoga at five in the morning before she arrived, and she always ate super healthily, and she was always getting facials done. Midway through, I was like, ‘I’m going to get a facial’ (laughs) and I suddenly thought, ‘I need to stop eating all these Ginsters and actually start looking after myself a little bit’ (laughs).

It is, it’s true. I didn’t really know Lucy because I wouldn’t watch a show like (‘Pretty Little Liars’). That show was aimed at teenage girls so I’d never really seen it because it’s not the sort of thing I watch. They’re really in for a shock. Everyone knows her and they love her to bits. I think this is a really brave choice for her because there’s a lot of irony with her character as well that’s very subtle and very, very clever. You’ll find out in the later episodes that there’s a lot going on with Lucy’s character.

What do you have coming up after ‘Ragdoll’?

(‘Ragdoll’) was a great project to be working on. We came out of lockdown and then I went straight into it. One of my hobbies is the history of magic and I made a short film a couple of years ago about Welsh folklore. I’ve written a feature film called ‘The Grimoire’, which is based on the history of magic in Britain. We’re actually producing that film at the moment and that’s the thing that I’m doing in the background whilst doing other acting jobs as and when they come up.

I’m right in thinking that you are a magician as well as an actor?

I am, yes. There’s an old phrase in magic, which is a magician is an actor playing the part of the magician. That’s a very famous phrase. They always say that to beginning magicians because they say you need to learn to be able to act before you can really be a magician, which is what I did. I did loads of acting classes. Originally I did TV magic shows for many years throughout my 20s on Channel Four and Sky and stuff. It was actually my producer, he used to own Objective Productions, a guy called Andrew O’Connor, he famously invented ‘Peep Show’ the sitcom. He told me, ‘with your look and things you should do acting as well’. I started branching out over into drama. It was quite a leap, but also surprisingly similar. You’re always holding some prop and you have to say exactly the same line in the same way at the same time. There’s a lot of crossover.

When Freddy, the writer, found out that I did magic as well he wrote that Terrence Simmons does a trick in one of the episodes (laughs) so they’ve managed to wangle that in as well, which I thought was quite cool. Freddy being such a clever writer, the trick that I do actually mirrors the plot. If you’re aware of what’s going on, it kind of explains what’s going on with the killer. It’s a very, very clever, subtle little metaphor that he placed in there.