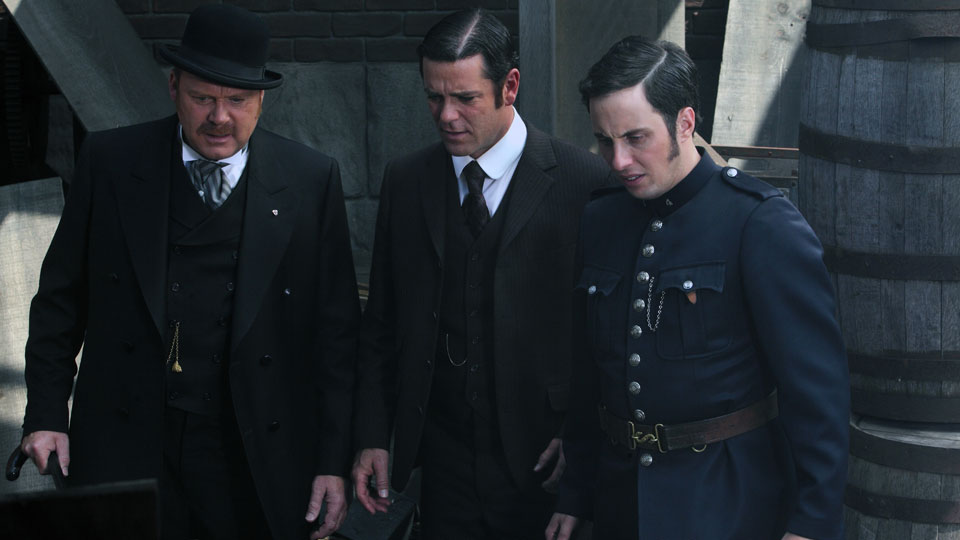 Murdoch Mysteries returns to Alibi on 4th February for a sixth series.

The one-hour drama, based on Maureen Jennings’ books, follows Detective William Murdoch (Yannick Bisson) as he tries to solve murder cases in the late 1890s and early 1900s. Set in Toronto, the show takes place in the age of invention with Murdoch using new forensic tenchiques like fingerprintings and ultraviolet light to piece together clues.

In the season opener, Detective Murdoch witnesses firsthand the early days of mechanical airplane flight as he delves into a high-flying, high-level conspiracy.

Later in the season, as well as facing new challenges in his relationship with Dr. Julia Ogden (Hélène Joy), he will try to clear the name of a young Winston Churchill (Thomas Howes; Downton Abbey) after his visit to Toronto goes awry; work to stop a dangerous madman from unleashing a deadly toxic gas attack; visit a community of naturists; and encounter a ghostly presence in Queen’s Park. Sir Arthur Conan Doyle also makes an appearance when his supposedly fictional creation, Detective Sherlock Holmes, becomes entangled in a violent robbery.

The trailer for the new series was recently released and you can watch it below:

Preview the new season with our gallery and don’t forget to tune in when the show returns on 4th February at 9pm on Alibi.

Pip Ellwood-Hughes
Pip is the Editor of Entertainment Focus and the Managing Director of agency Piñata Media.
Previous article
Dallas is back tomorrow night
Next article
Rylan as Xtra Factor host?

‘Ragdoll’: get your first-look at Lucy Hale in UKTV’s Alibi Original series

The Glades returns to Alibi