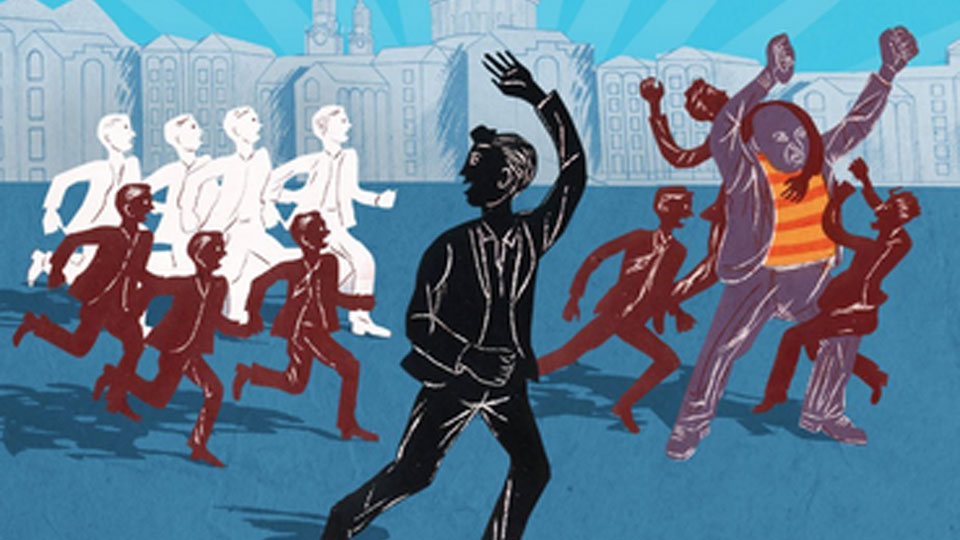 Hue and Cry is a delightful Boys Own-style adventure from the Ealing Studios. In a recently war-torn London – extensive location fiming in this 1947 picture shows the bombed out-buildings surrounding Battersea Power Station and Holborn – a feel-good movie with plenty of innocent escapism harking back to more innocent times was just the ticket for the war-jaded populace, hence the contemporary success of the movie. Like The Magnet, the other Ealing comedy released recently, Hue and Cry is a good-natured celebration of boyhood.

Yet Hue and Cry still stands up well today, because it is a beautifully put-together movie with some great performances, as well as attaining classic status thanks to its age and the bygone era of which it is a product.

A young Harry Fowler (perhaps best-remembered for The Army Game, after which he enjoyed a solid and busy career, usually playing chirpy milkmen or similar, up until his death in 2012) plays to his strength as the happy-go-lucky working class Joe, a boy too old for comic books who nevertheless becomes engrossed in one particular title (amusingly called The Trump) that appears to contain secret codes for the attention of a criminal gang. Taking a break from playing in the massive adventure playground of the capital’s bombed-out ruins, the boys track down the writer of the comic book (cue a brilliant comic turn from Alastair Sim) and, with the police disinterested in their theory, set about cracking the code and bringing the criminal gang to justice themselves.

The plot is straightforward and fairly well-trodden, being as it is the staple of children’s adventure writing – yet there’s plenty of flair in the making of Hue and Cry that sets it above the average and makes for a highly entertaining yarn. A lot of credit is down to Charles Crichton’s imaginitive direction, which is palpable from the opening credits sequence, in which the cast and crew’s names are scrawled onto a wall against which the unruly boys throw stones.

Performance-wise, Harry Fowler is very personable and a fine young talent as Joe, the leader of the gang of boys, though his subordinates tend to be underwritten. Jack Warner (who was soon to be the much-loved cosy policeman in Dixon of Dock Green) plays against type as a scheming crook, whilst Alastair Sim steals every scene he’s in with an enjoyably over-the-top performance very typical of his distinctive output.

Hue and Cry is now more likely to appeal to aficionados of British cinema rather than the younger audience that would have been in mind when it was made. A consequence of its target audience is that Hue and Cry isn’t quite as layered and cleverly subtle as many of the Ealing comedies that followed. Nevertheless, there’s a lot to enjoy, and this restoration offers a clean and crisp sound and picture quality. It remains a loving evocation of British art in the immediate aftermath of war.

Extras on the disc include an introduction by Steve Chibnall, in which he assesses the context of the movie over an informative ten minutes. Fellow film historian Richard Dacre presents a second feature, which documents the locations used in the filming of the movie. Dacre visits the locations as they are now, and this is interspersed with footage from the same place in the movie – a fascinating look at how London has been rebuilt since the war.