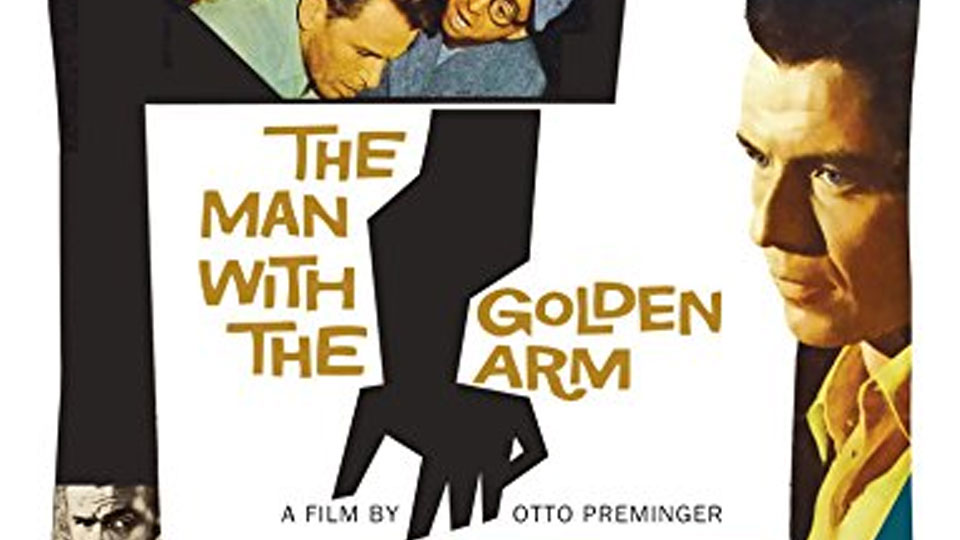 Frank Sinatra gives one of his signature performances as Frankie Machine, a heroin-addicted drummer who, despite his initially positive outlook, finds adjusting to life outside of prison impossible without falling back on old habits of gambling and drugs. Forty years before Trainspotting, Hollywood depicted both the use of heroin and its devastating consequences in The Man With the Golden Arm.

The movie is a moody slice of quality 1950s Hollywood, shot in black and white with a memorable jazz suite score by Elmer Bernstein, where the studio sets double for a run-down American city decaying as much as Sinatra’s Machine.

Having to look after a crippled wife (played by Eleanor Parker) and the guilt that she was paralysed as the result of his actions, Frankie Machine decides to kill the monkey on his back (his addiction) once and for all, and he registers as a musician and finds himself an audition. But staying on the straight and narrow for long enough to ensure he can turn his life around is the biggest challenge he’s ever faced. The movie also stars a glamorous young Kim Novak as Molly, a neighbour Frank has an affair with, yet she has the compassion to look out for him and try to help him clean up his act.

The Man With the Golden Arm is a stark portrayal of desperation and self-destruction. We root for Frankie Machine, yet he is his own worst enemy. It’s a great story, and Sinatra’s compelling lead performance makes for a powerful movie. The astonishingly candid depiction of drug use – there are several scenes of heroin being injected, and another of the effects of cold turkey – give the film a modern feel, and Frankie’s struggles are probably more relevant now to the West even than when the film was made. A Hollywood touch is to provide a muted ‘up’ ending that European film noir of the same era wouldn’t have done – but what’s new?

It has to be said that it’s a slow-burner, taking two hours to tell the story. The first half hour of the picture takes its time as Frankie meanders around his old haunts, re-establishing contact with the loveable but dim Sparrow (Arnold Stang) as well as the disreputable Louie (Darren McGavin), who wants to encourage Frankie back into the dark worlds of gambling and heroin. This is reflected in Otto Preminger’s direction, which uses long scenes, still camera work and very few cuts. The second half of the movie picks up in pace, and Preminger’s direction and the editing become more thrilling as Frankie’s life spirals out of control.

This re-release sees the picture in a crisp new transfer in original full-screen aspect ratio. Deliberately shot to look dark to enhance the noir-ish feel, the picture quality reflects a graininess that results from low lighting. A downside is the comparatively poor sound quality, which requires a high volume to render the dialogue audible, and even then it remains muffled in places. There’s also, besides a promotional materials gallery, only the movie to enjoy on the disc.

Overall, The Man With the Golden Arm is a remarkable film with an unforgettable central performance by Frank Sinatra as well as solid support from Kim Novak. The story remains engrossing, truthful and thoroughly entertaining. Recommended.