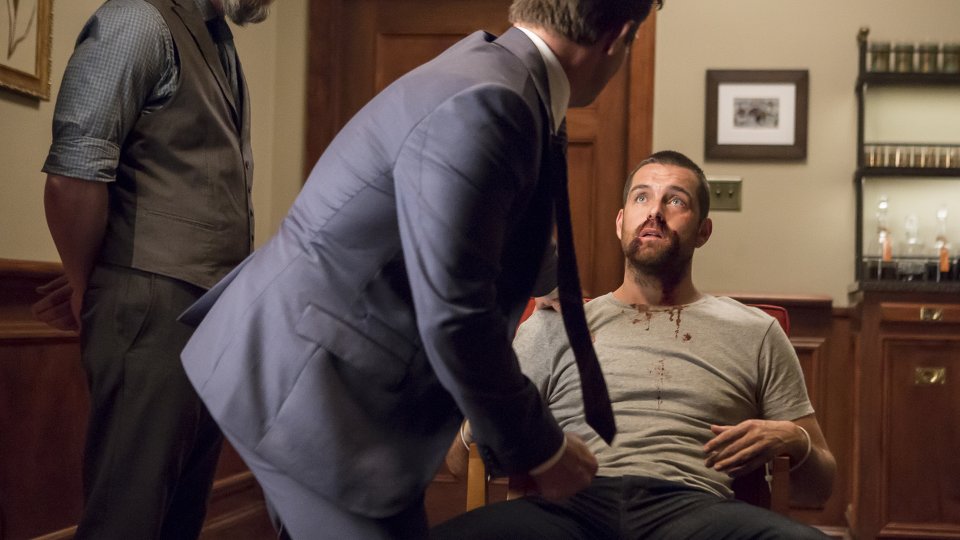 Tonight’s episode of Banshee served up a shock death and saw Hood’s (Antony Starr) past come back to haunt him.

If you haven’t seen the latest episode of Banshee and want to avoid spoilers we suggest you stop reading now. If you have seen it and want to relive all of the action then keep reading.

Special Agent Robert Phillips (Denis O’Hare) arrived on Hood’s doorstep wielding a gun and demanding answers about the disappearance of Agent Racine (Zeljko Ivanek). After arresting Hood, Phillips embarked on the journey to New York for questioning but called in at a gas station for a quick stop. Hood broke out of his handcuffs, knocked Phillips out but was then himself surprised by a taser.

A case of mistaken identity

It turned out that the real Hood’s son Jason (Harrison Thomas), who you’ll remember is dead, had robbed a rather obese gangster called Raymond Walton Brantley (Shuler Hensley). Believing Hood to be Jason’s actual father, Brantley demanded the whereabouts of Jason and his money back. Hood tried to escape but found he was in a moving lorry that had been kitted out as an office for the gangster.

Hood was tied to a chair and tortured with electrocution before telling Brantley that Jason was dead. In a bit of fiction though he said he killed him and promised to give Brantley the money if he took him back to town. Phillips was taken out of the van and into the woods to be ‘dealt with’. Hood meanwhile broke the arm of his chair, assaulted Brantley and forced the large man out of the trapdoor of his lorry and onto the road. The lorry ran right over him killing him and putting an end to that threat for Hood.

A fight to the death

Burton (Matthew Rauch) found himself in a fight for his life after Nola (Odette Annable) attacked him in broad daylight threatening to kill him, Proctor (Ulrich Thomsen) and Rebecca (Lili Simmons). After lodging a hatchet in his upper chest, Nola launched a violent and aggressive assault that was beautifully choreographed and also shockingly graphic. Despite landing the first blow, Nola didn’t come out of it with her life after Burton ripped her throat (and tongue) out and left her to die on the floor as he recovered from the assault.

Tommy Littlestone (Ricky Russert) ignored Chayton’s (Geno Segers) advice and launched a full scale attack on the Savoy strip club in a bid to assert his power and attack Proctor. Accompanied by several Redbones, Tommy went rogue and rocked up at the Savoy blasting guns and shooting up the place, and its patrons. What he hadn’t banked on was Brock (Matt Servitto) being there enjoying a private lap dance in the back of the club. As Tommy and his comrades destroyed the club, Brock called for back-up and unleashed a few rounds of his own until his Banshee police pals arrived on the scene. The most shocking thing about Tommy’s death? That it was Billy Raven (Chaske Spencer) who shot him meaning that his former Kinaho acquaintances will be out for revenge.

Hood wasn’t the only person in Banshee stealing identities this week. Job (Hoon Lee) and Sugar (Frankie Faison) worked together to stealing magnetic card IDs at Sterling Industries as part of their planned heist of the military base.

After almost returning to Banshee solo, Hood decided to rescue Phillips. He agrees to let him live if he drops the investigation against him but Phillips warned it may be too late as his file on Hood had already been dropped off at the police station. As Hood returned back to Siobhan’s (Trieste Kelly Dunn) trailer, he found his girlfriend watching the interrogation tape from the night of the diamond heist and discovered she’d read the file on him. What will she do with that information?

Banshee continues at 10pm Thursdays on Sky Atlantic HD. Watch the promo for the next episode Real Life is the Nightmare below: