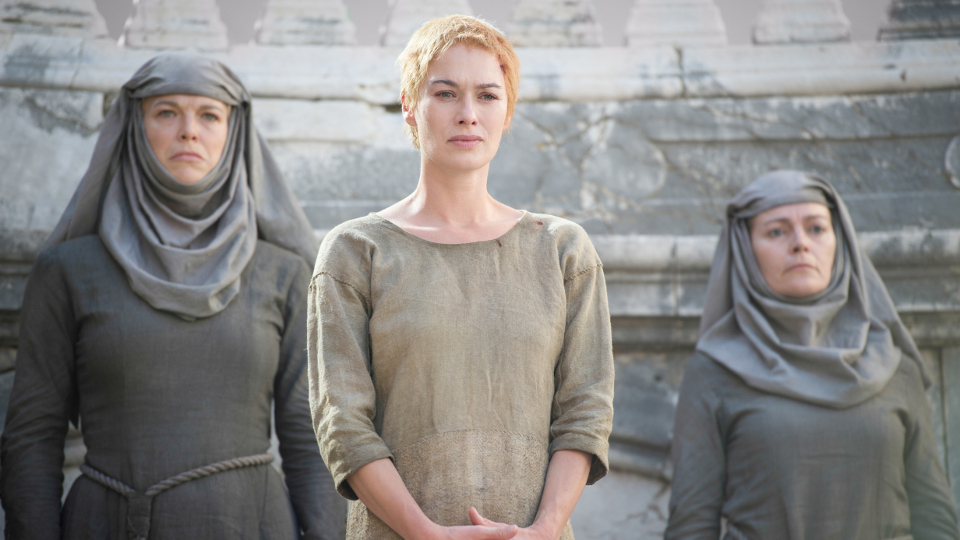 The tenth and final episode delivered pretty much everything we’ve come to expect of a Game of Thrones season finale. There was plenty of shocks, surprises and of course death.

If you haven’t seen the final episode yet of Game of Thrones season five and want to avoid spoilers then please stop reading now. If you are up-to-date and want to relive the action, or just don’t mind spoilers, then please keep on reading.

Mother’s Mercy was written by showrunners David Benioff & D. B. Weiss with David Nutter in the director’s chair for the second time this season.

Near Winterfell, after being convinced by Melisandre (Carice van Houten) that burning his daughter Shireen alive would guarantee a victory, Stannis Baratheon (Stephen Dillane) was preparing his army for battle with the Boltons. Melisandre notices that the ice and snow is melting and presumes this is because of the sacrifice and that the Lord of Light has answered her prayers.

It turns out that this isn’t the case and Stannis is about to have a rather terrible day indeed. First he learns that half his army have deserted in the night, with all of his horses. Then he discovers that his wife has hung herself after obviously realising that burning Shireen was a terrible idea. Melisandre then also runs off back to Castle Black leaving Stannis with little hope.

With nothing left to lose but his life Stannis remains stubborn and orders his men to march on Winterfell anyway. He hopes that maybe they’ll just surprise the Boltons and that things will be fine. Wrong again as they approach Winterfell the Boltons are already coming to meet them with a far bigger army all on horseback. Stannis and his army have no choice but to stay and fight to the death.

Meanwhile at Winterfell Sansa Stark (Sophie Turner) has used the corkscrew she stole to break out of her room. She marches to the broken tower and lights a candle to signal Brienne (Gwendoline Christie). Unfortunately she’s about three seconds too late and Brienne is distracted by Pod (Daniel Portman) who brings her news of Stannis. Brienne is out for his blood and goes to try and find him.

Ramsay’s (Iwan Rheon) men make short work of the Stannis army and instead of being treated to a bloody battle scene we jump ahead to the aftermath. It looks like everyone is dead or at least fatally wounded. Stannis is hurt and trying to limp away until he comes across two of the Bolton soldiers. They fight and he manages to kill them both but sustains a nasty wound to his leg.

Brienne turns up and finds Stannis propped against a tree. He’s not able to fight and she sentences him to death for killing Lord Renly. She seems surprised at Stannis but takes a swing at him. We presume she’s killed him but don’t actually see what happens. Maybe she changed her mind? We’ll have to wait until next season to find out.

Sansa see’s that Ramsay is victorious an heading back to Winterfell and looks ready to escape. She runs into Myranda (Charlotte Hope) and Reek/Theon (Alfie Allen). Myranda wants to lock her back up and threatens to hurt her. Before she has chance Theon finally fights back and knocks Myranda off the ramparts to her death. Their only way to escape is to jump from the castle walls which they do. We presume they’ve landed in some deep snow and survived but again we’ll have to wait until next season.

Aboard their ship there’s a lovely quiet moment as Jaime stumbles his way through trying to tell Myrcella that he’s her real dad. She tells him that she knows about him and Cersei (Lena Headey), that he’s her dad and that she’s glad to have him as her dad. What seems like a rare happy moment quickly turns horrific as Myrcella’s nose begins to bleed and it becomes apparent that she’s been poisoned.

Back on the dock at Dorne we see Ellaria Sand wiping off her poisoned lipstick. As her own nose starts to bleed she drinks the antidote. It’s unclear if Myrcella will survive.

In Braavos we see that the local brothel has found three young girls for pedophile Meryn Trant (Ian Beattie). He begins to hit the girls with a cane and seems to be enjoying their cries. However the final girl doesn’t make a sound. He decides he wants just her and sends the others away.

It turns out that the girl is Arya Stark (Maisie Williams) who is disguised by wearing the face of another. After punching the girl in the stomach Arya reveals her identity and leaps forward stabbing him in the eye. She then does the same to his other eye, forces a rag into his mouth to stifle his screams and continues stabbing his chest. Before slitting his throat she makes sure he knows who she is.

Back at the House of Black and White Arya is confronted by Jaqen (Tom Wlaschiha) who knows she has killed. He says a wrong death must be punished with a life and it looks like he is going to make Arya drink the lethal water. Instead he drinks it himself and collapses dead.

Arya runs to him screaming and then he appears behind her very much alive. The body is wearing many faces and Arya removes each until the last is her own. Suddenly she cries out and it appears that she has been blinded as punishment for her actions. It’s unclear if this is permanent or not.

In the throne room in Meereen Tyrion (Peter Dinklage), Daario (Michiel Huisman) and Jorah (Iain Glenn) are sat moping about. Dany hasn’t returned after flying away on the back of Drogon and they have no idea where she is. After a little debate it’s decided that Daario and Jorah will head north to try and find her. They leave Grey Worm (Jacob Anderson) in charge with Missandei (Nathalie Emmanuel), Tyrion and Varys (Conleth Hill) to run the city.

Dany is shown to be alive with Drogon. Unfortunately Drogon is injured and can’t be bothered to take her back to Meereen. She looks a mess and decides to go for a walk. After a short while she spots a couple of riders on horseback. Suddenly the whole landscape is full of them and they approach Dany before circling her. There’s no conversation but it looks like it’s the Dothraki and we’ve no idea if she’s in danger or not.

Still locked up Cersei finally decides to confess her sins to the High Sparrow (Jonathon Pryce). However she only confesses to sleeping with Lancel. She doesn’t own up to her relationship with brother Jaime for fear for her children.

High Sparrow tells her that she will be put on trial but agrees that she can be set free. First though she needs to face her atonement. She is roughly scrubbed clean, her long hair is hacked off and then she is forced to walk through the streets of King’s Landing naked.

She is guarded from the people by the Sparrows. As she walks along she is cursed and shouted at while people throw rotten food and excrement at her. It’s a long and very uncomfortable scene that leaves her understandably distraught and broken.

When she arrives back at the Red Keep she is met by Qyburn. He covers her up and then introduces her to the newest member of the King’s Guard. The new member is huge and apparently sworn to silence until he has destroyed her enemies.

Behind the guard’s helment we can see red eyes and strange grey skin. It looks like Qyburn has finished his experiments and this is the Mountain. For once we’re rooting for Cersei and the anger in her eyes makes us think she’ll definitely be back for blood.

At Castle Black Lord Commander Jon Snow (Kit Harrington) chats with Sam (John Bradley-West) about how hated he is. Sam lets on that he’s no longer a virgin and requests that Jon let him leave with Gilly and the baby. He plans to train to be a Maester in the hope of becoming more useful and Jon eventually reluctantly agrees.

After Sam has left the young boy Olly (Brenock O’Connor) bursts in and tells Jon that one of the Wildlings has news of his Uncle Benjen. Jon rushes outside with Olly and finds a sign that reads ‘Traitor’. As he turns around he is confronted and stabbed by Ser Alliser Thorne (Owen Teale).

Jon can’t believe it and before he has chance to fight back more of the brothers step forward to do the same. As the life slips away from Jon young Olly steps forward and it’s heartbreaking to watch him stab Jon as well.

The episode and season ends with Jon lying on the ground bleeding out. Jon is also presumed dead which is perhaps the biggest shock for fans. However we do wonder if there’s anything that Melisandre might be able to do to save him?

It’s a strong finish to the season and has left plenty of questions for us to debate over while we wait for next season.

Let us know your thoughts on Mother’s Mercy in the comments below as well as your hopes for next season.

Game of Thrones will return in 2016 for season six on HBO in the US and Sky Atlantic in the UK.