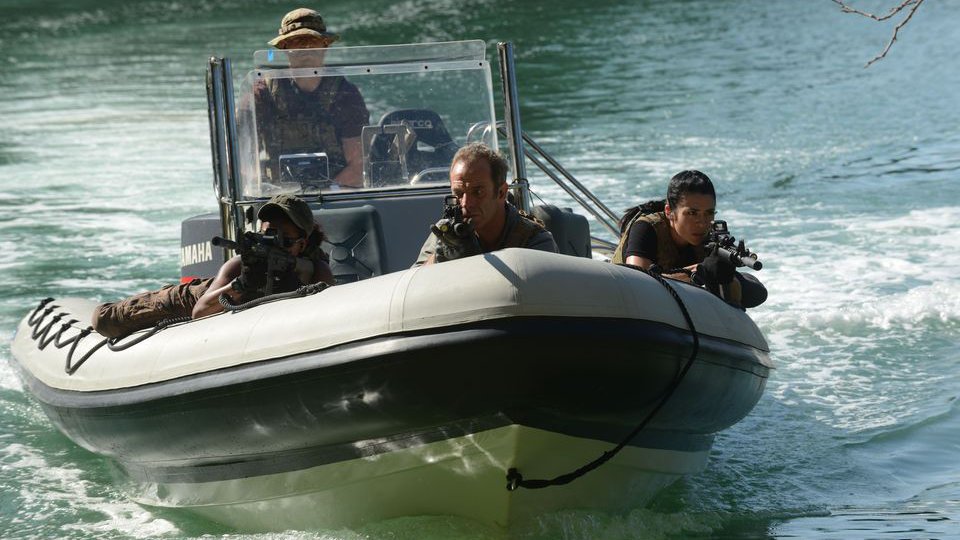 The second episode of Strike Back: Legacy continued the strong start to season five.

The episode picked up right where the first left us with the aftermath of the British Embassy bombing. The Embassy was decimated and the North Korean diplomats are dead. Robin Foster (Tim McInnerny) survived but suffered injuries needing immediate medical attention. Locke (Robson Green) also survived but came away almost unscathed.

Section 20 regrouped at the safehouse of the friend of Stonebridge (Philip Winchester). Meanwhile Scott (Sullivan Stapleton) and Stonebridge tried to make it through gang land with McQueen (Max Beesley) as their prisoner. They were attempting to get back to Section 20 to interrogate McQueen about events at the Embassy. Just when it looked like they might escape the police turned up and forced them at gunpoint to hand McQueen over.

It quickly became clear that the police are corrupt and taking orders from the same bad guys as McQueen was. They order the police to kill McQueen but they decided to take him somewhere more private to do so.

Scott and Locke pursued the police convoy in a Tuk Tuk which led to much hilarity. Eventually they all arrived at a construction site and it looked like curtains for McQueen.

Before they could execute him Locke hatched a plan and stole a digger with Scott riding shotgun. They attacked the police and managed to escape with McQueen.

McQueen offered to tell them what they wanted about those in charge as long as his family received protection. Section 20 agreed and sent Richmond and Martinez to go and rescue them.

At McQueen’s house they found his pregnant wife hiding and she was reluctant to go with them. They also had to fight off the police who were hoping to capture her instead. Richmond had the opportunity to show off her brutal hand-to-hand combat skills.

After reuniting McQueen with his wife he gave up information on those he was working for. Turns out it was the the North Koreans and their secret crime syndicate Office 39 who blew up their own diplomats in order to try and start a war. He told them where they are based and Locke sent Scott and Stonebridge to recover intel.

Arriving at the location they discovered a heavily guarded high-rise building. They decided the easiest way with least resistance would be to scale the outside of the building and did so carefully. Near the top they entered the building and cleared their way to the top floor where they found what they were looking for.

The enemy were alerted and they had to retreat to the roof until they found themselves surrounded. Rather than give themselves up they went for the do-or-die option, threw grenades at the enemy and base jumped off the building. As everything exploded above they opened their parachutes and floated off to safety.

Meanwhile Section 20 were attacked by the corrupt police and had to try and escape while fighting them off. McQueen gave his life and took out the police captain to stall them and ensured his wife and baby were safe.

At the hospital it looked like Robin Foster was pulling through and his wife Mei (Michelle Yeoh) was at his side. Instead she reveals to him that she has been leading a double life and never loved him. Turns out she’s an undercover agent for Office 39 and after revealing her secret she injected him with poison which kills him. To keep her identity secret she screamed for help and everyone nearby came running and the episode ended.

The official synopsis for Episode 3 reads:

[quote]As Locke realises his long-time friend is working with the dangerous Yakuza and Office 39, Scott must protect his son when they come under enemy fire.[/quote]

Episode 3 looks to be rather exciting with more over-the-top action. It will be interesting to see the meeting between Scott and his son and we wonder if there will be fireworks and also if he’ll be a little more responsible than normal? Richmond and Martinez look like they are going to be back in action. Locke vs Mei Foster is looking likely which should turn into a thrilling battle. We also expect to see the Scott and Stonebridge bromance continue as they find themselves outnumbered against the Yakuza and the mysterious North Korean Office 39.

Preview Strike Back: Legacy – Episode 3 with our gallery below:

Strike Back: Legacy continues with Episode 3 on Wednesday June 17th at 9pm on Sky 1 and will air in the US on July 31st on Cinemax.