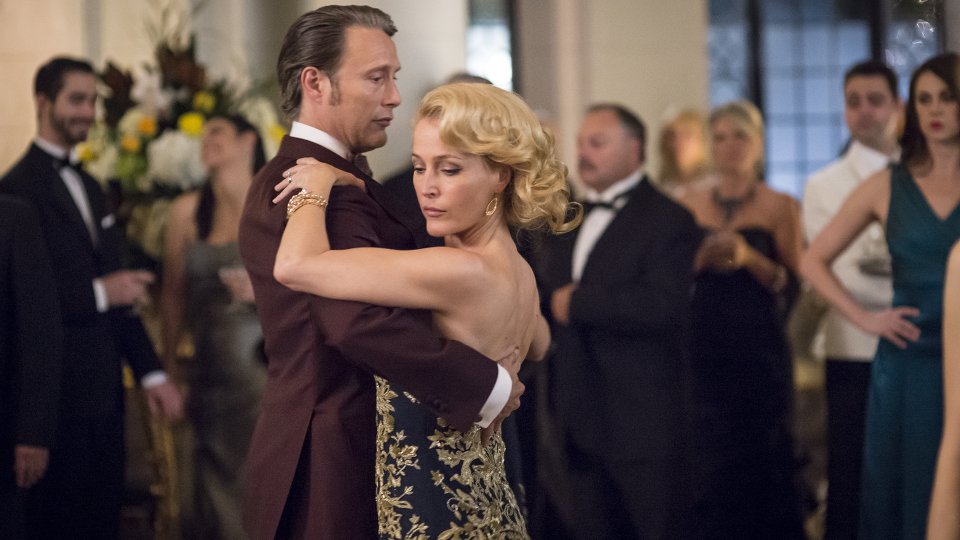 Hannibal returned to the UK tonight for the start of its third season and it played its cards very close to its chest.

If you haven’t seen the latest episode of Hannibal and don’t want any spoilers we suggest you stop reading now. If you have seen it and want to relive all of the action then keep reading.

A taste of Europe

Tonight’s episode opened with Hannibal riding a motorcycle through Paris. We soon learn that he has his sights set on Professsor Roman Fell (Jeremy Crutchley) but before he gets down to business he met and flirted with Fell’s former assistant Anthony Dimmond (Tom Wisdom) and of course gave out a fake name. Following the party, Hannibal sees Roman leaving and says hello. He then stalks his prey back to his house where he arrives first leaving Roman seriously freaked out. Well he should be, as Hannibal then promptly kills him and is caught eating his kill by the good Professor’s wife when she arrives home.

The episode started to unravel the reasons behind Bedelia’s (Gillian Anderson) decision to accompany Hannibal on his European adventure. Through flashbacks we saw the aftermath of the moment where Bedelia killed a patient who attacked her (she also put her arm down his throat – nice!) and Hannibal was present ready and willing to manipulate her. Move forward to the season 2 finale and we saw Bedelia catching (a very buff) Hannibal enjoying a shower in her house after the bloody fight with Will (Hugh Dancy) that ended the last season. Bedelia was wielding a gun but Hannibal talked her down and she shared the belief that he wouldn’t kill her.

Fast forward some time later and Hannibal is referring to Bedelia as his wife with the two now living in Florence. Bedelia appears to be fighting the instinct to run and it’s unclear at this point if she’s merely surviving or a willing accomplice to Hannibal’s dastardly deeds. She’s pretty alarmed when Hannibal brings his new friend Anthony home for dinner, whom he bumped into whilst in his new teaching job pretending to be Professor Fell, and she struggled to eat her dinner seemingly in fear that Hannibal is going to kill their dinner guest. Anthony had other ideas thinking he’d been invited for a kinky threesome but both Bedelia and Hannibal confirmed it wasn’t that kind of evening. Bedelia was relieved when Anthony left unscathed.

Days after their (very) tense dinner Hannibal gave a lecture on Dante as part of his new job with Bedelia in attendance. Anthony turned up and realised that his new friend wasn’t whom he thought he was but didn’t seem to care as he disliked Professor Fell anyway. By the end of Hannibal’s lecture, Bedelia had gone and it seemed like she was finally going to make a run for it. We also learned in the episode that she had a routine of going to same butchers/cheese shop to buy the same things over and over again.

As Bedelia was about to head out of her door, Hannibal arrived home with Anthony and he murdered him as Bedelia looked on in horror. Covered in blood and distressed, Bedelia struggled to decide what her part in the situation was as Hannibal probed her asking if she was observing or participating. She eventually admitted she had thought about Anthony’s death and that it had played out exactly as she’d expected.

Reverting back to his show-off ways, Hannibal displayed Anthony’s torso in the same place as he’d given his lecture on Dante.

Anyone expecting to find out what happened to Will and co was sorely disappointed as none of the main characters, other than Hannibal and Bedelia, appeared in the season opener. Someone who did appear though, albeit in flashbacks, was Abel Gideon (Eddie Izzard). In the episode’s most vomit inducing scenes, Hannibal and Abel dined together eating Abel’s amputated leg. The scenes served to dissect Hannibal’s methods when it comes to his cannibalism and they definitely left a sick taste in our mouths.