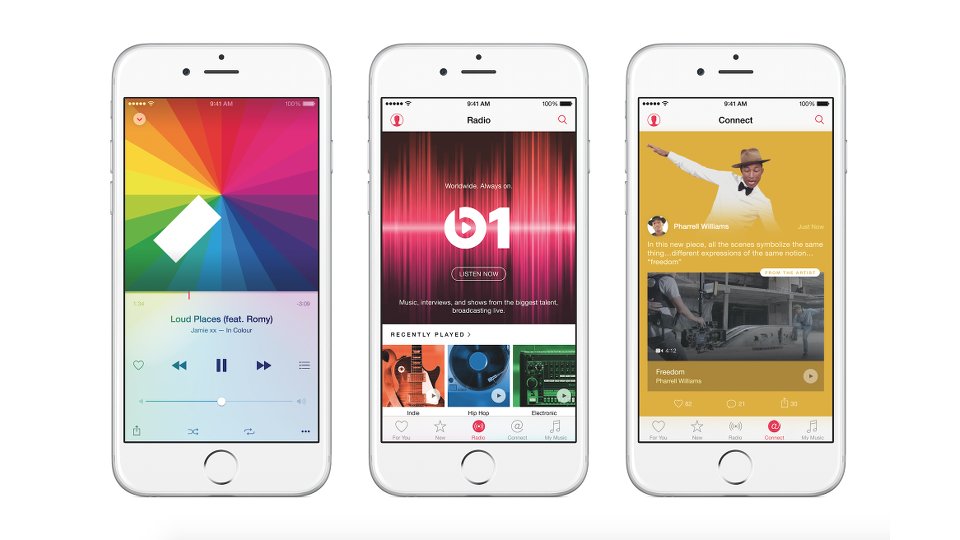 Launching as a competitor to Spotify and the recently launched Tidal, Apple Music is aiming to offer unparalleled choice along with some rather cool added extras such as 24 hour live radio station Beats 1 and Apple Music Connect, which brings artists and fans closer together.

Ahead of the service’s launch at the end of the month, we’ve put together a guide with everything you need to know.

What is Apple Music?

Apple are calling Apple Music ‘a revolutionary streaming service and app that puts the entire Apple Music catalogue at your fingertips across your favourite devices’. The service offers over 30 million songs to stream and for the first time the music in your library co-exists with all of the music on offer in the iTunes Store.

One of the things that sets the service apart from its already established rivals is curated playlists. Apple has collaborated with music experts from around the world to craft playlists based on your preferences. The more you listen, the better the curators become as they grow accustomed to your tastes. The “For You” section of Apple Music provides a fresh mix of albums, new releases and playlists, which have been personalised just for you.

Siri will also be able to help you enjoy all of the music on offer with users being able to request songs from specific years, specific artists or by the user asking more broad questions such as ‘What was the number one song in February 2011?’

What else does Apple Music offer?

Apple Music is already sounding like a very attractive service but there’s more! Subscribers will get access to Beats 1, Apple’s first ever live radio station that will broadcast in over 100 countries. The 24 hour station is led by Zane Lowe in Los Angeles, Ebro Darden in New York and Julie Adenuga in London. Wherever you are in the world, you’ll hear the same thing and Beats 1 will offer exclusive interviews, guest hosts and the best of what’s going on in the world of music.

Apple Music Radio gives you stations created by some of the world’s finest radio DJs. The new stations range in genres from indie rock to classical and folk to funk, with each one expertly curated. With membership, you can skip as many songs as you like, so you can change the tune without changing the dial.

What is Apple Music Connect?

Another exciting aspect of Apple Music is that it gives artists and fans a way to connect with one another. Through Connect artists can share lyrics, backstage photos, videos or even release their latest song directly to fans directly from their iPhone. Fans can comment on or like anything an artist has posted, and share it via Messages, Facebook, Twitter and email. And when you comment, the artist can respond directly to you.

How can I listen to Apple Music?

The service will be available to use on iPhone, iPad, iPod touch, Mac, PC, Apple TV and Android phones.

When does it launch?

Apple Music is due to launch on 30th June in 100 countries so eager fans only have a few more weeks to wait.

How much does it cost?

At the time of writing the UK price for the service hasn’t been announced but in the US users can either take out a $9.99/month subscription or a family plan providing service for up to six family members available for just $14.99/month. To entice users to give the service a go, all new sign-ups can enjoy 3 months free membership where they can opt out of a monthly subscription any time before the end of that trial period.

Advertisement. Scroll to continue reading.
In this article:Apple, Apple Music