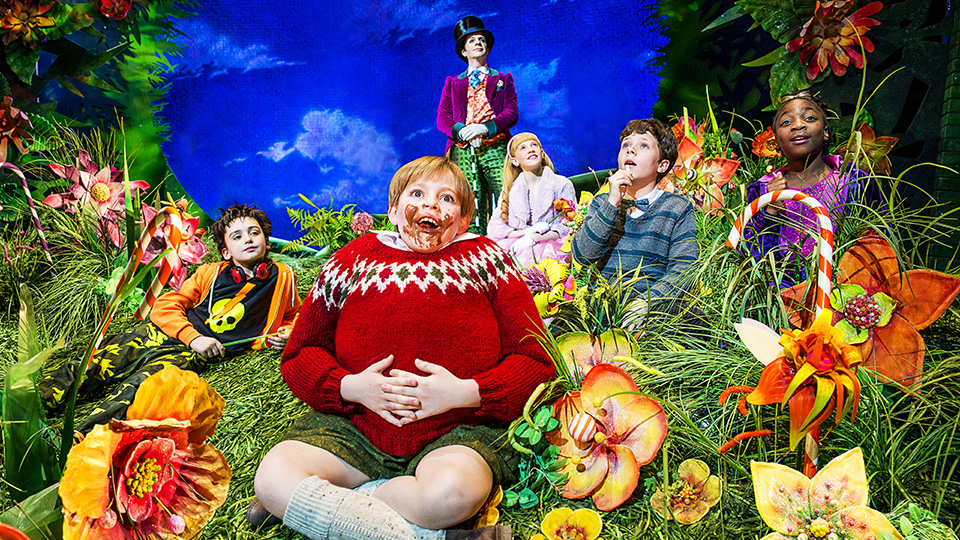 A new set of images have been released featuring the new cast of Charlie and the Chocolate Factory the Musical.

The shots show keys moments from the gloriously colourful musical featuring Jonathan Slinger as Willy Wonka alongside the rest of the cast.

When Charlie wins a golden ticket to the weird and wonderful Wonka Chocolate Factory, it’s the chance of a lifetime to feast on the sweets he’s always dreamed of. But beyond the gates astonishment awaits, as down the sugary corridors and amongst the incredible edible delights, the five lucky winners discover not everything is as sweet as it seems.

Featuring ingenious stagecraft, the wonder of the original story that has captivated the world for almost 50 years is brought to life with music by Marc Shaiman, and lyrics by Scott Wittman and Marc Shaiman (Grammy® winners for Hairspray; Smash), a book by award-winning playwright and adaptor David Greig (The Bacchae; Tintin In Tibet), set and costume designs by Mark Thompson (Mamma Mia!; One Man, Two Guvnors) and choreography by Peter Darling (Billy Elliot The Musical; Matilda The Musical).

A chocolate garden, an army of squirrels and the curiously peculiar Oompa-Loompas must be believed to be seen in this gigantic new musical that is choc-full of fantastical treats to dazzle your senses.

Charlie and the Chocolate Factory the Musical is about to enter its third year. For more information on the show and to book tickets head over to www.charlieandthechocolatefactory.com

Take a look at the brand new shots in our gallery below:

Advertisement. Scroll to continue reading.
In this article:Charlie and the Chocolate Factory the Musical