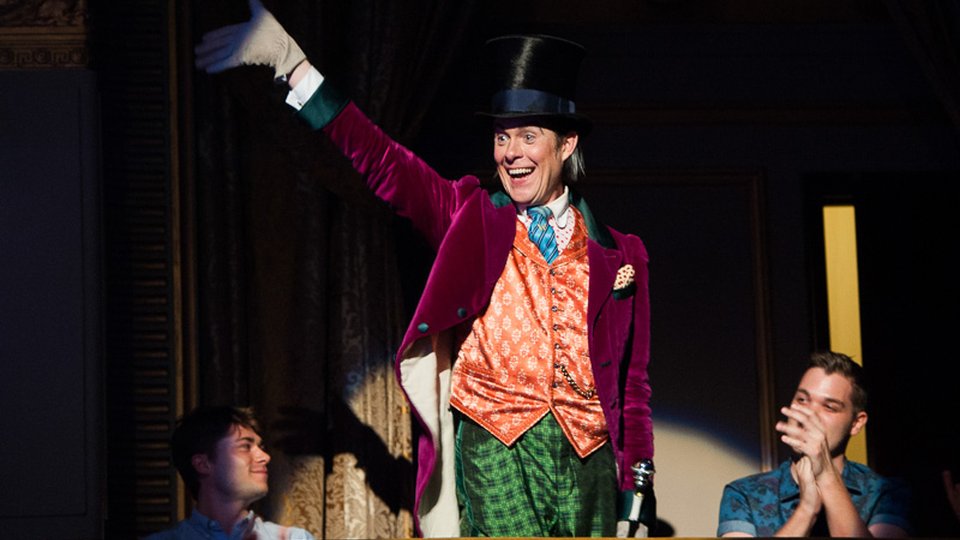 Roald Dahl’s classic story Charlie and the Chocolate Factory is one of the best loved in the world. In 2013 a musical adaptation of the story opened in London’s West End under the direction of Sam Mendes (Skyfall) to glowing reviews and impressive ticket sales. Almost two years on since the show began previews, Charlie and the Chocolate Factory the Musical is one of the hottest tickets in the West End regularly filling the seats of the Royal Theatre Drury Lane night after night. Last night we went to see the show for the second time to check out Alex Jennings who is now playing the central role of Willy Wonka, originally played by Douglas Hodge.

Charlie and the Chocolate Factory tells the story of young Charlie Bucket (played in this performance by Rhys Lambert), a boy who lives in poverty with his parents and grandparents. When it is announced that Willy Wonka (Jennings) has hidden 5 golden tickets in his chocolate bars giving each recipient a tour of his factory, Charlie sets his sights on finding one. As the tickets start to get snapped up by children all over the world, Charlie’s family begin to lose hope but the youngster finds the final one. Along with his Grandpa Joe (Barry James), Charlie enters Wonka’s factory and his experience is beyond his wildest dreams.

For those that have seen the two film adaptations of Charlie and the Chocolate Fatory, this musical production is closer to the Gene Wilder one than the disappointing Tim Burton remake that starred Johnny Depp. The world presented on stage is colourful and fantastical once Charlie and the other children enter the factory but the reality of the Bucket family living in poverty is presented in dark colours and shades of grey. The eye-catching sets are magnificent and from the opening moments right through to the final scene, Charlie and the Chocolate Factory the Musical is a real visual treat.

Original songs are peppered throughout the production with a nod to the 1971 movie in the form of Pure Imagination. One of the most powerful moments of the show comes during Wonka’s entrance just minutes before the end of the first half. Wonka steps out of his factory belting out It Must Be Believed To Be Seen as he welcomes the children and their adult companions into his world.

Elements of the story have been updated to give it a more modern and relevant feel but this doesn’t tarnish the original story that we all know and love. Each of the children is given their moments to shine as the news is delivered that they are the lucky winners of the golden ticket hunt. We particularly loved Augustus Gloop (played in this performance by Dane Juler) who yodels and scoffs his way through an interview with news reporter Cherry (Kate Graham).

Alex Jennings puts his own mark on the role of Willy Wonka. The role is so iconic now and we don’t envy anyone who had to follow in Douglas Hodge’s footsteps. Jennings brings out the more playful side of Wonka and he conveys a man who is teetering on the edge of both madness and mischief. Jennings is a seasoned stage performer and he brings real clout to the stage with his performance. Also worthy of note is Barry James as Charlie’s Grandpa Joe. He makes the character really endearing and often gets the funniest lines. One of our favourite moments from the show comes early on when Grandpa Joe, along with the other grandparents, try to keeps Charlie’s spirits raised with a song.