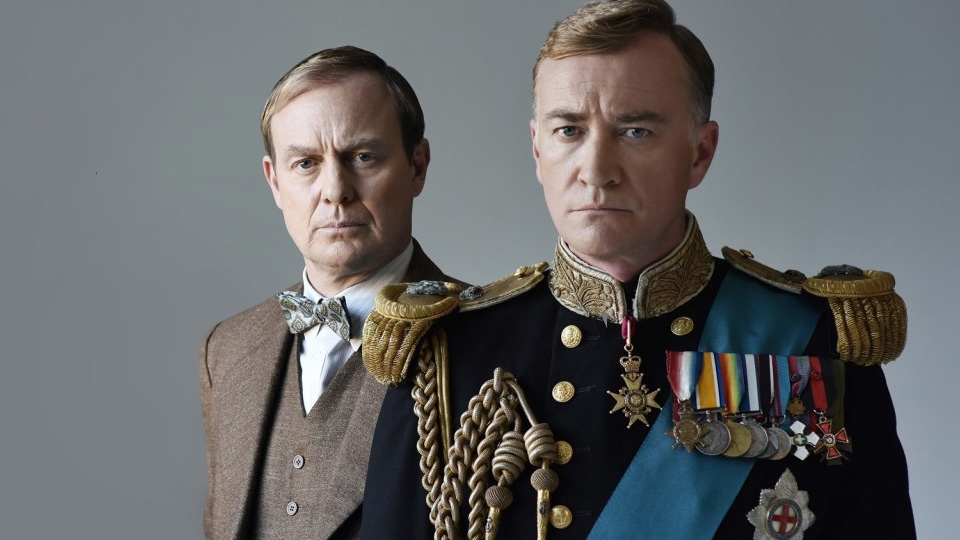 The King’s Speech arrives at Leeds Grand Theatre this month as part of a national tour. The inspiration for the award-winning motion picture, the play tells the story of George VI as he is crowned King of England, following the scandalous abdication of his elder brother Edward VIII. A reluctant leader bound by duty, George assumes the throne with a life-long secret: a severe speech impediment and fear of public speaking. Instigated by his wife Elizabeth, George begins an unorthodox term of therapy with Australian thespian Lionel Logue in a hope to prepare the King for a global address, upon which confidence in the entire British Empire hangs.

Like all fine drama documentary, The King’s Speech telescopes events and composites characters into a workable set-piece which has tension and pace, if not wholly burdened with historical accuracy. George VI, affectionately known as Bertie, is written with a rigid stoicism, typifying the attitude that the monarchy are stiff and detached beings, whilst Logue is polarized into an free-wheeling eccentric bohemian. The collision of the two characters, and their conflicting personas, makes for an intriguing and often humorous scenario, yet one which makes you occasionally question the authenticity of events. That is not to say that David Seidler’s script isn’t a fine piece of writing; the dialogue is sympathetic to the period, with an authenticity which avoids the trap of period pieces sounding like audible print. At just over two hours, the play admirably covers a relatively simple tale with pathos, levity and focus, with a level of detail that fortifies a depth to a world in which it is easy to become utterly adsorbed.

Reading from The Bard. Raymond Coulthard as King George VI with Jason Donovan as Lionel Logue.

The play boasts a good-sized cast however the burden of the piece is shouldered by Raymond Coulthard as Bertie and Jason Donovan as Lionel Logue. Coulthard evokes a stately presence as Bertie and cuts a strong physical presence on stage – arguably firmer than the King himself, who suffered a number of physical frailties – and vocalises the King’s speech impediment with a sensitive subtlety. Character stammers and stutters are notoriously tricky to perfect in dialogue and Coulthard’s realisation is expertly achieved, never disrupting the rhythm of the scene yet always highlighting the frustrations of the character. Coulthard also brings a human normality to the role, subverting the King’s knowing pomposity and providing some much-needed sympathy for a character who occasionally verges on the tyrannical. Jason Donovan’s Logue is agreeably animated and excitable, honing a cheerfulness and (unsurprisingly) authentic Australian charm. Donovan is quickly becoming a seasoned treasure in his middle years, proving his calibre as a dramatic stage actor that is well-evidenced in this play. With a number of scenes featuring just Donovan and Coulthard, the play often verges on being a two-hander which is sustained by a genuine sparkle that exists between the two actors.

There are also delightful performances from performers playing iconic characters, such as Felicity Houlbrook as Wallis Simpson, Nicholas Blane as a bravura Winston Churchill and Claire Lams as a surprisingly tenacious Queen Elizabeth.

The overall presentation of this show is worthy of special mention. A quick succession of scene changes – indicating the play’s filmic origins – is achieved through a huge teak checkerboard which at once appears like a mid-century recording studio yet has a series of doors and hatches which transform it from palace to cathedral to living room to ball room. Evocative and immersive, it is a masterstroke of stagecraft. The visuals are also matched by some excellent sound design which is imperceptibly realised, belying its technical complexity with gramophones and period technology.

The King’s Speech is something of a celebratory experience; a feel-good event which is engaging, emotionally stirring yet very funny. Befitting of its period setting it also has an old-time filmic tension to it, almost Hitchcockian in its deliberate use of pause and silence. In all, The King’s Speech is an excellent play, with a worthy reputation thanks to a fine movie adaptation. Theatre as entertainment with a message delivered with clarity, it is certain to be a popular outing for audiences this season.