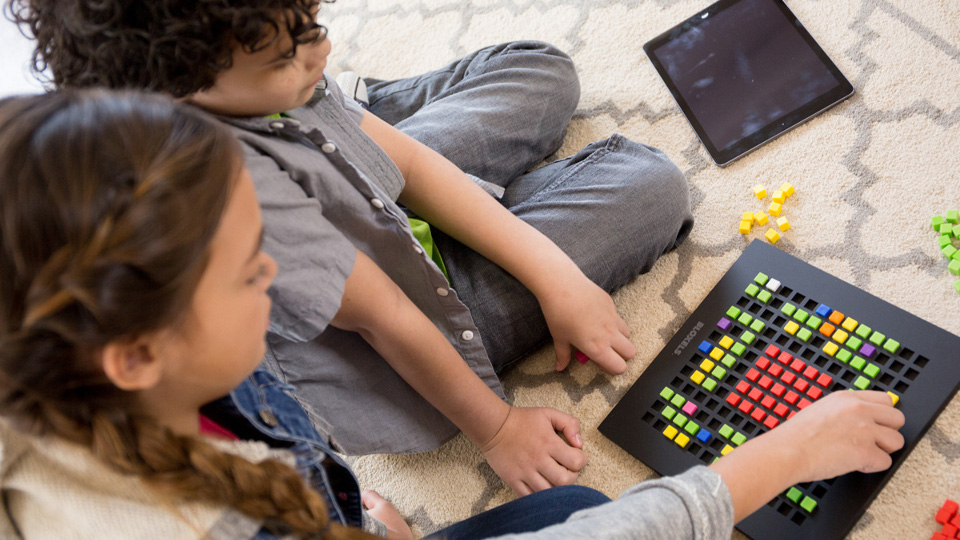 Earlier today, the build and play videogame Bloxels launched on Kickstarter, with the aim of raising $40,000. At time of writing, less that 8 hours after launch, backers have already pledged half of this goal with 29 days to go. From the minds of the Pixel Press team, Bloxels allows players to design their very own video game. This is done by placing physical blocks on a gameboard to create your own layout for the game, snap a picture with the accompanying app, then customize and play your game on a tablet or smartphone:

The Bloxels project allows players to place walls, choose where enemies and turrets spawn, and customize the location of coins. You can battle as a hero or a boss, and the more you play the more coins and gems you can earn towards upgrades – everything from classing up, expanding the size of arenas you can build, to unlocking new features and environments. It’s recommended for players 8 and up, but fun for game-lovers of all ages.

[quote by=”Robin Rath, Pixel Press Co-Founder”]It’s every child’s dream – to be able to build their very own videogame to play and challenge their friends. The incredible team we have at Pixel Press have been hard at work to make this dream a reality for kids of all ages. All we need now is the help of the amazing Kickstarter community to push Bloxels into production so everybody can start building and playing![/quote]

The technology that makes Bloxels possible is a process known as computer vision. Bloxels’ specially developed software allows the companion app to read the physical blocks layout on the gameboard, where each color represents an in-game object, which then transforms the information into a customizable and playable video game level on a tablet or smartphone. Each Bloxels gameboard creates one room in your arena, but once you capture it you can clear it off to add another room. You can connect rooms on all four sides, making it as complex or as simple as you want. Players can then test out their game and challenge friends or try to beat other people’s creations.

Bloxels combines the physical and digital world to deliver an immersive experience where your imagination decides how your game looks and plays. The first free app for Bloxels is B.R.A.V.E. Squad. It’s a top-down, dungeon exploring adventure where you can either take control of the Heroes with the mission to exterminate the villains or become the Boss defending your dungeon creation from other players – and your coins! The more you play, the more coins and gems you can collect which can be used to upgrade and unlock additional features. With Bloxels, the B.R.A.V.E. Squad universe is yours to create and conquer.

[quote by=”Rob Bennet, Head of Technical Operations and fellow Co-Founder”]We are confident that the app software ensures every game is an exciting, shareable and a uniquely hands-on experience. Bloxels has been developed from feedback from both kids and adults to make it the ultimate gaming experience. In the past you had to choose between creating or playing something – we’ve developed something that lets you do both. Bloxels is big fun for kids, and fun for big kids![/quote]

Bloxels is available on Kickstarter with the Early Bird pledge available for $40 which includes the Bloxels set, free B.R.A.V.E. Squad app, sticker sheet and a retro-style slap bracelet.

In this article:Bloxels, Kickstarter, Pixel Press