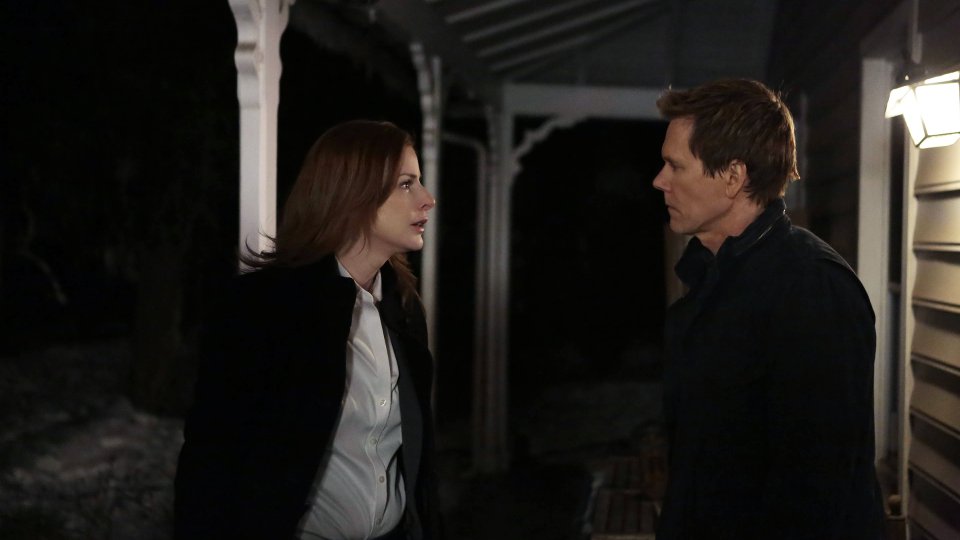 Joe Carroll (James Purefoy) may be gone but his spirit is still lingering around tormenting Ryan Hardy (Kevin Bacon) in the The Following.

If you haven’t seen the latest episode of The Following and don’t want any spoilers then we suggest you stop reading now. If you have seen it and want to relive the action then keep reading.

At the end of last week’s episode Ryan got drunk in a bar toasting to an imaginary Joe. It transpired that he was so drunk he picked up a woman in the bar and went home with her. When he returned to his apartment a furious Gwen (Zuleikah Robinson) greeted him and told him she was leaving him. After she left Gwen called Max (Jessica Stroup) and informed her that Ryan was drinking again and someone needed to look out for him; that someone wasn’t going to be her though.

Max headed straight over to Ryan’s apartment determined to keep him away from the drink by distracting him with work. She brought a case file that shed light on Theo’s (Michael Ealy) past and it turns out he was the only survivor when his entire family were murdered. Mike (Shawn Ashmore) arrived and they discussed the case Max had found noticing the broken mirrors in the photographs. Ryan told them it linked back to a case he once worked and he believed that was the connection that would get them to Theo.

The trio headed to Quantico to enlist help in finding the serial killer who murdered Theo’s family, known as Oleg (Robert Sedgwick). Ryan wanted to track him down and use him as bait to draw Theo out as Theo believed that his mother’s boyfriend was responsible for the murders. Ryan used the opportunity to work with agent Lisa Campbell (Diane Neal) and ditch Max and Mike so they couldn’t keep an eye on him.

Ryan and Lisa checked into a motel before Ryan headed to the last known address for Oleg without telling Lisa. During a search of the house, Ryan was interrupted and knocked down the stairs into the basement. When he managed to get himself back up, Oleg had gone. Lisa turned up and she was furious that Ryan had gone rogue in a bid to find Oleg. Max and Mike arrived at the scene and expressed worry over Ryan’s increasingly erratic behaviour.

Back at the motel Ryan continued to look through evidence from Oleg’s house and indulged in a few drinks from the mini-bar. Lisa turned up to speak about Ryan’s behaviour before returning to her room for a shower. Oleg arrived at the motel and killed the clerk before making his way to Lisa’s room. Ryan managed to disarm him and get him into custody. During his interrogation Ryan resorted to violence to get his answers and found out that Oleg was a friend of Theo’s, and he murdered Theo’s family after being asked to by him. He also revealed that Theo’s sister is still alive.

Ryan returned home to find the ghost of Joe waiting for him. His old nemesis told him he was better off without Gwen and encouraged him to have another drink.

Daisy (Ruth Kearney) and Mark (Sam Underwood) are making quite the team as they plot to target Ryan and co. They started off the episode waiting for Mike with Mark determined to kill him in broad daylight. Daisy saved his bacon when she noticed his security detail arriving to pick him up and talked Mark down.

Daisy took Mark to meet one of her acquaintances that she needed help from to find out who had her laptop. To get him to cooperate Mark threatened to ‘toast marshmallows off his face’. That would make us toe the line too. We hinted a little bit of a worrying whiff of romance on the horizon for Daisy and Mark, which we really hope doesn’t happen. The laptop was located at the FBI headquarters but Daisy’s friend refused to investigate further incase he got caught.

Daisy decided she had to contact Theo and posted a message on a website per the protocol he gave her if she needed to reach him.

Theo and his sister Penny (Megalyn) discovered that the co-ordinates they decrypted in Strauss’ (Gregg Henry) secret notebook led to a fancy house. They went to check it out and found the house was guarded by security and they were asked to leave. After stopping off to get some food, Theo located the guest list for a party taking place at the house and picked a target that bore a similarity to him so they could take their places as guests to gain entry.

After murdering their target and taking their places, Theo and Penny managed to get into the party and attempted to locate the host Eliza (Annet Mahendru). The party was some kind of sex/torture party for those with dark tastes. Theo and Penny worked their way through the party and located Eliza. Theo tried to strike a deal with Eliza to deliver Ryan Hardy to her but refused to tell her what he wants in exchange.

Tom (Gbenga Akkinagbe) tried his best to avoid Sloane (Monique Gabriela Curnen) all episode after she noticed some discrepancies in the report from the safe house raid. Panicking that it would be discovered that he took the laptop, Tom reluctantly offered to help. Sloan arrived at his apartment and started working through the notes from the safe house raid. As Tom went to get a drink of water, Sloan realised that Tom was lying to her. She got her gun out to apprehend him but Tom tried to stop her accidentally shooting her.

Tune in to FOX on Monday at 9/8c in the US and Sky Atlantic HD on Saturday at 9pm in the UK to see the next episode. Preview 2-hour episode The Edge / A Simple Trade below: