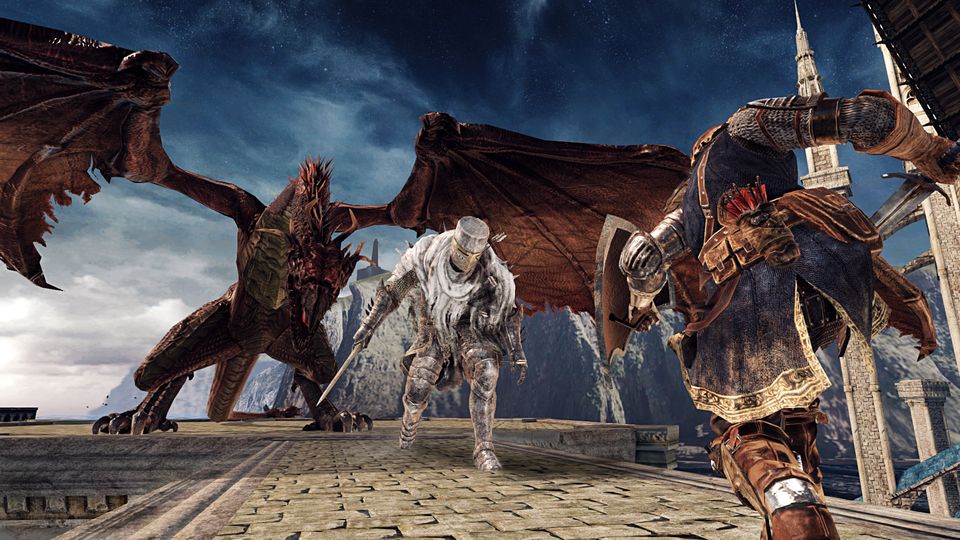 We fell in love with the first Dark Souls game when it launched back in October 2011. It was a delicious mix of fantasy RPG and punishing difficulty. It was tough to beat but such a satisfying and rewarding experience that it quickly became one of our favourite games of all time.

Last year From Software returned with an even more ambitious sequel but it left many fans disappointed that it wasn’t available for the new generation of consoles. However, to the delight of fans,  the game has now come to Xbox One and PS4. Dark Souls II: Scholar of the First Sin expands and changes the game in many ways.

The PC, Xbox One and PS4 versions also come with remastered graphics, framerate increased from 30fps to 60fps and expanded multiplayer features. Other changes include new bosses, a new NPC, performance improvements and many patches to the gameplay. The developers have also been through the entire game and tweaked things like enemy placement and items. These changes all help keep the game fresh even for the most experienced players.

Having played the Xbox 360 release last year we were feeling bullish as we headed back into the game. After breezing through the optional tutorial areas we quickly made our way to Majula which acts as the hub area. From there we headed straight for the Forest of Fallen Giants but our confidence was short lived as we were destroyed by a large enemy that wasn’t there before.

Dark Souls II is an incredibly intimidating game that demands patience and concentration. Areas that you might have mastered previously are new again and there are changes and surprises around almost every corner.  You will die often and getting stuck can become incredibly frustrating. We’ve re-rolled our character multiple times when things have become too tough in order to try a different approach.

Just like the changes for enemies there have also been changes to items. Things that you found helpful before such as a nice item or shortcut might no longer exist or may be found in different locations. There are also plenty of new items and shortcuts to discover.

Progress is the reward in Dark Souls II and even the tiniest step forward over your previous failed attempts can be rewarding. Progressing further and defeating the enemies and bosses becomes addictive. It’s a game that slowly gets easier the more you play as you increase your knowledge about how to tackle each situation.

Learning how to successfully navigate an area takes time but not as long as defeating the many bosses that lie in wait for you. The boss fights are tough and most will require multiple attempts before you can beat them. Learning what you need to do in order to defeat them is only half the fight as you also need to be able to execute your plan near flawlessly to stand a chance.

The graphical improvements are impressive and bring a lot to the game. The increased framerate results in a smoother experience and while the game doesn’t manage to stick to 60fps it does feel a lot less laggy during combat. The enhanced lighting model in particular adds a lot to the experience allowing some areas to require the use of a torch in order to see properly where you are going.

The multiplayer elements of the game have been expanded allowing for extra players to join the fun. Our favourite multiplayer feature is still the ability to add notes to the world for other players to read. It’s useful to provide hints but also capable of plenty of mischief. You can’t help but chuckle when leaving a false clue on the edge of a cliff suggesting treasure ahead knowing it will cause at least one player to fall to their doom.

Dark Souls II: Scholar of the First Sin is the definitive edition of the game. The myriad improvements, updated graphics, included DLC and expanded content make this essential for any Dark Souls fan. New players are in for a treat and it’s still a worthwhile purchase for veterans too. Highly recommended if you enjoy a challenge.

Advertisement. Scroll to continue reading.
In this article:Bandai Namco, Dark Souls II, From Software, Scholar of the First Sin