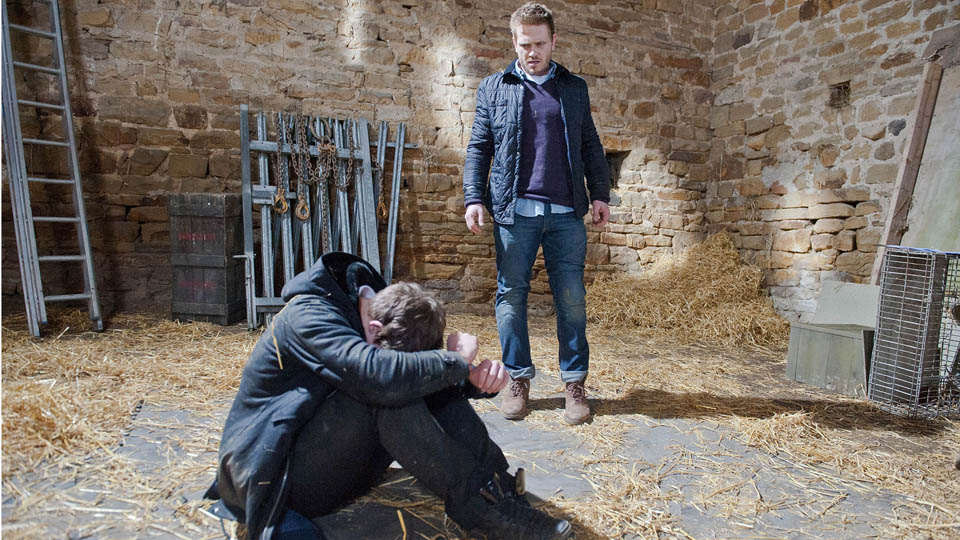 What’s going to happen in the dales this week?  Read on to find out.

As he arrives back from holiday this week, Lachy is relieved when he sees Belle and she explains she doesn’t listen to rumours.  However, when Lisa hears that Belle is hanging out with him, she orders Belle away.  Angry, Lachlan shouts at Alicia to tell the truth, inviting further pain when Cain gets involved.

Later Lachlan corners Alicia in the shop leaving her terrified and she starts hurling things from the shelf to stop him touching her.  Chrissie and Leyla hear the commotion and come running.  Is Chrissie’s belief in her son starting to waiver?

David decides it’s time to take matters into his own hands and bundles Lachlan into his car boot and takes him to an empty barn, but has he got the stomach for what he must do next?  Little does he know that he was spotted by a horrified Eric as he manhandled Lachlan into his car, who tells Alicia and the search begins to find them.

Meanwhile, Chrissie is wondering where Lachlan is.  She can’t resist checking his browsing history and realises he’s been lying to her, leaving her torn when she finds out what David has done – should she call the police?  She goes to talk to Alicia who tells her exactly what happened that night and is crushed by Lachy’s lack of remorse, but will she betray her own son to the police?

Tracy starts to feel that Andy is using her

Chas tells Andy he’s insulting Katie’s memory by sleeping with Tracy, which only makes him more determined to keep seeing her, but Tracy is starting to feel used.  When Andy gets a call from Sarah’s school offering him tickets for her play, he asks for two so he can take Tracy with him and allay her fears.  Debbie isn’t happy when she spots the pair, but soon Tracy storms off.

Andy then breaks down in front of Bernice when he sees an old school photo of him and Katie.  After their last encounter will Bernice be a shoulder for him to cry on or has he burnt his bridges there?

Pearl tries to cover up over the stolen money

Sandy finds Pearl’s IOU book and confronts to try and find out what exactly she’s been up to, but that’s the least of Pearl’s worries as she tries to divert Paddy and Rhona from a meeting with the bank and later from accessing their online bank account, for fear of being rumbled.

Under pressure, she tells them a big lie, which she then has to follow through with as the week pans out.  Can she live with the guilt or will Sandy reveal what’s been going on?  It can only be a matter of time before Paddy and Rhona realise what’s been going on with their money.

Emma encourages Ross to get with Carly, whilst worrying about Finn seeing HIV positive nurse, Darren.

Doug checks the marks on the booze bottles and it looks like Laurel has been at them.

Vanessa refuses to give Kirin another chance as she has more tests to see if she has breast cancer.