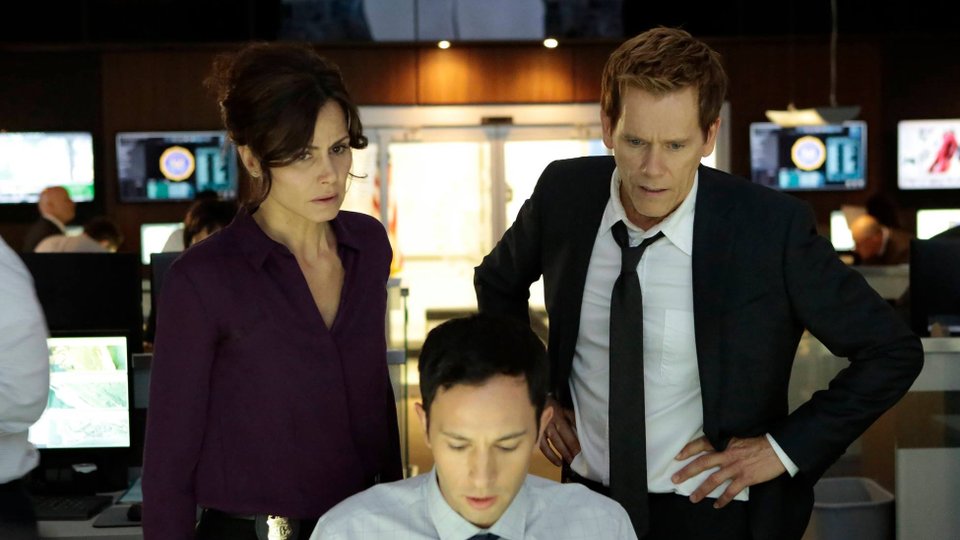 A grisly fate was promised for someone in the FBI in this week’s episode of The Following but did it come to fruition?

If you haven’t seen the latest episode of The Following and want to avoid spoilers we suggest you stop reading now. If you have seen it and want to relive the episode then keep reading.

It’s a nice day for a kidnapping

The Following’s latest loved-up murderers Kyle (Hunter Parrish) and Daisy (Ruth Kearney) selected another victim this week as part of Mark’s (Sam Underwood) revenge plan. After failing to pick up a woman at the supermarket, Kyle and Daisy broke into the woman’s home and tied her to a chair. It transpired that she was Anna Clarke (Joy Osmanski), the wife of FBI Special Agent Jeffrey Clarke (Felix Solis).

Using Anna to get to Jeffrey, the killers forced her to call him and lure him home. When Jeffrey arrived he was knocked unconscious and Daisy put a bag on Anna’s head to suffocate her. Jeffrey was then kidnapped and Anna left to die. Fear not though as Ryan Hardy (Kevin Bacon) and the FBI managed to discover Mark’s latest plan in the nick of time saving Anna. They found out she was the next target when they traced footage of Mark ditching Andrew’s (Michael Irby) car at a garage. They managed to find the garage in question and arrived just as Mark was escaping finding pictures of Anna plastered on a wall.

Mark called Daisy to tell her that the FBI had almost found him and advised her to act on ‘Plan B’.

Mark sent a video to the FBI informing them that Clarke would die unless they went on TV to admit that they had lied and covered up what really happened to Lily Gray (Connie Nielsen). Ryan and Mike (Shawn Ashmore) tried to dismiss it as the ravings of a lunatic but Mendez (Valerie Cruz) didn’t look convinced. Max (Jessica Stroup) tried to get Ryan and Mike to come clean but they refused.

Mendez ordered Ryan to go and visit Joe (James Purefoy) in prison when a connection was made between him and Andrew. Ryan refused but on digging deeper he found out that Joe and Andrew had both been students of Dr. Arthur Strauss (Gregg Henry). Ryan visited Strauss in prison but didn’t get much in the way of answers but suspected Strauss may be behind Andrew’s actions rather than Joe.

What’s in the box?

Clarke was transported to an abandoned warehouse where Neil (Glenn Fleshler) was waiting for them. Neil aka Plan B was introduced as an odd chap who looked after his elderly father and it turns out he’s a handy welder. Whilst Clarke looked on, Neil made a metal box but what was it for? Clarke managed to escape and found a room with cell phones in it. He called Ryan and was almost rumbled by Neil. As Clarke made his bid for freedom Kyle knocked him out and he woke up tied to a table.

The purpose of the box was then explained by Neil. He was going to paralyse Clarke from the next down so he could fold his body and place him in the box whilst he was still conscious. Of course if Ryan and co came through and either a) went public with the truth or b) saved Clarke then he would be spared the horrific ordeal.

As Ryan and the FBI closed in on the location after tracing the call from Clarke, Mendez sent them a video of Clarke admitting to his part in the cover-up. As Ryan entered the warehouse he and the team found it empty but discovered Neil’s box in the middle of a room with a trail of blood leading up to it. On top of the box was Clarke’s FBI badge and it was confirmed that the team was too late to save him.

In a bit of backstory for Clarke we saw that he had suffered from heart problems following the events of season two. His doctor was Ryan’s now girlfriend Gwen (Zuleikha Robinson).