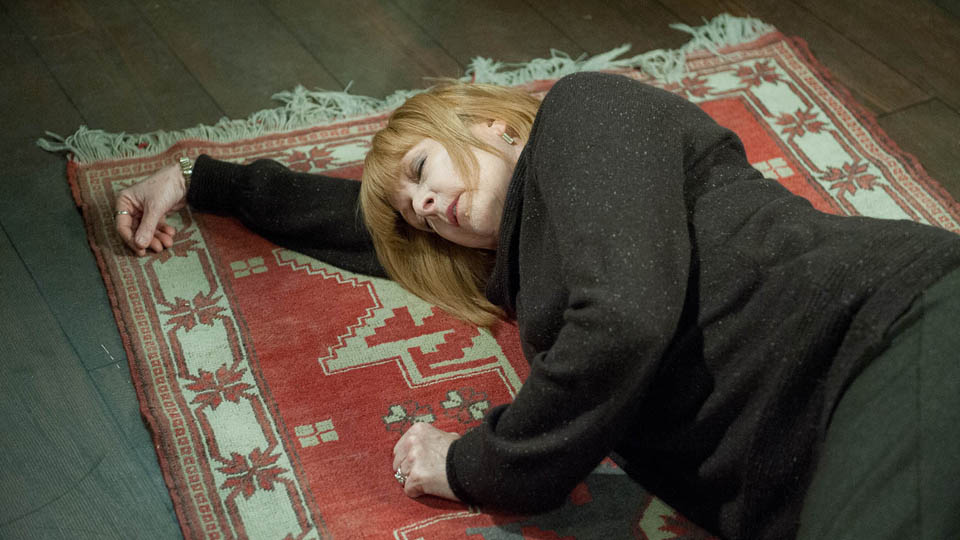 It’s another dramatic week in Emmerdale as stalwart Val collapses and the aftermath of Lachlan’s assault on Alicia hits the village.

Val isn’t her usual self this week and has Finn worried when her cough shows no sign of improvement.  He nags her to go to the doctors and resorts to a different tactic, but will his efforts backfire?

Later on, Val tries to cover up her breathlessness in front of Eric, but as she’s getting herself ready on her own, she has a coughing fit which leaves her collapsed on the floor.  Soon after, Emma and Finn find her, and unsure that she’s breathing, they call an ambulance.

At the hospital, there’s a worrying wait for news about Val’s condition as she remains unconscious.  Eric demands to see her and is left devastated when her breathing worsens and the machines begin to sound.  Val’s son Paul arrives shortly after and the family prepare themselves for the worst as a nurse approaches.

Has the feisty red head run out of fight?

Alicia’s taken aback when Lawrence has a proposition for her.  David sees the Home Farm clan heading to the pub and it’s not long before there’s a showdown in full view of the village.

With the news spreading like wildfire, Alicia must tell Jacob, but is worried how he’ll react.  She’s determined to hold her head high and goes to do her pub shift only to hear Georgia passing opinion (and earning herself a slap from protective Leyla!).  When David arrives with the police Alicia is surprised at the news.

DC Bright tells Chrissie that Lachlan has no case leaving her outraged.  Lisa takes it upon herself to visit Alicia although she’s reluctant to talk, but later Alicia admits something to a shocked David and Leyla.  Alicia’s confidence is knocked and she’s scared to leave the house for fear of what everyone is saying about her.  She decides to try another shift at the pub, but Leyla and David aren’t buying her brave face and are worried for her state of mind.

Andy makes a move on Bernice

A rough looking Andy arrives to see his kids, but the visit doesn’t go exactly to plan leaving him and Sarah even more distant.  Debbie and Victoria are worried about his behaviour and confront him, with Victoria accidentally spilling beer over the wedding album he’d been sleeping on the sofa with.  Andy throws them out in a rage and then hits the bottle in the pub.

Seeing the state he’s in, Bernice invites Andy back to hers where he tries to snog her, but surprisingly she pushes him away only for him to keep trying.  Bernice slaps him and he leaves in shame, but as he leaves he sees Tracy and has a new target for his affections.

Pearl takes cash from the petty cash tin at the vets to pay her bills, fully intended to pay it back.   Later she cancels her direct debit for her gas and gambles on a horse that doesn’t win.  As her worries increase she’s handed a signed blank cheque to fill out at work, will she be tempted to make it out to herself?

Ashley suggests that Laurel could help Bernice with her new make-up party business.

Jimmy turns 50, but is worried about Nicola and asks Lawrence to send her to Dubai instead of him.

Kerry and Tracy are at war!  Which of these determined ladies will come out on top?