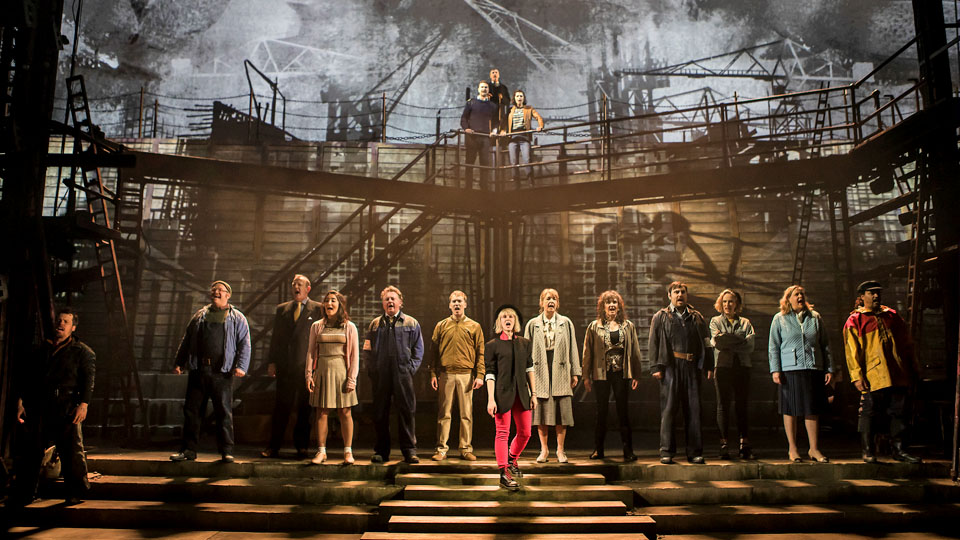 The Last Ship pulls into Leeds Grand Theatre this week as part of a national tour, presented by Karl Sydow and Kathryn Schenker in association with Northern Stage.

Complete with a score and lyrics from Sting, the musical retells the orchestrated collapse of the shipbuilding industry in the North East, and its impact on the region throughout the Eighties up to the present day.

As a major ship nears completion, tools are suddenly downed when government declares the shipyard is running at a loss and the great vessel must be broken up for scrap. As the last generation of shipbuilders face redundancy, a wandering sailor returns home after years at sea. Seeking an old flame, he discovers a shocking secret and a once unshakable community on the edge of ruin…

Drawing inspiration from Sting’s 1991 album The Soul Cages, Lorne Campbell’s script offers a vivid composite of real-life events told through operatic folk music and dramatic, cutting-edge stagecraft. Combining socio-historical fact with a little magical fantasy, the play is an epic retelling of the final chapter of the shipbuilding industry – a powerhouse never to be revived – and explores the echoes which continue to resound.

This is a play about the lifeblood of a community and the callous murder of an industry. Whilst some self-aware political telegraphing is a touch on-the-nose, the story remains poignant and well-studied. A cutting caricature of the Iron Lady is hilariously transposed into a local MP and a ruddy-faced union hero brilliantly evokes Walter Harrison and Arthur Scargill. The political landscape is well established by these divisive characters, but don’t expect a detailed dissection of the complexity, contradictions and wider political struggles of that time. The focus of the play is on the human impact of dislocated political decisions.

The Last Ship works best when tensions are explored through its brilliantly developed characters with Sting’s stirring, elegiac score. Much of the story is told through Sting’s lilting lyrics, with the memorably foot-stomping We’ve Got Now’t Else providing a recurring, defiant theme throughout. Richard John’s musical direction delivers volume and scale with a modest, stripped-down band, allowing the folk accents of a melodeon and violin to poignantly evoke the struggles of its people.

Fans of The Police will instantly identify the vocal patterns in All This Time and It’s Not the Same Moon, echoing the distinctive Sting inflection which is brilliantly captured by Richard Fleeshman’s lead vocal. Fleeshman is one of the hottest properties in musical theatre at the moment and his energetic performance as Gideon, a sailor finally returning home, is perfectly realised with warmth, charm and outstanding vocal capacity.

A large cast provides an impressive range of charisma with a vociferous chorus. Frances McNamee issues steely opposition as Gideon’s lost love Meg, showcasing a stunning vocal range. Charlie Hardwick as the ever-resourceful Peggy steals scenes with cheeky charisma, heartfelt pathos and a rousing vocal. Joe McGann provides the perfect partnership; an actor who effortlessly breathes honesty and integrity into every performance, which is typified in his moving portrayal as Jackie.

The Last Ship equally excels in its remarkable stage presentation, which is achieved through multiple layers of gauze and projection effects, combined with photo-realistic scenery. There is a genuine cinematic feel to much of the action, offering astonishing scale and depth. A closing montage using judicious lighting showcases a sequence akin to the imagery of Bohemian Rhapsody, adding to the whole baroque folk feel.

The Last Ship is a very different-feeling musical among its peers. It’s decidedly modern with its technical presentation and structured storytelling, yet it embraces the gentle narrative pace of classic stage drama. Reimagining an important, local story about pride, partnership and purpose, this stirring and haunting production offers an insight into the recent past, with a shocking poignancy for the present. Be sure to see it before it sets sail.