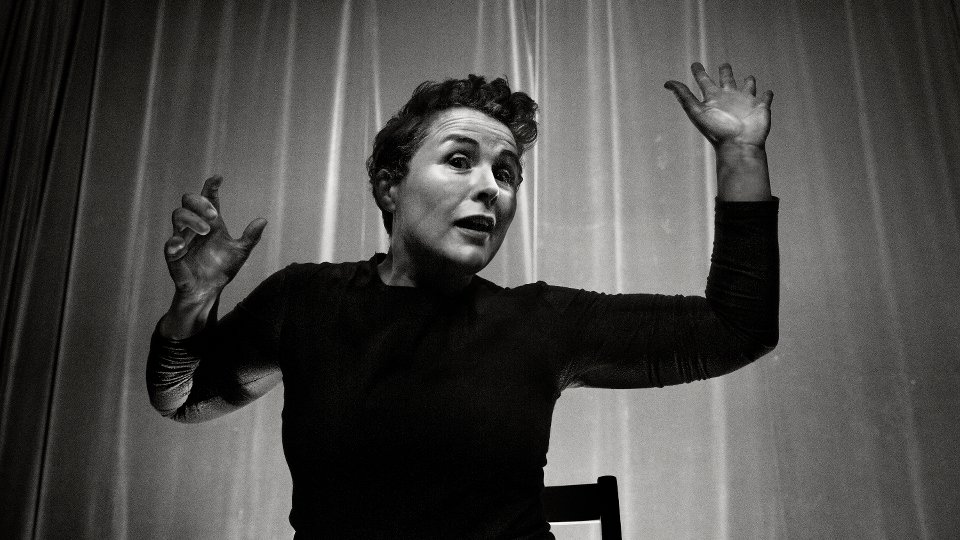 Following performances last summer of Red Ladies at the Southbank Centre and Margate Turner Contemporary gallery, the genre defying Clod Ensemble return with an intimate show with an original dark fairy tale at its heart. Since the company’s inception in 1995, Clod Ensemble has collaborated with artists working in a wide range of media. Showing at the Soho Theatre, The Red Chair is a one woman show, performed by Sarah Cameron.

The Red Chair is a dark and food ridden, tounge twister of a show, completely trickled over with a strong Scottish lilt. The Scottish lilt is so strong, that at times Sarah makes it sound almost completely Shakespearean. Complex word play and a visually expressive performance makes for a powerful ambience. The Red Chair tells the story of a father who eats and eats until he turns into the chair he is sitting upon, which sounds like something out of a Roald Dahl children’s novel, make believe and funny. The story also tells of the wife who is doomed to cook all of his meals and their ‘inveesible’ daughter.

The show has been created in collaboration with Sarah Cameron and we read that her background covers studying sculpture at the Chelsea School of Art and theatre at Ecole International de Theatre Jacques Lecoq. When you see her performance, there is no doubt of her artistry and creativity. Sarah gives a stunning performance and provides a one woman show for almost two hours solid, without an interval. We always feel that a one person show can be a big task, yet Sarah keeps the audience engaged for the whole time. Sarah is an excellent storyteller and by watching her performing, you just want to sit there and take everything in and try to make sense of it all. The show is so faced paced though, that you don’t have much of chance to ponder what has just been said.

The Red Chair is mythical and full of an otherworldly sense of direction. At times, it can be a little difficult to follow, as the word play seems to run away in the show and the speed of diction is also crazily fast, to the point where at times, all that is missing is a few beats in the background and it could be mistaken for a rap. If Eminem wants a challenge, he should give Sarah a call, perhaps they could have a war of words, could he find something to rhyme with Kholrabi on the spot, we wonder?

The show won’t be for everyone, as it seems that it’s very in the kind of artist mould, in the sense of ‘I’m an artist, isn’t this a great piece of work’ feel. A simplified version would perhaps make the show seem more accessible to all. That said, it’s still a stunning piece of theatre and the little quirky pieces of food that we’re given mid performance adds to the overall atmosphere of a very clever and unusual show.

In this article:Sarah Cameron, Soho Theatre, The Red Chair