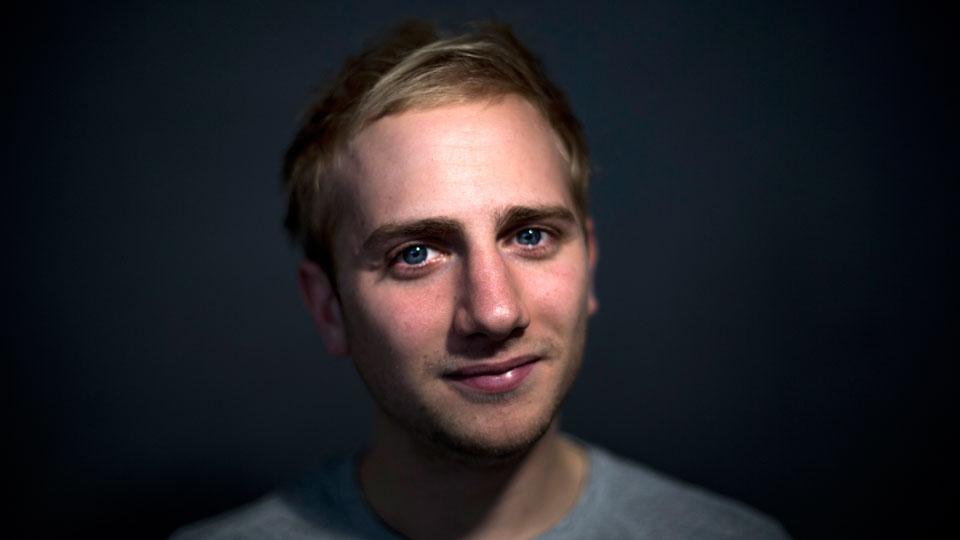 Simon Longman is a playwright whose acclaimed play Milked is about to receive a London airing at the Soho Theatre.

The play won Simon a bursary from Channel 4, and he was formerly the writer in residence at Pentabus – a theatre company dedicated to telling stories about the countryside.

We caught up with Simon to find out where the story of Milked came from, who the tale of two country boys will appeal to, and where he’d love to see the play performed.

Tell us a bit about the story of Milked.

Milked is about two friends, Paul and Snowy. They’re both in their early twenties and live in the middle of the countryside in Herefordshire. Paul is trying to find a job. And not doing that great at it. And Snowy is just trying to find himself. Snowy accidentally finds a cow that looks kind of poorly in the field. And then trying to cure it becomes a welcome distraction.

Are the characters based on anyone you know?

Not directly. But they are definitely influenced by my time growing up in rural Herefordshire and trying to work out what to do with my life. The countryside is obviously beautiful, and the space and silence that you can find there is amazing. But for someone trying to find work, it can be incredibly limiting, making you feel like the world is moving forward without you.

The way the two characters talk to each other is inspired by how my friends spoke: making jokes and doing everything possible to fill the silence with some kind of noise. Milked is kind of about when those jokes run out, and the thing you’re trying to distract yourself from is staring right at you.

I like the idea of a play set in the country being staged in the middle of the city. How will Soho Theatre be used to transport audiences?

Production image of Milked, playing at the Soho Theatre in March.

Who will Milked appeal to the most – country people or city folk?

I hope it appeals to both. It’s about unemployment which, unfortunately, is something that doesn’t seem to get any easier as time passes. Especially with news stories from the government proudly announcing unemployment being down and things like that. But when you look slightly closer, you can see that overall it’s still an issue that can cripple confidence and unfairly make people feel like they are failing still. There was a news story yesterday that while overall employment is marginally up, unemployment in young people is at record levels. It’s a frustrating and difficult feeling to work out. And one that is sadly common to so many people. So hopefully people in both the countryside and the city will take something away from what the play is trying to look at.

Tell us about the Channel 4 Bursary, and what it was about your work that won it for you.

The Channel 4 Bursary is an award for playwrights that gives you the opportunity to be a writer on attachment with a theatre company for a whole year. Basically, a writer is nominated by a theatre or theatre company and the bursary is awarded to the writer to work with that company. So Pentabus nominated me and we managed to win one of the bursaries. Which was pretty overwhelming. Milked was the play that Pentabus put forward for the award. I’m not sure what it was about it that won it for me. I think it was seeing something that looked at a pertinent issue but in a rural setting. Whatever it was I’m massively grateful for the opportunity!

Will this version of Milked see any changes from the original 2013 production?

Production image of Milked, playing at the Soho Theatre in March.

The play is travelling about a bit on tour, but is there anywhere you’d love to bring it to that hasn’t yet hosted it?

It would be amazing to see Milked performed in the North and see how audiences respond in places like Northumberland and Cumbria. The countryside I’m really familiar with is in the West Midlands and I would really like to see if people from other rural areas see something in the play. Each area of the country has a real sense of identity and it would be lovely to see what people from other rural communities make of it.

You’re the writer in residence at Pentabus. Tell us a bit about the company, and what works we can expect under their umbrella.

I’m actually not the writer in residence anymore! I was all of last year because of the Channel 4 bursary. So was on attachment to the theatre for 2014. But Pentabus are amazing and doing loads of really exciting things. They’ve won the Channel 4 bursary again to work with a playwright called Joe White who is brilliant. They’ve got a play for young people by Alice Birch going on in the summer called The Lone Pine Club which is going to be amazing. And beyond that they’ll be doing their village hall tour bringing a brand new play by a really exciting writer to loads of places around the country. So as a company they are completely committed to bringing new writing and new stories to areas of the country that, unfairly, don’t have easy access to new theatre. As a company they have shown a huge amount of faith in me and my writing. Just hope that I can justify that!