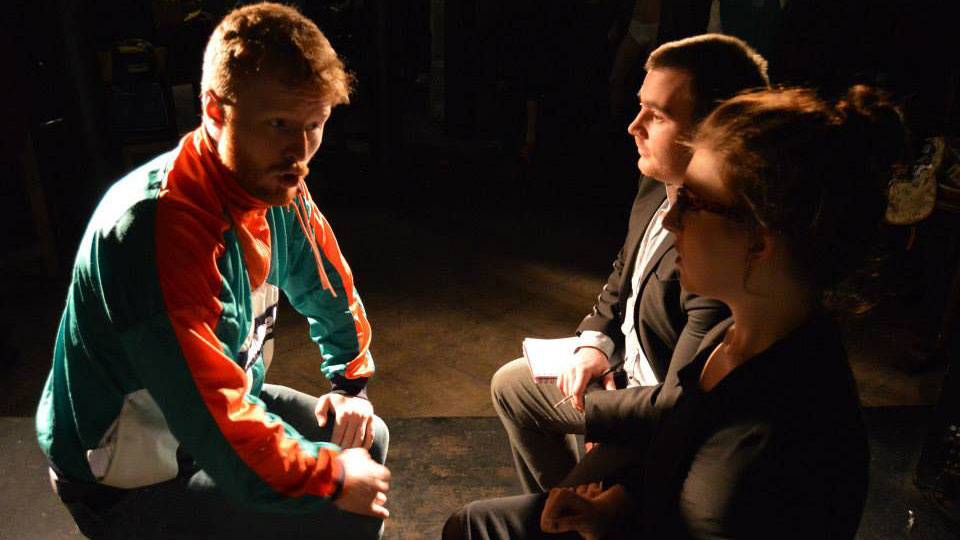 Greg Esplin is an actor whose company In Your Face Theatre is about to present a stage adaptation of Trainspotting at the King’s Head Theatre in Islington.

Greg will be taking on the role of Tommy, the moral heart of Irvine Welsh’s dark comic tale of drug and alcohol abuse in the poverty-stricken areas of Edinburgh.

We spoke to him to find out how he’s approaching the iconic part, what Irvine Welsh made of this production, and how the show went down at the Edinburgh Fringe last year.

Most people will have seen the film and/or read the book, but what can audiences expect from this stage adaptation?

The stage adaption by Harry Gibson is actually very true to the book but also still maintains a lot of the classic scenes from the film. The book is an absolute classic in my eyes and I think it was important that the stage adaption stayed close to that as well. You really get to know a bit more about the other characters in it which really helps drive the story along. Of course we know a lot of people are coming along because they loved the film and I don’t think they will be disappointed!

How do you see the character of Tommy?

Tommy – in my eyes – is a very important character in the book, film and stage adaption. All be it that his role in the film is not half as big as it is in the stage version. Tommy appears to be the only actual piece of morality in the text. While all the other characters appear to go through life on drugs and alcohol with no real consequence, Tommy falls in to the heroin trap and suffers a tragic and rather whirlwind downfall. Everyone knows a Tommy, I think. He’s the happy go lucky guy who is a bit of a jack the lad but is perhaps stuck in the wrong crowd. He is a lot more empathetic than the rest of the characters appear to me. He’s easy to love.

People may have preconceptions about him after Kevin McKidd’s big-screen portrayal. Do you have that in mind, or are you giving Tommy an entirely new interpretation?

Kevin Mckidd really did a fantastic portrayal of Tommy and it has really helped me with my study of the character. However, the stage adaption seems to focus a lot more on Tommy’s downfall and this gives me a lot more of a spectrum to play with. The most important thing for me is that I stay true to the text and the character that Irvine Welsh created. I definitely have put my own interpretation on the character as I think it’s hard not to when you have so much freedom to explore your character.

Are you enjoying working with this cast?

I love it! Nothing has prepared us better than performing at the Edinburgh festival together three times per day! We’re like a big family now. I think it’s important that we really trust in each other so that we can create a great ensemble energy that the audience will be able to feel. Plus we have to live together in one house while we are in London so it helps to get along.

Greg Esplin with the cast of Trainspotting.

What was the reception like for the show at Edinburgh?

It sort of blew us away to be honest. The reception was unbelievable; I mean we almost sold out completely three performances a day for the whole festival with a capacity of fifty per show. The amount of audience members who would stay behind to speak to us was really touching. We had this one lady who came in tears and just couldn’t stop saying ‘thank you’ and hugging all the cast and told ‘every mammy in the world should see this play’: it was heartbreaking. That really made me realise how important theatre is and how we can really use it to get a message across. The fringe was great and I hope London will be to.

We understand Irvine Welsh has seen the show. What was his reaction to it?

He said he was blown away! Also, he told us that it was the first time he’d seen anything to do with Trainspotting in ten years and he loved it. We breathed new life into an old dog was one of his quotes. He was absolutely brilliant to speak to, so down to earth. He stayed for a good twenty minutes and we all chatted and got pictures, it was lovely. Before he left he asked ‘are you going to tour it?’ and here we are now, on our way to London!

Will everybody understand the Edinburgh accents?

I hope so! Yes they will, we have worked a lot on making sure no one misses the performance because of accent but we have also stayed true to the text. We had so many people who weren’t Scottish come see us during the festival and speak to us after telling us how much they loved it dye ken wit ah mean likesay!?

You’ve worked a few times for In Your Face Theatre. What do you like about their productions?

I actually run the company now! I love their productions! All though I run the company I see us as a big family. A lot of us have worked on the same productions together which keeps the ensemble feeling together. We are sort of like a rep theatre but not quite. The company is all about giving the audience an experience and making them feel as much a part of the production as the actors. There is no hiding on seats from us. I hope you guys enjoy the show as much I love being a part of it. Thank you very much interviewing me I’ve had a great time sitting drinking my tea!