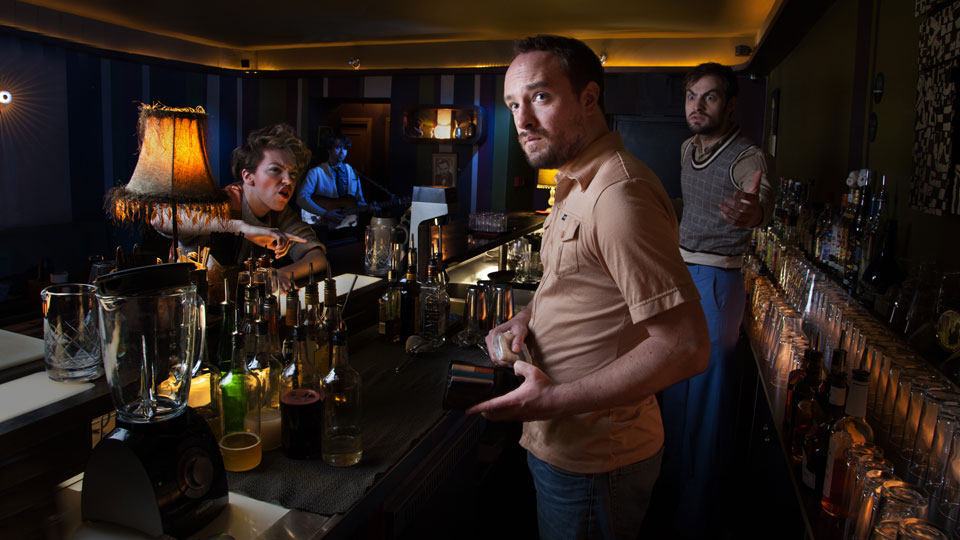 Ablutions is a short, one-act play about an American bartender’s crisis, which sees his marriage fall apart as his addictions take hold, and a road trip to Vegas during which he confronts his inner demons. The script is funny, its observations perceptive.

The events are related by the barman (Eoin Slattery) in second person, which places the audience at the centre of the drama. Around the barman, various characters flicker in and out, played by Fiona Mikel and Harry Humberstone who step from a band at the back of the stage, as he lurches from one disaster to the next. Music is an effective part of the production and conveys an often uneasy atmosphere.

Slattery is a fine narrator, and his prowess for storytelling takes the audience on a journey worth experiencing. Moments acquire poignancy: Slattery speaking to a rude barman in Vegas and seeing so much of himself in the man on the other side of the counter is a fine moment.

Ablutions will appeal to anyone whose palate enjoys stories of heavy drinking and road trips. It has a few weaknesses, such as difficulty discerning which character is speaking to the barman at any time. This isn’t the fault of the actors: Mikel and Humberstone are fantastic at quickly establishing characters (we especially enjoyed Humberstone’s creepy Curtis and reptilian health food salesman; and Mikel’s ghostly Audrey Hepburn) and ensuring they are distinct with their voices and movements; but with so many characters in a short story it’s sometimes hard to keep up. There is, perhaps, too much going on, though the anarchic way in which the story evolves is reflective of the frantic mind of the narrator. The production values are minimal too. This is a stripped down, bare show, which works in favour of the barman’s at times nihilistic worldview, but be prepared for stark and ungilded theatre.

Ablutions works on its own merits as a story about hitting rock bottom. There’s nothing startlingly original about it, and the success or otherwise of the production will lie for individual audience members on the degree to which they’re taken in by the world on offer. We liked it for its humorous and truthful take on our battle/romance with demons, other people, and life in general.