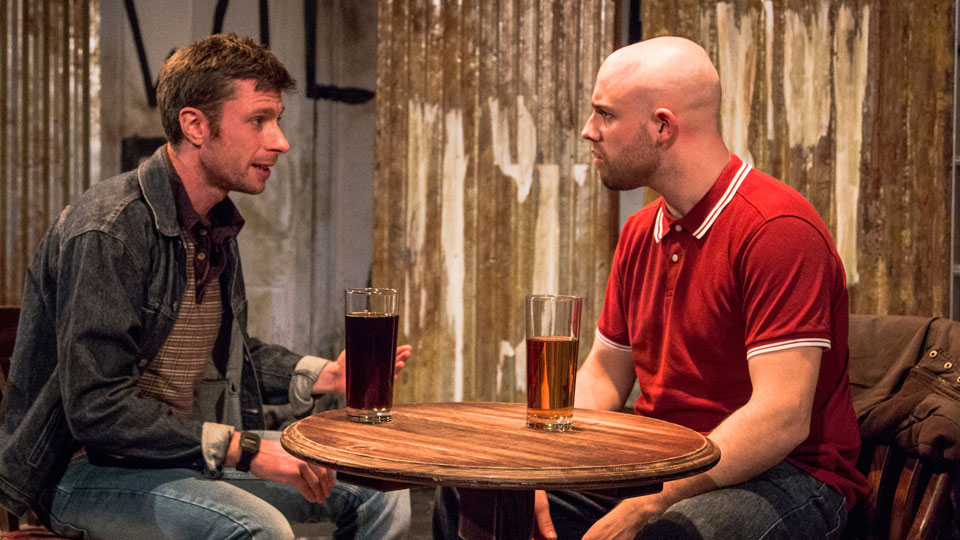 Marching On Together is playing at the Old Red Lion Theatre before touring in Leeds, where the play is set. This great piece of new writing by Adam Hughes takes us back to the 1980s: for many, especially in the north, a time synonymous with joblessness, strikes and football hooliganism.

Macca (Adam Patrick Boakes) is the former leader of the notorious Service Crew, the organised gang of hooligans who brought terror to the beautiful game (in the days before it was all that beautiful). He’s been in prison for three years after a conviction for assault and, on his release, expects to find his community exactly as he left it. Yet best mate Jono (Jim Mannering) is growing up, growing apart, and is now more interested in spending time with his family than creating riots at football matches. Macca’s partner Linda is increasingly distant, and his young son barely knows his dad. Even the old gang has gone, replaced by a new one led by cocky new rich boy Nathan (Alex Southern), who thinks Macca is past it. Against competing loyalties, Macca struggles to find somewhere he still belongs.

Adam Hughes’ play expertly plunges the audience into the world of 80s hooliganism and the dialogue is strong and authentic. Like some of the choice expletives that trip from the tongues of the characters, Marching On Together is perhaps a little rough around the edges. A few scenes feel as if they go on too long, though that may be because of repetition: whereas there’s a natural and skilfully picked out development to Macca’s relationships with fellow fans, his troubled interactions with his partner Linda (Donna Preston) tend to cover the same ground. The second act doesn’t feel quite as solid as the first, with a few set-ups left unresolved, and the character of Jono (helped in our assessment no doubt by an enjoyable, warm and authentic performance from Jim Mannering) sadly sidelined.

Marching On Together works perfectly at the Old Red Lion because it brings the audience close to the action, and the performances keep the attention, as well as the palpable tension. In the lead role of Macca, Adam Patrick Boakes is good, but at times tries too hard to externalise Macca’s vulnerability, the result of which can come across as mechanical. When he hits the right notes, especially as Macca coming to life on match day, he’s electric. The character of Nathan is a dream for any actor to play, since he has many of the funniest lines, but Alex Southern is delightfully entertaining throughout. Joshua Garwood is terrific as Nathan’s lanky sidekick Tommy, and gives his character an unexpectedly rich and sincere journey.

Max Dorey’s set design also adds to the effect of the play. The corrugated iron and old-school scoreboards are evocative of the epoch, but also usefully noisy. A soundtrack of 80s classics smooth over the transitions between scenes, and director Joshua McTaggart doesn’t miss any of the nuances of the story.

Anyone interested in 1980s British culture should see this play. If you remember the times, you may well find it hauntingly nostalgic. But anyone keen to see a piece of new writing and a passionate play that pulls no punches, we would recommend Marching On Together.

Check out our interview with playwright Adam Hughes.