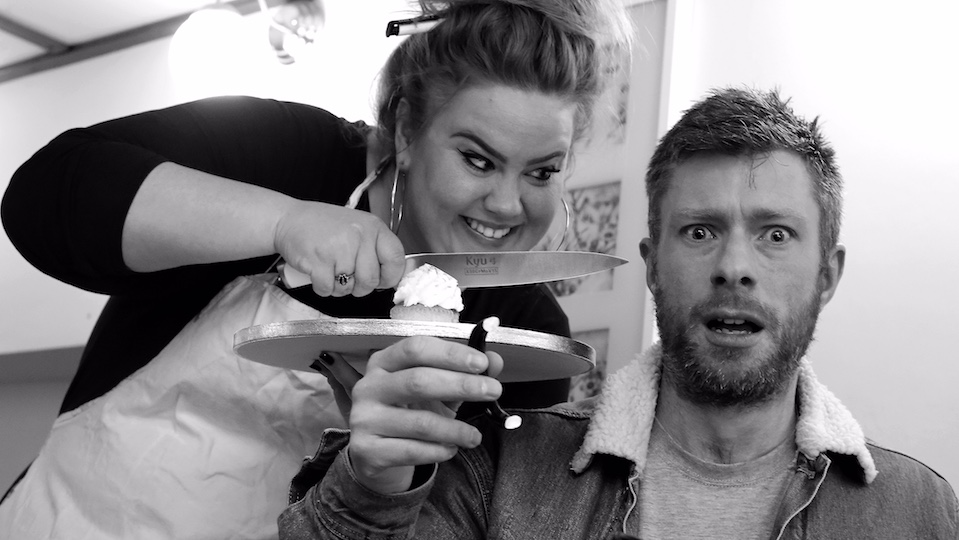 In a non-specified UK town in a high street lined with pawnbrokers, pubs and betting shops lies a seemingly ordinary greasy spoon, the Café Of The Damned.

As the audience enter The Etcetera Theatre we see a dishevelled chap sitting reading a book at a plastic gingham-covered table. One of four near-identical tables that comprise the sparse, static set, along with three chairs.

The action opens with Princess, the café manager, striding across the set to write ‘NO EGG’ on the previously blank Specials board. It’s the first of many amusing moments brought by Rekha John-Cheriyan. She plays Princess for laughs from the off, rabbiting on about brioche and quinoa in a likeable estuary accent to her one and only customer, Christopher (Matthew Carter). Princess clearly wants to take her cafe more upmarket but it’s the clientele that will inevitably drag her down.

Christopher is timid, anxious and somewhere unspecified along the autistic spectrum, Carter’s convincing without going OTT in his stammering portrayal. Quite the opposite of laid-back local Princess, Christopher’s well-spoken, easily agitated and it is quickly revealed that he’s got a keen crush on the Polish waitress, Petra, who turns up late to her shift in a fluster. At first Petra (Beth Mullen) appears somewhat two-dimensional but she leaves a striking impression as the play unfolds.

In turn, we meet CJ (humorously portrayed by David Hemsted) – he’s a cheerful waster, wandering from the bookies to the ‘Spoons clutching his guitar, always on the cadge for cash. And so this unlikely set of characters collide as the tension builds. Christopher’s ‘innocent crush’ takes a creepy turn and CJ presents Christopher with a favour to ask of him. Slowly, some dodgy dealings in this one-horse town are uncovered as Petra’s husband, Tomas (Jim Mannering), bursts into the action. We know sparks are going to fly – and a few fists – much to Christopher’s distress.

Directed by, written and starring Jim Mannering as the unhinged Tomas, he’s generously given the laughs to his co-stars, while keeping all the bad guy menace for himself. It’s always more fun to play the baddie and Jim gives a forceful performance.

Last year Jim Mannering’s debut play, Dark Room, won Player-Playwrights ‘Play of the Year’ award 2017. Describing The Café Of The Damned Jim said, ‘This is the second of a trilogy of plays, they are all unrelated and stand alone stories, but set in the same quirky world. Dark Room was the first of the series. These are apparently ordinary people all leading intriguing lives. I’m interested in creating pared-back, gripping stories animated by excellent actors.’

He’s achieved his goal. The climax fell a little flat, and direction in some fight scenes was a little clunky but with such a limited space to work within, it’s forgivable. Cafe Of The Damned is a fun comic thriller which I suspect is intentionally a little rough around the edges. We all know the best laughs come from wobbly sets and a sense of realism rather than too polished a product. The plot holds the audience’s suspense, with some unexpected twists, and there’s a healthy sprinkling of laughs to keep us amused along the way. Here’s to seeing whatever the third instalment in the trilogy of Jim’s dark universe will bring.