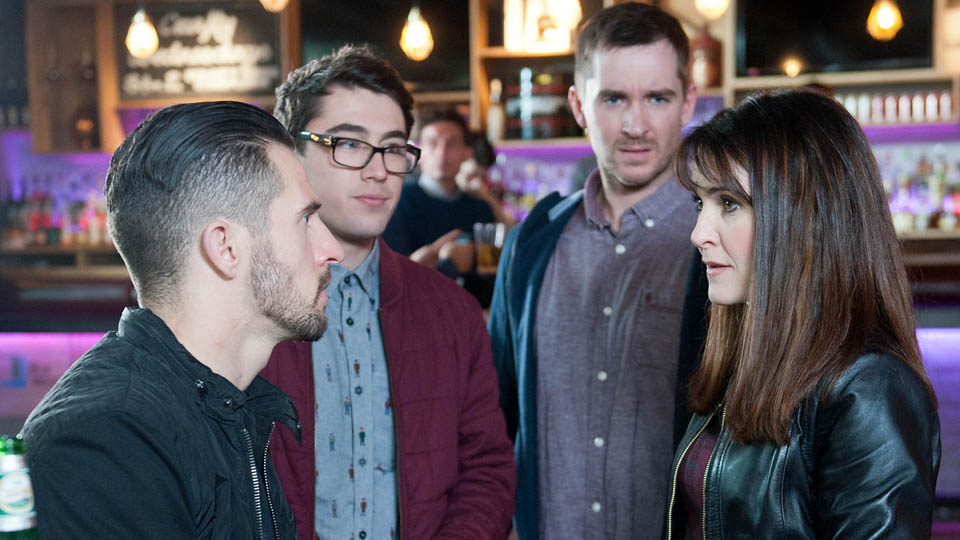 Emmerdale started 2015 with some big happenings in the little Yorkshire village and this week there’s even more events.  Read on…

Determined to cheer up Finn, Pete arranges a brother’s night out with him and Ross going along with Finn to a gay bar.  Ross is out of his comfort zone and it’s not long before he gets himself into a fight.  It’s Emma that arrives to tend to his wounds, neither initially realising who the other is.  Finn is shocked to see her and she soon puts two and two together as to who his drinking companions are.  Pete is annoyed when Finn invites her back to the village.

Later, Ross reveals to Emma how Moira and James slept together leaving her shocked and she gets even more of the story when James inadvertently reveals that Adam is his son.  A furious Emma blames him for ruining her family, but is left stunned when he reminds her the real reason she left.  Emma is grateful that James didn’t have the heart to tell his sons.

James is alarmed that Pete remembers more than he thought about the past and soon the pair are dredging up painful memories.  Pete confesses that he thinks he’s to blame for Emma never coming back.  What is it that Pete thinks he’s done?

Will Cain have the life-saving operation?

As Debbie, Moira and Adam watch over a sleeping Cain, his neurologist arrives and urges him to have the life-saving operation as soon as possible, but he refuses.  Moira is flabbergasted and won’t even talk to Cain until he signs the consent forms.  A distraught Debbie pleads with him to change his mind, but will his fear of dying on the operating table stop him having the operation?

It seems the pressure from his loved ones and the inevitability that he has to have this operation, wins through and all are anxious as the day of the operation arrives.  Moira is surprised to find Charity already at the hospital and is irritated by her presence, wondering just what she’s playing at.  Will Cain pull through this risky operation?

Megan wants to surprise Jai with a wedding, but Leyla has other ideas

Megan enlists Georgia’s help to throw a surprise wedding for her and Jai this week, tasking her with getting the groom to the registry office.  When she reveals her new plan to Leyla, she immediately offers to help, but is secretly heartbroken as she realises she still has feelings for Jai.

Leyla decides to have one last attempt at stopping the wedding and tells Jai how she feels.  As Jai tries to process the fact that he’s getting married so suddenly, he also has to deal with the fact that Leyla is throwing herself at him.  He tells Leyla to leave, but it’s not long before the pair are kissing.  Will the surprise wedding go ahead as planned?

The voice of Gemma continues to haunt poor Belle and this week she not only thinks that she’s to blame for Cain’s illness, but David is also worried that she may have stolen some Vodka from the shop.  Zak then notices money is missing from the Dingle’s pot and Belle is confused when Lisa accuses her of stealing.  Things get worse when Belle hears Sean’s been in an accident and that Gemma’s shrine has been trashed.

It’s initially Zak that thinks he’s cracked on to exactly what’s happening with Belle, but it takes Katie to confirm when she sees her acting oddly in the stables.  Belle begs her not to tell Zak and Lisa and then lashes out at Katie and runs off,  locking herself in the car.  When Zak and Lisa arrive, Zak puts his own life in his hands by standing in front of the car as Belle revs the engine.  Will he be able to get through to her or will she run him over?

Alicia is shocked when she walks in on Adam and Victoria kissing.

Aaron tells Robert he can’t go through with the business, because it’ll come between them, but is thrown when Robert reveals his feelings for him.

Lachlan gets a tattoo so he can be like his hero…David!

Sam finds a hungover Tracy sleeping in the barn and wants nothing to do with her.  Later, Val finds her stealing food at the B&B.