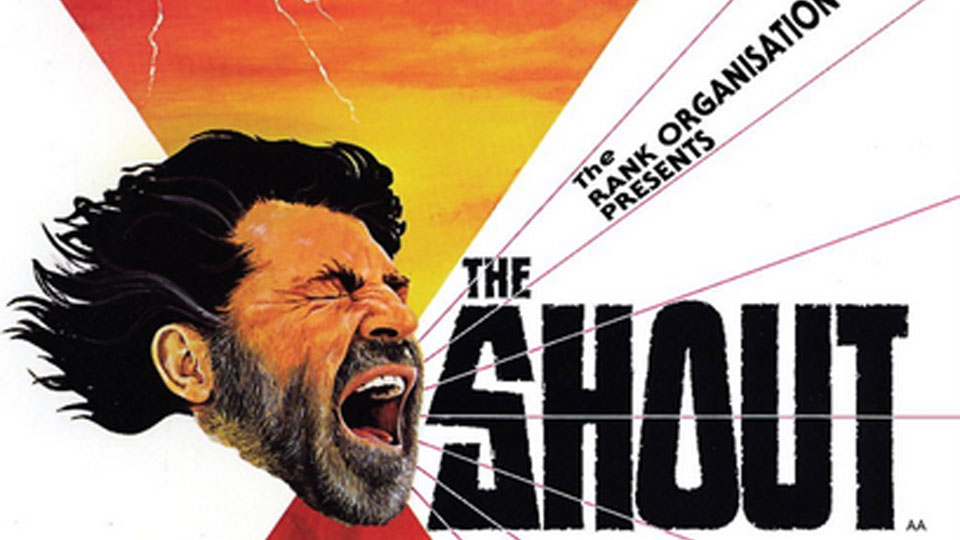 The Shout is a 1978 British movie adapted for the screen from a story by Robert Graves (I, Claudius).

Rachel and Anthony (Susannah York and John Hurt) lead a sedate and relatively-happily married existence in an old farmhouse in Devon, though Anthony is having a lukewarm affair with the cobbler’s wife (Carol Drinkwater). Into their unremarkable existence comes the enigmatic Crossley (Alan Bates) a man who has spent two decades wandering the Australian outback, and has returned to the UK with a deadly secret – a shout strong enough to kill.

This strange and unsettling film says something about the nature of mental health, since it is bookended by scenes in a psychiatric institution where, whilst a cricket match plays out on the green, Crossley (unreliably?) narrates the events of the story to the author Robert Graves (played by Tim Curry). Is it really about a man with a supernatural power who can be destroyed only by smashing a particular stone, or is it more about the recollections of a madman about his time with a couple in whose lives he became entangled?

Don’t expect any answers. The original choice for director was Nicolas Roeg, whose signature masterpiece is the rich, layered and mysterious Don’t Look Now.  Second choice Jerzy Skolimowski does a great job of building and maintaining a creepy, unsettling atmosphere, though the stark yet beautiful Devon countryside and coastline contributes greatly to the mood of the piece.

Alan Bates (The Go-Between) is sensationally good as Crossley. He glowers behind a thick black coat, staring malevolently, whilst keeping the right side of overacting through underplaying it vocally. John Hurt (Alien, The Elephant Man) and the late Susannah York (They Shoot Horses, Don’t They?) are equally good as the couple whose lives Crossley barges his way into. Hurt plays the kind of tortured soul he has always captured so adroitly, whilst Susannah York plays Rachel with shades of the expressiveness and sexuality that became the hallmark of her 1960s career. Watch out also for Robert Stephens (The Private Life of Sherlock Holmes) who is his usual ebullient self, joined in the cricket match by a young Jim Broadbent.

Although there isn’t much plot, and The Shout doesn’t give away too many answers, there is something undeniably intriguing about the film. The score, and the curious sequences as John Hurt composes music from sound, add greatly to the surrealist nature of the movie. The Shout is an overlooked gem that will appeal to those who enjoy a complex psychological drama.

Extras include a commentary with horror film enthusiasts Kim Newman and Stephen Jones, who may be able to unlock some of its secrets, as well as the usual theatrical trailer and image gallery. It is released in its original 1.75:1 ratio, which will fill the screen of most high-definition televisions.

The Shout is released as part of Network’s The British Film Collection.