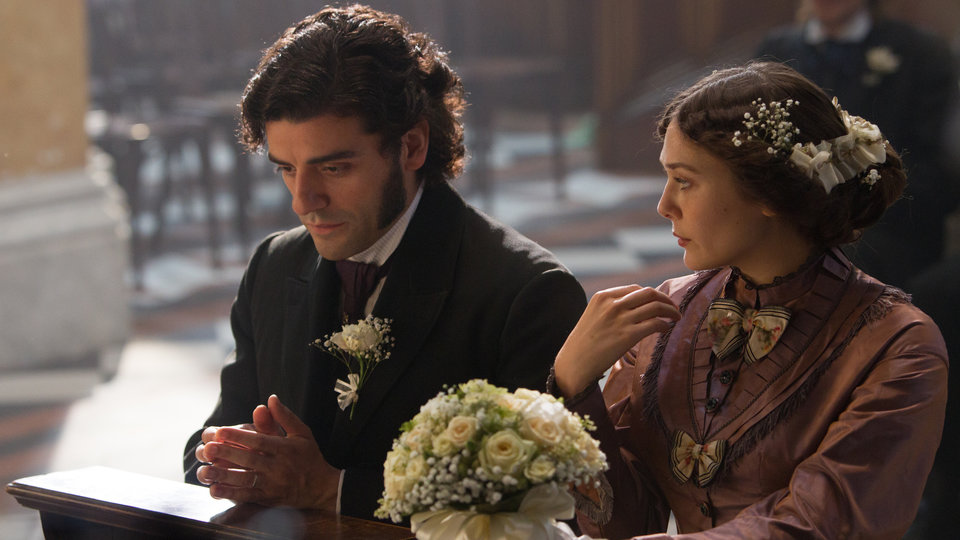 In Paris during the mid-to-late 1800s, Thérèse Raquin (Elizabeth Olsen), a repressed young woman, is forced into a loveless marriage with her sickly cousin Camille (Tom Felton). Thérèse works with his mother Madame Raquin (Jessica Lange) in a small shop all day whilst quietly yearning for excitement and passion. This arrives in the handsome form of Camille’s old friend Laurent (Oscar Isaac), a charismatic man who takes an instant liking to her. A passionate affair begins and starts a dangerous chain of events that threatens to shatter the lives of everyone involved.

An erotically-charged period drama starring Oscar Isaac and Elizabeth Olsen should have been an instant win but it sadly falters towards the end. In Secret promises much and is a very well made movie, full of solid acting talent and sound direction. But there’s a distinct lack of verve and seductive pull here – given the subject matter, this is a big omission.

Elizabeth Olsen handles the lead well and Oscar Isaac oozes forbidden lust in the film. With both actors firmly on their way to super-stardom, In Secret provides them with a nice project to get some character-range. I feel both will have transcended to a higher calibre of project in a few years, especially by the time Isaac is done with J.J Abrams new Star Wars franchise. They both sell the lust factor but the film never ventures into risqué territory – something it could have actually benefitted from. Everything feels very predictable and as such, doesn’t give their ‘forbidden’ love the impact and desire it perhaps should have had. But that’s at no fault of the two actors – it’s just a stylistic choice by the director.

Jessica Lange is revelatory and steals every one of her scenes as the matriarch of the family. When required she pierces the screen with her trademark steely resolve and manages to get the most from a competent but pedestrian script. Harry Potter’s nemesis Tom Felton does very well as a sickly waif of a man who gives Thérèse an easy choice when adultery rears its head.