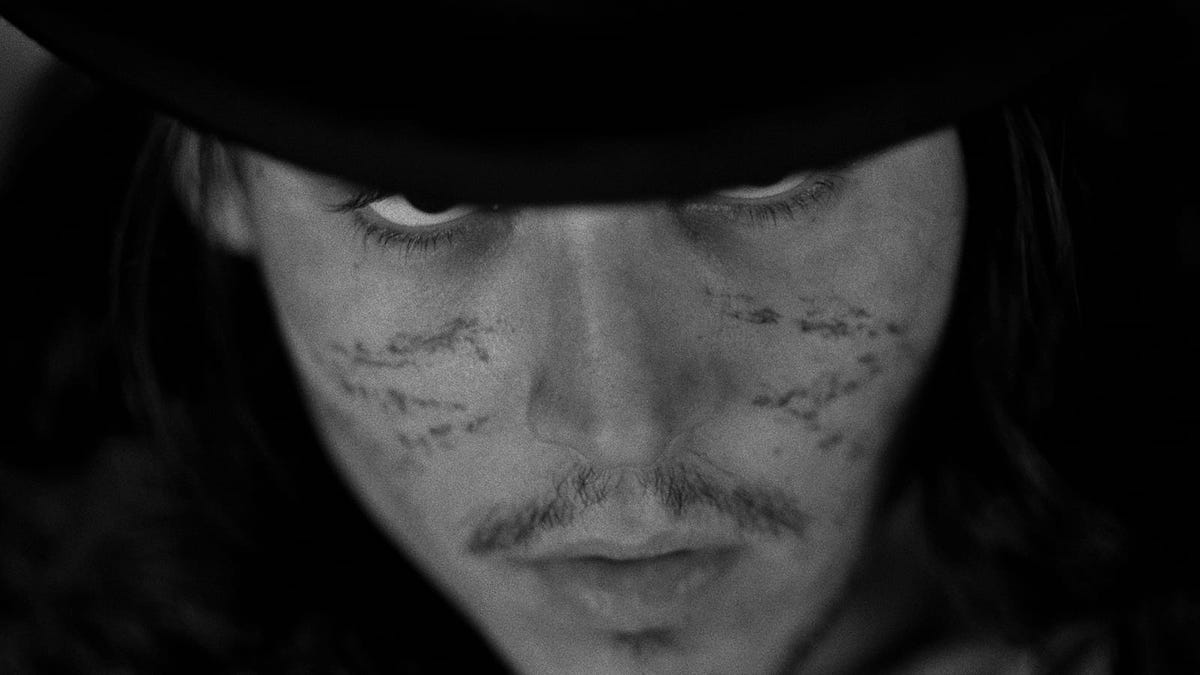 As a teenager, ‘Dead Man’ was one of the first independent films I ever discovered, and as such it holds a special place in my heart. It was also one of the last VHS tapes I still kept hold of even after the format was practically obsolete. I assumed it would be one of those films that might be difficult to acquire in the future. That wasn’t quite the case, as it did eventually get a few DVD reissues in the UK, but it has now been afforded the honour of a pristine new 4K restoration from Criterion.

Written and directed by indie auteur Jim Jarmusch, ‘Dead Man’ was something of a departure from his previous work. With ultra low budget films such as ‘Stranger than Paradise’ and ‘Down by Law’ he had established him as a hip arthouse filmmaker, and had developed a cult following. Suddenly afforded a much higher budget, and a remarkable cast of character actors, Jarmusch set out to create his masterpiece.

Shot in stark monochrome, ‘Dead Man’ begins with tenderfoot accountant William Blake (Johnny Depp) travelling from Cleveland to Machine, a hellish frontier town out west. He is to take up the accountancy role at the town’s metal works owned by Mr Dickinson (Robert Mitchum). When Blake is informed that the position he thought was his has already been filled, he finds himself penniless and alone in this godforsaken outpost.

He is then caught in the middle of a lover’s quarrel, which leaves him with a bullet in the chest, and the son of Mr Dickinson shot dead. Wounded, and now wanted by the law, Blake goes on the run, where he is assisted by Nobody (Gary Farmer) a Native American without a tribe. Nobody guides the slowly dying Blake on a spiritual journey, as bounty hunters and law men close in on them.

‘Dead Man’ is one of the most visually unique films of the 90s. A striking and thoughtful vision of the mythological western, it is easily labelled as revisionist, but there is so much more going on here than just taking a subversive look at a familiar genre. Arguably, no genre has whitewashed history to quite the same extent as westerns. Jarmusch’s meticulously crafted and researched film is one of the most authentic and respectful depictions of Native American culture, history, and language.

There’s poetry in the script and in the images on screen. Impressionistic and elegiac, ‘Dead Man’ is also brutally violent and darkly funny. Johnny Depp, almost expressionless and deadpan throughout, gives one of the performances of his career as Blake. He is the quiet centre of the film, whilst scenery—and even human flesh—is chewed by the stellar supporting cast, which includes Lance Henriksen, Crispin Glover, Michael Wincott, John Hurt, Iggy Pop, Gabriel Byrne, and Jared Harris.

The disc is garnished with an excellent selection of extras, beginning with an audio commentary recorded in 2016 with sound mixer Drew Kunin and production designer Bob Ziembicki. Q&A with Jim is an audio only piece, with Jarmusch in a recording studio answering questions sent in from the public. There are some excellent questions, and Jarmusch gives terrific, insightful answers.

Next up is an in-depth interview with actor and musician Gary Farmer recounting his experiences of the film. This is followed by audio recordings of actor Alfred Molina, Mili Avital, and Iggy Pop all reading excerpts of William Blake poetry. The recordings play over location scouting photos taken by Jarmusch in California, Oregon, Nevada, Montana, Idaho, Washington, and Wyoming.

There are 15-minutes of unrestored deleted scenes, which provide a vivid example of how great the 4K restoration is. Up next is 25-minutes of amazing footage shot by Jarmusch showing Neil Young composing the score, which he appears to almost be improvising whilst watching a projection of the film. There is also a music video for a song from the film, which can be watched with optional audio of Johnny Depp reading a William Blake poem.

Finally, there is a gallery of on-set and promo stills in colour, and the films original trailer. The booklet also comes with essays by critic Amy Taubin and music journalist Ben Ratliff.