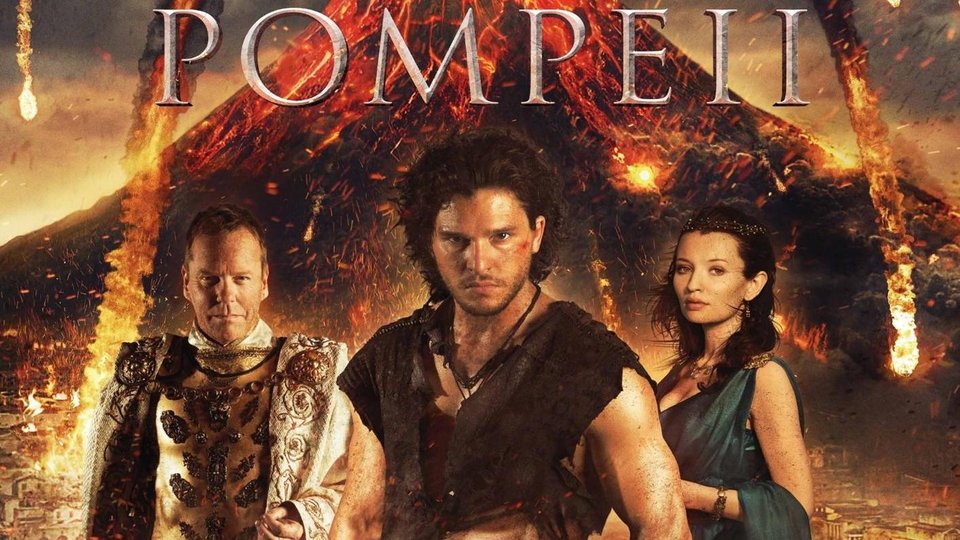 It’s 79 A.D. and Milo (Kit Harington – Game of Thrones), a slave turned gladiator crosses paths with the beautiful Cassia (Emily Browning – Sleeping Beauty), the young daughter of a wealthy merchant. When she draws the unwanted romantic attention of Roman Senator Corvus (Kiefer Sutherland – 24) too, Milo springs into action to defend her honour. In the meantime, Mount Vesuvius is about to erupt and lay waste to the land. Milo is in a race against time to rescue his true love from Corvus as the famed city of Pompeii literally comes crashing down around him.

The early signs were that Pompeii would be the worst film of the year. Thankfully this isn’t the case. It’s not ‘good’ in the traditional sense of the word but it certainly is watchable, thanks largely to Kit Harington’s performance and some decent special effects that lay waste to the infamous Pompeii in spectacular fashion.

Game of Thrones has propelled Harington into his first leading role and he embraces the opportunity well. He clearly has charisma and can handle the action quota impressively. 24 star Kiefer Sutherland must have lost a bet; that’s the only logical reason as to why he is even in this film. Taking inspiration from the Carry-On movies, Sutherland plays an evil Roman Senator with so much preposterous camp, it’s actually hilarious to watch. His accent shifts between American and Cockney as he deviously chews away at his scenes without a care in the world.

Emily Browning has little to do other than look pretty and in distress (she obliges). Lost star Adewale Akinnuoye-Agbaje, whose inclusion in a movie usually heralds a big warning light, actually does well as a clichéd fellow gladiator named Atticus who strikes up a friendship with Milo. Carrie-Anne Moss and Jared Harris round off the principal cast and do what they can with their thin characters.

Pompeii isn’t nearly as bad as you’d think with a decent level of action and adventure that certainly entertains. Tonally it’s all over the place and there are some hammy performances to be found but on the whole, this is one of Paul W.S. Anderson’s better efforts. The effects are impressive and utilise 3D well, with fire and ash flying at you from every angle. With Kit Harington proving that he has distance past the confines of Game of Thrones, Pompeii at least kicks off the summer campaign with a bit of bang for your buck.