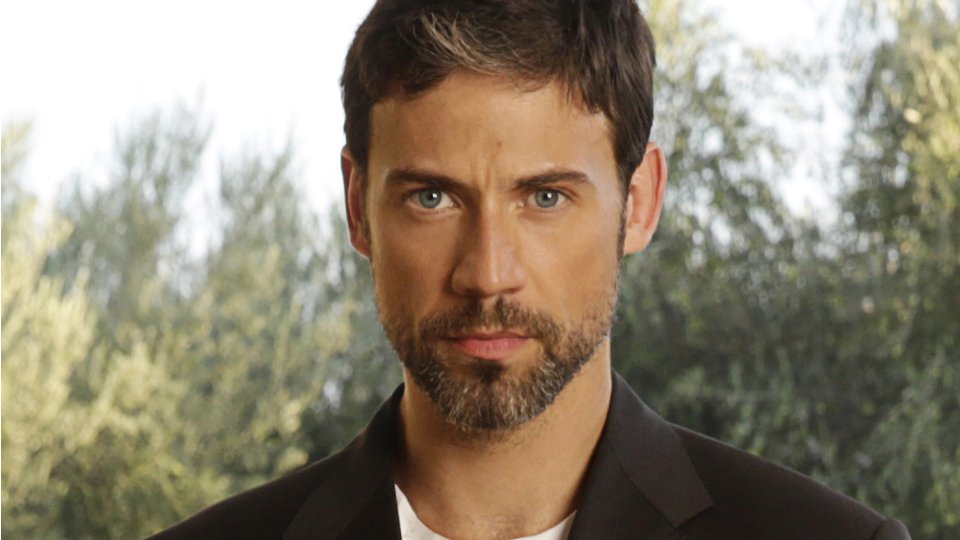 English actor Adam Rayner has been on our screens in a number of shows including The Line of Beauty, Mistresses and Doctor Who.

For his latest role he’s playing the lead character of Bassam ‘Barry’ Al-Fayed in political thriller Tyrant. The show has already aired its first season in the US to much critical-acclaim and finally arrives in the UK this week.

We caught up with Adam to find out all about Tyrant, discuss the political nature of the storylines and to find out what it was like to film such a hard-hitting show.

Tyrant starts in the UK this week. What’s the show all about?

The basic premise is that you take the second son of a fictional Middle Eastern dictator who has turned his back on his background, moved to the States, trained as a doctor, married an all-American girl and had two kids. Through a family wedding he is drawn back to the country and through a series of events kept there. Initially reluctantly but bit-by-bit he is drawn back to the world that he has been trying to escape for 20 years, and possibly his own destiny and the realisation of who he really is is turned on its head.

Your character Barry aka Bassam, may not be quite as clean cut as you’re led to believe at the start of the first episode. That’s really explored in the opening episode isn’t it?

Yes. I hope that becomes clear and the full realisation of that journey takes the full season to really get a grip on. I hope that that is sufficiently suggested and made clear in the pilot. It is the idea that heroes are not as simple as they first seem and neither are militants. Here is a man that seems conflicted with himself and the world around him. He’s trying to be a good man and he’s trying to do the right thing but he’s going into a world where those concepts are fluid and extremely difficult to grasp with various shades of grey. He is a man who is struggling to figure out what his true destiny is.

Barry isn’t the only one in his family hiding secrets. We learn in the first episode that his son Sammy is hiding his true sexuality from his family. What can we expect from that storyline?

It certainly causes some problems. I have to say that some strands are picked up with great intensity and others aren’t. They go into that in some detail but the full implications of that is a slow burn. It might take beyond the first season to really see the implications of where that goes and Barry doesn’t even necessarily find out for a while.

What drew you to Tyrant in the first place?

I was just happy to get a call from these people. The pedigree of the writers and the producers is of a very high-end. I was just thrilled to get the call. Beyond that it was a fantastic script with a character you hope comes along in your career., someone who is deeply conflicted and yet compelled to engage decisively in the world around him. You just hope you get the call for a job like this a couple of times in your career and it’s one you really hope for.

Tyrant is a very brave show, particularly given the political climate in the world at the moment. Were you worried about the controversy that could bring?

I’m not really worried. It’s already been out in the States and it’s been extremely controversial. Some people loved it and some people hated it. I think you just have to embrace that. I’d rather be involved in a show that was polarising opinion and was original and challenging rather than another law/medical procedural show. It’s much more exciting even if you’re going to encounter some people that don’t buy into what you’re doing. It’s a much more exciting thing to inhabit.

What is it like filming some of the tougher and more violent scenes of the show?

Poor old Ashraf (who plays Barry’s brother Jamal) gets the brunt of that. I don’t do quite so much of that. It’s tough. Anything that’s physical and violent is hard. You’re on edge and it pushes you as a person closer to the area that the character inhabits. If you have to slam someone against a wall half-naked in a steam room tensions run high and you very much feel connected to what you’re doing. It’s exhausting and it can be stressful.

What’s been your favourite thing so far about being involved with Tyrant?

That’s a good question. My favourite thing has been engaging in the creative process of this brand new creature being born. Not to overstate my role but we discuss the scripts when they come in and I input to some degree. That sense of being at the beginning and involved with something that is wholly original has certainly been the most exciting thing.

Your character Barry is the lead but the show has a large ensemble. What has it been like to be a part of that?

Pretty much every show you look at these days has a large ensemble cast. For me it’s great because you get to work with a lot of great actors and different people so you never feel like you’re getting into a routine with new people popping up. There’s already a widespread of storylines to go back to. I think it can only be a good thing as long as it’s not pushed to the degree where the audience completely lose track of who they’re expected to be watching or interested in. It’s absolutely crucial in keeping the audience on their toes and interested to have a broad spread of storylines.

Why should viewers in the UK give Tyrant a go?

You should watch Tyrant because it’s unlike any show you’ve seen before. It’s the first time that the Middle East has been brought to life with an almost entirely Middle Eastern cast of characters telling a compelling story within that foreign environment but making it understandable for a Western audience. I would say tune in because it’s unlike any other show that people will have seen before.

What else do you have coming up at the moment?

I’m the bad guy in a Taylor Lautner movie, which will give everyone a laugh. We’re waiting to hear about a second season for Tyrant but until then I’m available for hire.

The figures have been very strong. It’s a tricky show to produce and we ran into problems in Israel at the end of the shoot with the tragedy of the conflict. I’m very optimistic but you never know.

Tyrant begins in the UK on Friday 12th September at 9pm on FOX.

Advertisement. Scroll to continue reading.
In this article:Adam Rayner, Tyrant