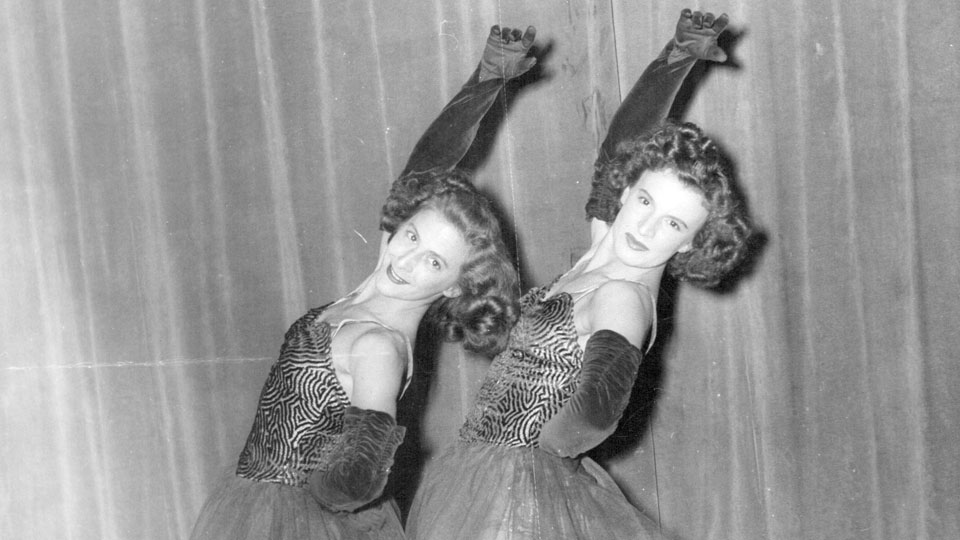 Twins Peggie and Mollie Bensaid from Chislehurst Kent, are celebrating the launch of their memoir at the Churchill Theatre, Bromley on Wednesday 9th July.

The sisters, who are in their tenth decade have written All The World’s A Stage, a book about their life as theatrical entertainers. They have chosen The Churchill Theatre for the launch as they performed at the theatre which preceded it, the New Theatre, Bromley. This was the pantomime Cinderella in 1936/37 when the sisters were aged 14.

As teenagers the girls joined Beam’s Breezy Babes, a juvenile dance troupe and in 1938 they became Ovaltinies, touring all round Britain. Later, managed by Joan Collins’ dad, Joseph, Mollie and Peggie were recognised as Britain’s leading twin act. Their 10-minute dance and acrobatics showcase was a hit in variety theatres and Butlins summer camps across the country.

During the Second World War, the twins were snapped up by ENSA (the Entertainments National Service Association) and later the American Red Cross, where they were joined by a young talent by the name of Bruce Forsyth. Mollie and Peggie estimate they performed 1,200 times during the war. After the war, performances at the Palladium followed with Tessie O’Shea and Tommy Trinder, and in 1954 they formed The Three Buffoons, Britain’s only girl clowns, working with Laurel and Hardy, Shirley Bassey and Tommy Cooper.

Later they became ballroom dancers, both winning the Supreme Award and today Peggie and Mollie live happily together in their home full of theatrical memorabilia and memories in Kent.

The Bensaid twins’ charming memoir takes you on a joyful journey encapsulating 70 years on the stage. The event takes place from 2pm until 4pm and will include a Q&A with Peggie and Mollie, a display of their costumes and theatrical memorabilia, as well as the chance to buy a signed copy of their memoir and a performance from barber shop choir The Kentones.