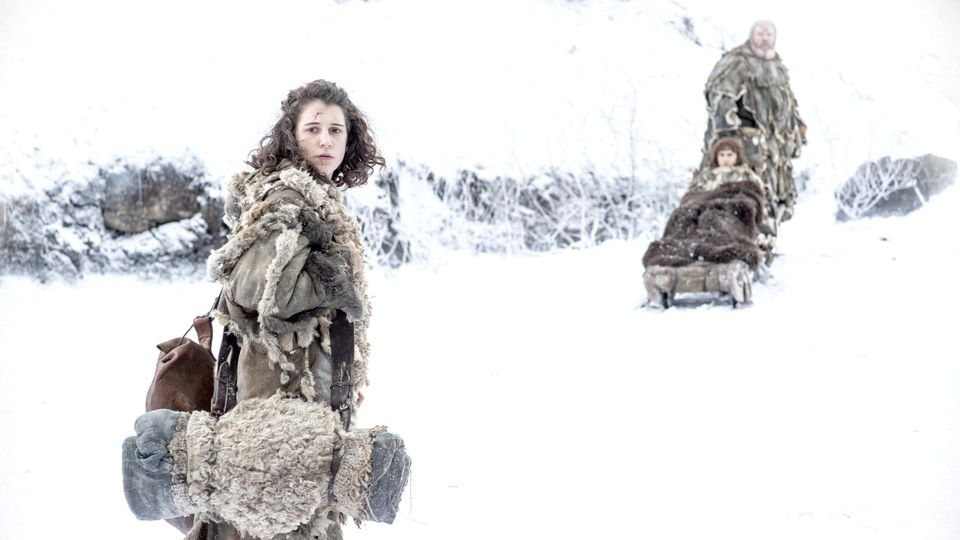 Last week’s episode, The Watchers on the Wall, took a break from the usual format of jumping around the Seven Kingdoms to focus on Jon Snow and the Night’s Watch in their attempt to defend the Wall and keep everyone safe.

If you haven’t seen the season finale of Game of Thrones and don’t want anything spoiled then please stop reading now. If you are up-to-date and want to relive the action then keep on reading.

The Children is the tenth and last episode of the fourth season. It is written by showrunners David Benioff and D. B. Weiss with Alex Graves taking to the director’s chair for the fourth time this season.

The episode opened up where last week’s left off with Jon Snow (Kit Harington) walking away from the wall unarmed. He’s off in search of Mance Rayder (Ciarán Hinds) in an attempt to assassinate him. As he departs we see the dead giants lying near the tunnel gate before a shot from the top of the wall shows us hundreds of bodies.

As Jon makes his way through the nearby woods he is surrounded by Wildlings. He has no choice but to surrender himself. After doing so he is taken before Mance where he pretends he is looking for a way to negotiate an end to the conflict. They talk of recent happenings and drink to Ygritte.

We then get to hear Mance’s side of the story where he explains that he wants peace and his army is looking to pass the wall in order to escape the White Walkers. Jon spots a knife and at the same time Mance realises why Jon is actually there. Before either of them has a chance to react the camp is attacked by soldiers on horseback. Whose army could this be?

The Wildlings are caught completely by surprise and their camp is overrun as many of them are slain. We soon see that the army is led by Stannis Baratheon (Stephen Dillane) with Ser Davos (Liam Cunningham) at his side as usual. Mance has no choice but to surrender however he refuses to kneel before Stannis. After listening to Jon he agrees to take Mance prisoner rather than kill him.

In King’s Landing we see that Ser Gregor “the Mountain” Clegane (Hafþór Júlíus Björnsson) is barely still alive after his battle with Oberyn. Grand Maester Pycelle (Julian Glover) is certain he will die from his wounds but Qyburn (Anton Lesser) seems strangely optimistic. Cersei (Lena Headey) tells him to do whatever possible to save him. It looks like saving him will involve some unusual methods and we’re more than a little worried and curious when he says the process “may change him”.

Cersei then confronts her father, Tywin (Charles Dance). She tells him that she will not be marrying Loras Tyrell. If he continues to force her then she will announce the truth of her incestuous relationship with her brother Jaime (Nikolaj Coster-Waldau). Leaving Tywin thinking she is bluffing she then goes to Jaime where she confesses her love for him. We’re not convinced she means it.

Across the Narrow Sea we see Dany (Emilia Clarke) visited by one of her older citizens. To her surprise he requests permission to return to his slave duties for his former Master. He explains it’s the only way he knows to live and after listening to him she decides to grant his request for a year. Ser Barristan thinks it’s a bad idea but she wants to keep her people happy.

Her next visitor carries the charred remains of his 3 year-old daughter. It turns out that she was killed by Dany’s dragon – Drogon. It seems that they are starting to get out of control and Drogon hasn’t returned. As a precaution she takes her other two dragons to the catacombs and chains them up. As she seals them away she is visibly upset made worse by the cries of her babies.

Back at Castle Black Master Aemon and the remaining Night’s Watch hold a funeral for their fallen brethren. Jon Snow, Stannis and Davos are in attendance and the bodies are burnt. Melisandre is also present and she gives Jon a suspicious look – we wonder what plans she has for him. At the request of Tormund Jon takes Ygritte’s body north of the wall before burning her so she is back where she belongs.

Beyond the Wall we join Bran (Isaac Hempstead-Wright), Hodor (Kristian Nairn), Jojen (Thomas Brodie Sangster) and Meera (Ellie Kendrick). They appear to be struggling with the conditions and look ready to give up. Suddenly Jojen announces that that have arrived at their destination as the come across the large Heart Tree that Jojen has been seeing in his visions.

Here they meet a bizarre old man who Bran recognises as the three-eyed raven who has been following them. The old man confesses to watching them and tells Bran than although he will never walk again he will fly! This plotline just gets weirder.

In the Vale (as we predicted) Brienne (Gwendoline Christie) and Podrick (Daniel Portman) stumble across Arya Stark (Maisie Williams) and The Hound (Rory McCann). After Pod recognises The Hound, Brienne deduces that the girl with him must be Arya and tells of her oath to keep her safe.

The Hound isn’t convinced as she is kitted out with Lannister armor and Jaime’s Valyrian steel sword. The pair soon do battle (as we also predicted) and one of the best fight scenes Game of Thrones has had ensues.

Brienne almost matches The Hound in size and it’s a brutal fight. She soon realises that in order to win/survive she has no choice but to fight dirty. We’ve no idea which way it will go as the fight nears the edge of a cliff. Finally Brienne is victorious as she sends The Hound tumbling over the edge.

After the fight they realise Arya has gone and they try and find her. She goes to The Hound and he asks her to kill him. Instead she steals his money and cruelly leaves him begging to die. She rides to a harbour where she buys passage to Braavos thanks to the coin given to her by Jaqen H’ghar.

Finally we head back to King’s Landing to see what happens to Tyrion (Peter Dinklage). He’s locked back in his cell awaiting his execution after Oberyn failed to win his freedom. Suddenly the cell door bursts open and it’s Jaime who has arrived to set him free! Yay!

Instead of escaping as Jaime suggests Tyrion heads to the Tower of the Hand. He heads to his father’s room and finds Shae (Sibel Kekilli), his former lover, in Tywin’s bed. After being betrayed by her at his trial this is too much for Tyrion and he strangles her to death in a fit of rage. Afterwards an emotional Tyrion apologises to her lifeless body.

Next he grabs a crossbow and goes in search of Tywin. He finds him sat on the loo and points the crossbow at him. Tywin isn’t convinced Tyrion will harm him and tries to talk his way out of the situation.

When Tywin talks of Shae he calls her a whore and this prompts Tyrion to shoot a bolt into his chest. Ignoring the warnings not to say it again Tywin prompty does so and so Tyrion shoots a second bolt which kills him. Hooray!

Tyrion then heads off to escape as Jaime planned and meets Lord Varys (Conleth Hill). Shortly after we see Tyrion being smuggled onto a ship in a crate. As Varys turns to leave the bells of King’s Landing begin to ring. This must mean Tywin’s body has been discovered so Varys joins the crate on the ship.

What another fantastic episode and superb ending for season four. Events are in motion for season five and we can’t wait to see how they play out.

Let us know your thoughts on The Children in the comments below as well as your hopes for the season five. No spoilers though please!

Game of Thrones will return in 2015 for season five and then again in 2016 for season six.

Advertisement. Scroll to continue reading.
In this article:Game Of Thrones, The Children