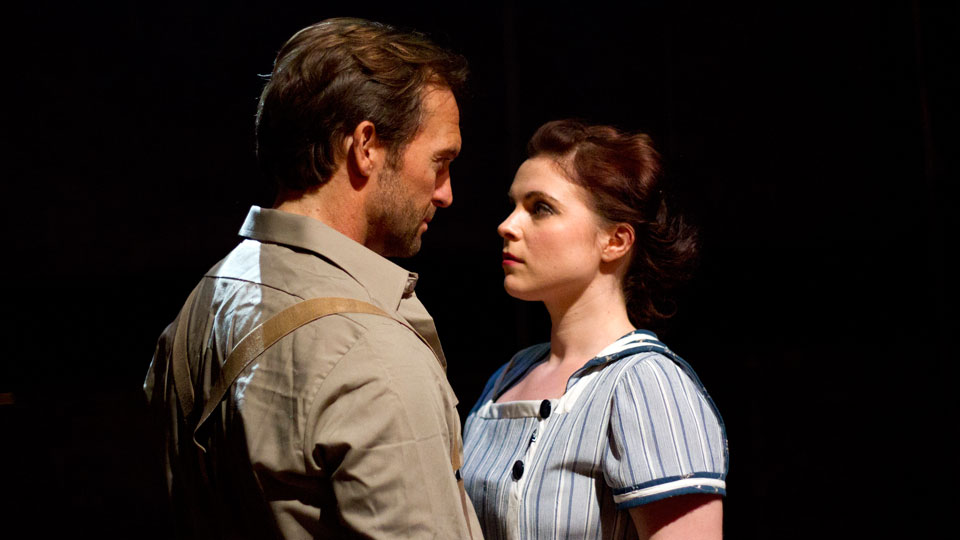 It’s great to see classic musicals revived, especially when the production shines a startlingly original light on old favourites. Morphic Graffiti are leading the way in this endeavour, and their production of Rodgers and Hammerstein’s Carousel is playing at the Arcola Theatre in Dalston until 19th July.

Carousel follows the story of Julie Jordan (Gemma Sutton) who meets carnival worker Billy Bigelow (Tim Rogers). Their relationship costs them their jobs and, in harsh economic times, it becomes tempestuous, with Billy forced into bad company and extreme measures to try to provide for his family.

One of the most effective aspects of this production is the transposition of the period from 1875 in the original to the Great Depression era. Instantly this makes perfect sense, and the concern of Billy’s unemployment automatically heightens. Far from tampering with a classic, the 1930s setting is a stroke of genius and brings out the best in the show.

Stewart Charlesworth’s adaptable set impresses. The semi-circular arcs create many impressions and effects. The choreography by Lee Proud also contributes to the success of the production, most especially with moments of ballet, such as when Louise (Susie Porter) flirts with young men. The busy stage for the carnival scenes and the ensemble singing June Is Bustin’ Out All Over (we guarantee you’ll be humming it all the way home) comprise other moments that dazzle and delight.

There are a few downsides to the musical itself. Whether or not you’re prepared to accept the daft celestial twist the plot takes in the second act is a matter of taste: but as far as we’re concerned it jars after a naturalistic opening two hours. There’s also the domestic abuse that Billy inflicts on Julie that, in a modern show, would have to be examined more closely and not so easily glossed over. Pacing is uneven: running to almost three hours, the story feels ponderous in places and rushed in others (Billy and Julie decide to get married five minutes after meeting with no suggestion that any time has moved on).

Those concerns aside, Carousel remains an engrossing and emotionally rich story which has stood the test of time. The musical score is beautiful (far better than the book), and hearing it performed by a talented group of musicians is an unparalleled delight. The band is note perfect, but there has to be a special word for the harpist, whose solo accompaniment to You’ll Never Walk Alone is one of the highlights of the production.

The two leads are magnificently cast and make the roles their own. Tim Rogers is in impressive form and fine voice as Billy Bigelow – not the easiest character to convey sympathetically, but he manages this well enough. Gemma Sutton is one again magnificent, bringing rich detail to the part of Julie, and hers is the standout performance of this production. Out of the supporting actors, it’s Richard Kent’s sly, funny and dangerous Jigger Craigin that catches our attention the most.

On the press performance that we saw, there were a few too many performers fluffing and forgetting lines as well as occasionally being slow on their cues to pass without comment. Whilst this is a fast-paced and heavy show, such lapses need to be tidied up. For the most part, the intimate space works in the production’s favour, bringing the audience close to Julie and Billy. However, it did leave the actors struggling for space and crashing into the set at times. We’ve not allowed these unpolished moments to count against our overall high rating of the show, since we’re sure that once it properly beds in, such teething problems can be overcome, leaving Carousel a thoughtful and well-cast revival of a classic that will be adored by aficionados of musical theatre.