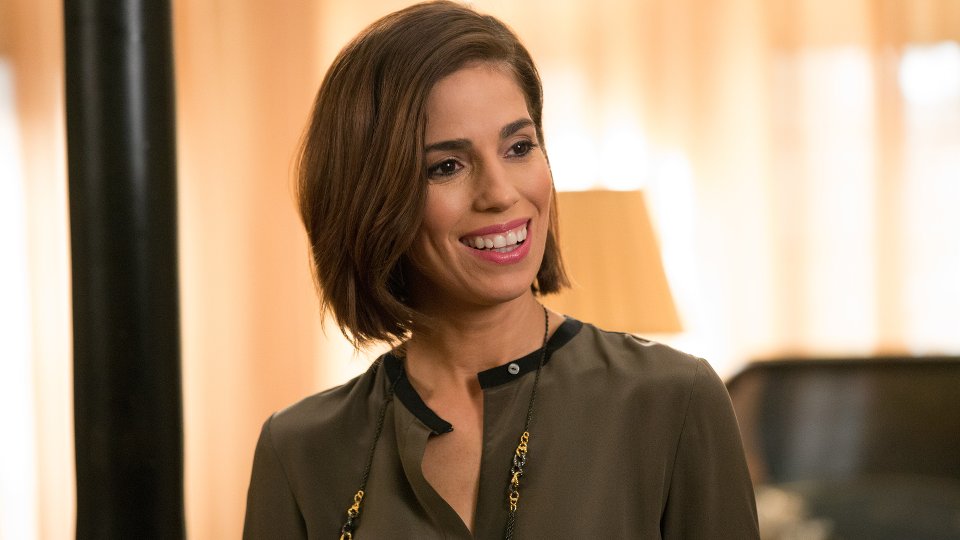 Ana Ortiz was catapulted to international stardom when she landed the role of Hilda Suarez in hit ABC comedy Ugly Betty.

Starting her career in theatre, Ana has enjoyed a varied career on the big and small screen with roles in shows such as Hung and Revenge. Now Ana is leading an impressive ensemble on Devious Maids, the latest show created by Desperate Housewives’ Marc Cherry and produced by Eva Longoria.

In the show she plays Marisol Suarez and in the first season she went undercover to find out who killed a maid that her son was wrongly imprisoned for. The second season recently started in the UK and Marisol is now is a new relationship with wealthy Nicholas Deering (Mark Deklin) but all isn’t as it seems.

We caught up with Ana when she was in London recently to talk about the second season of Devious Maids, find out what’s to come and discuss the possibilities that lie in Marisol’s future.

The second season of the show is five episodes in here in the UK. At the beginning of the season it’s a very different situation for Marisol than the first season…

It is. It’s something I was actually struggling with when I was acting because Marisol was so strong and so bold. Nothing could get in her way. This season Marisol is in love; she’s desperately in love and really wants to make this relationship work. There are all these red flags that she sort of has blinders on. She just wants this love and this marriage to work.

It’s understandable. She had a rough first season so you can’t blame her for wanting to be happy and enjoy a life without murder right?

(laughs) Yes right!  Exactly! Poor Marisol, tragedy does seem to follow her. It’s exciting because I also get this new family, this fabulous fiancé and this crazy maid now. For me the whole new season has been exciting and a completely different thing to the first season.

Let’s talk about Marisol’s relationship with Nicholas. As you mentioned she definitely has the blinders on but as the season progresses she’s really starting to realise there’s something a bit deeper there isn’t she?

I think with Marisol there’s only so far you can push her. Down deep she’s a tough cookie and even though she’s madly in love, with all the things that are getting thrown at her she will eventually throw down the gauntlet and say enough is enough somebody start telling me the truth. She really wants to see the best in these people and she really does want to make it work but things keep happening. She’s no dummy and pretty soon she’s going to fight back.

The dynamic between Marisol and Opal is really interesting. It’s safe to say they aren’t the best of friends isn’t it?

(laughs) No! That’s right. I think Marisol has this nemesis living in her house but she’s tough. Joanna Adler who plays Opal is so brilliant and we’ve had so much fun this season. She’s so menacing. It’s these two women who really have their own objectives and Opal’s objective is to get me out of that house and away from Nicholas. Marisol is a fighter and she’s not going to take it lying down for much longer. I think she’s been trying to give Opal the benefit of the doubt but you can only go so far with that.

The storyline for Marisol has taken her away from the other maids this season. Does that mean you don’t get as much time with your co-stars any more?

It does. That’s the unfortunate part. We always have the most fun when we get together and have our little gossip sessions. We all sit there and talk in Spanish. It’s just a good time. What’s been fun to play is that I didn’t know how the girls would be now Marisol’s had a change in status and she’s fabulously wealthy. Are they going to judge her for that? It’s been wonderful to have the honesty played out and I hope, if there’s a third season, that gets to be more fleshed out. I love the scenes with the girls. I’d also love to mix it up a bit more and see Marisol with the Powells – Evelyn and Adrian – and see what that would be like.

Marisol interacted with pretty much every character in the first season didn’t she? Our highlight was the relationship she had with Rosie, particularly when the two had something over one another…

Yeah! Exactly! I think we want to get back to that to see the girls reacting and having true friendships. That’s what you do: you fight, you love, you cry, you laugh and all of that stuff. To Marc’s (Cherry) credit it’s a big ensemble and he has all these different balls in the air. The girls didn’t get as much time together as we would have liked but there’s always third season…

We don’t want to give too much away for our readers but we know there are some big scenes coming up especially for Marisol and Nicholas. What can you tease for the rest of the season?

The power struggle will continue but the dynamics will change. Marisol definitely starts to control her destiny a little bit more. As it is in these doomed loves and a drama telenovela there’s going to be mayhem, I mean really crazy stuff goes down. Everything comes to a head. All the secrets will come out and you’re going to see what happens (laughs).

The second season is jam-packed with storylines isn’t it? There is so much going on this time round…

Do you see a possibility in Marisol’s future where she could lose her new-found wealth and is maybe on a more level playing field with the maids?

Definitely! In a Marc Cherry show you can never say never and that’s the wonderful thing about being on a novella; you can really push the envelope and you can really go campy. You can go to the really bizarre parts of the world and I think to Marc’s and Eva’s (Longoria) credit they brought in a cast that’s really good. Most of us are New York theatre actors. You have to play against the crazy and not to pat ourselves on the back too much, I think this ensemble is chock-filled with really good actors who, when you get a scene that is so outlandish, can bring some reality to it.

I think you never can tell where Marc is going to take it. Anything could happen. In the first season she was technically undercover as a maid so I don’t know that she would go back to being a maid but she might lose all the wealth. It’s a very big possibility but I hope not. I like being rich (laughs).

She definitely needs some happiness and a bit of a break doesn’t she?

Marisol is a very smart woman. If you were friends with her what advice would you give her?

She is smart and she just wants to be in love. I would tell Marisol that there are more fish in the sea and that this man is not the be all and end all. I would tell her to leave that house.

Would you not be tempted to tell her to get a new group of friends? These ones cause her a lot of trouble don’t they?

Yes! Lose those crazy people, take the maids and go live on an island somewhere and enjoy Marisol’s wealth…

I love it! Let’s do it (laughs) That’s the next season right there. I love it.

Devious Maids continues in the UK on TLC at 10pm on Tuesdays.