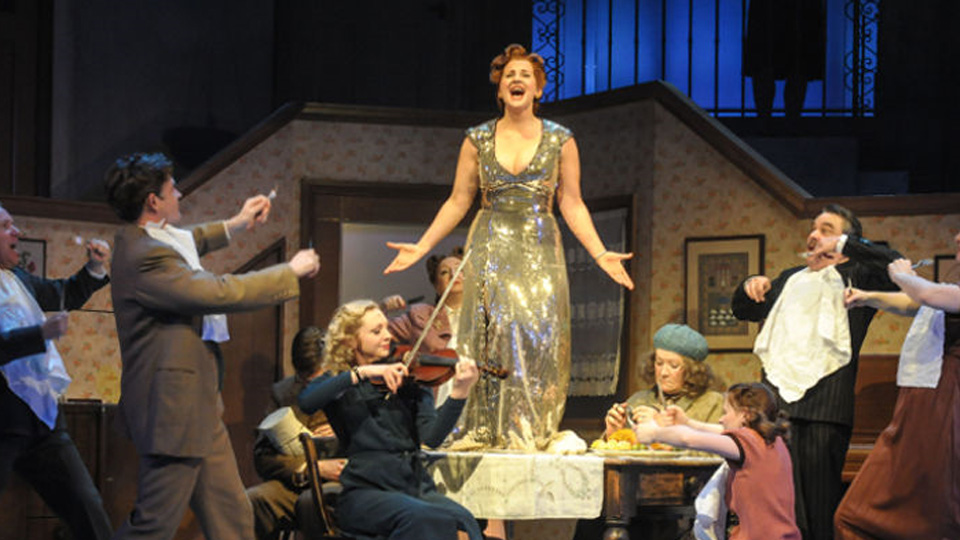 Betty Blue Eyes transfers to the West Yorkshire Playhouse this month as part of their ongoing Alan Bennett season. Adapted by the author from his film, A Private Function, the musical tells the tale of a Yorkshire community suffering the woes of post-war rationing. When opportunities arise for the procurement of some unlicensed meat, a farce ensues with a Betty the pig at its centre.

The story centres on Gilbert Chilvers, a newly arrived chirporator with more than a passing resemblance to Bennett himself. With tortoiseshell glasses and a foppish side-parting, Haydn Oakley assumes the role with a bumbling charm and warmth. He is joined by Amy Booth-Steel, providing a wonderfully racy portrayal of social climber Joyce Chilvers. Their partnership on stage is skilfully played, enlivening much of Bennett’s whimsical humour with cheek and charm. They are joined by Sally Mates as the aging and slightly senile mother-in-law – something of a Bennett trademark. Gluttonous, aggressive and possessive, Mates’ chaotic performance is a catalyst for laughter and one of the major highlights of the production.

Musical numbers in the show are enjoyable if not somewhat forgettable, comparable to a silly Sondheim in tone and verging into outright daftness. Purposefully lightweight, these aren’t tunes to wring out emotions or excitement, but rather to punctuate an ongoing comedy farce. Supported by some excellent choreography, the collective experience is nevertheless entertaining if not ephemeral, with most melodies quickly evaporating from memory.

A few problems with the staging of this show may have impacted on its aspirations for greatness. Transferring between three other houses, the touring set for Betty Blue Eyes appears constrictively end-on and rather linear, lacking the expansive depth which West Yorkshire Playhouse productions often achieve. In addition, problematic lighting proved distracting whilst some imperfect sound dynamics conspired to make dialogue occasionally indecipherable.

A particularly well-realised feature of the show is the puppetry devised for Betty Blue Eyes herself. Manipulated by an actor in full sight, Betty steals many of the scenes she appears in with subtle head tilts and postures. Charming and enchanting, the show’s title character is meticulously realised and will no doubt appeal to younger audiences.

With pig puppets, model motorcars and a toy town of characters on stage, this is Alan Bennett perhaps as Disney would conceive it. Light, twee, broad and farcical, Betty Blue Eyes is playfully quaint and presents a different shade to a season of theatre which has been subversively dark in Enjoy and intimately warming in Untold Stories. Something of an unfortunate piggy in the middle, Betty Blue Eyes is of a wholly different flavour, if not as delicious as its neighbouring productions.