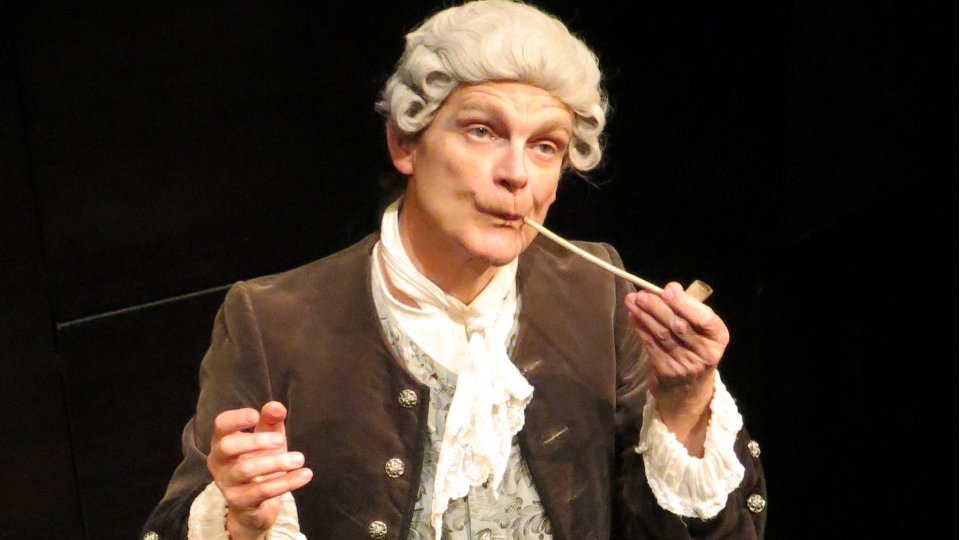 Bringing and breathing new life in to Laurence Sterne’s famous novel, The Life and Opinions of Tristram Shandy Gentleman, is Stephen’s Oxley’s adaptation in the form of Tristram Shandy – Conception, Cock and Bull. Stephen Oxley also plays the 18th century raconteur Tristram Shandy in this 21st century stand-up adaptation and one man show. Performing the work today, almost 250 years after it was first published, goes to show what a quality and timeless piece of literature it is.

Tristram entertains his audience with tales of his own conception, birth and life in general. If you think of aristocracy and perhaps something that divides the general feeling in Great Britain, of class and in which one you belong to, this show highlights this, by focusing and is highlighted in many elements. Tarquin, Theodore, Humphrey, what kind of men are you picturing? Can you imagine a man leading the country called Bob? Some of us can, whilst others wouldn’t fathom it. Can you imagine a road sweeper called Aristotle? Apparently a name means so much and judgements are immediately made, which is why Tristram was given such a name. Therefore, clearly, he was destined for great things…right? Perhaps. This section of the show had more than its fair share of cackles and laughter from the audience, many of whom looked extremely elegant themselves.

We learn about Tristram’s family, as they come in to the fold in the vein of tales of his somewhat draconian sounding father, the love affair of his uncle Toby, mistresses and more – vividly acted out, with accents, expressions and that Stephen manages to bob between with the greatest of ease.  We feel that the show does on occasion lose itself, with Tristram seeming to go off on a tangeant about whatever topic he is currently engrossed in and it’s sometimes hard to keep up. That said, the show is sharp, quick witted and eloquently told and we guess that one should not refrain from focusing attention and concentrating at all times whilst watching, if you take one sip of water and divert your gaze off him, he will have moved on and you will need to keep up.

There are times when you cannot take your eyes off him (certain parts of the show certainly made the elegant ladies in the room blush and look away) and Stephen Oxley plays the part wonderfully. Audience participation is always quite funny, more so than often for the onlookers, rather than the ones that are picked upon, although everyone that Tristram spoke to were charmed, laughed it off and even seemed to enjoy the moment.

If you picture in your mind the epitome of the quintessential, stereotypical English gentleman, then Tristram is everything that you can ever envision. This show would also be great for people visiting Britain, to get a glimpse of Britian from a by-gone era and wanting to learn a little more about our quirky and at times, eccentric little country and its inhabitants. The show is a well performed piece of work and does its job of telling the story of Tristram Shandy and transporting you to a whole different world and era.