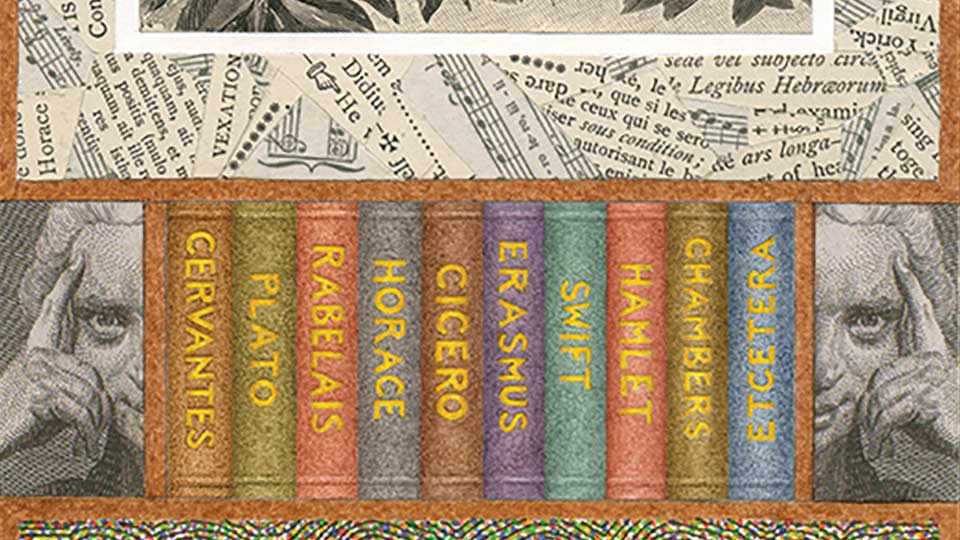 The Folio Society celebrates the work of Laurence Sterne (1713–1768) with this release of The Life and Opinions of Tristram Shandy, Gentleman, which is limited to 750 Copies.

There are few novels as unconventional as Laurence Sterne’s multi-volume, Eighteenth Century classic The Life and Opinions of Tristram Shandy, Gentleman. It is a fictional autobiography of hapless anti-hero Tristram Shandy, and nearly quarter of a millennium after its publication, it is revered as one of the greatest works of imagination in the whole of English literature.

A stunning new limited edition from The Folio Society pairs Laurence Sterne’s narrative, in the authoritative Florida edition, with the equally extraordinary Tom Phillips, who has designed, illustrated and signed this unique edition. Phillips has packed his instantly-recognisable collages with verbal and visual puns, to form the perfect pictorial counterpart to Sterne’s literary masterpiece.

Presented in an elegant burgundy slipcase blocked in shimmering metallic foil, this beautiful limited edition is simultaneously modern and redolent of the 18th century, its off-kilter lettering hinting at the delightfully unbalanced tale housed within.

Everything about Tristram Shandy is unusual, from its stream-of-consciousness style; its chronology, with sentences that start in one chapter and are completed in another, and the whole tale ending four years before Tristram has even been born. By doing this, Sterne rewrote the rules of novel-writing, and the result is a hilarious, compelling, joyful read.

Sterne was determined to give his readers a visual experience unlike any other book. Readers could turn from a blacked-out page, to a blank one, to a hand-dipped marbled page. Unlike most modern printings, The Folio Society replicated these just as Sterne intended, including unique marbled pages newly created by Jemma Lewis. As a result, no two copies of this exclusive limited edition will be identical.